Why the USA failed in Afghanistan

There are faults on both sides 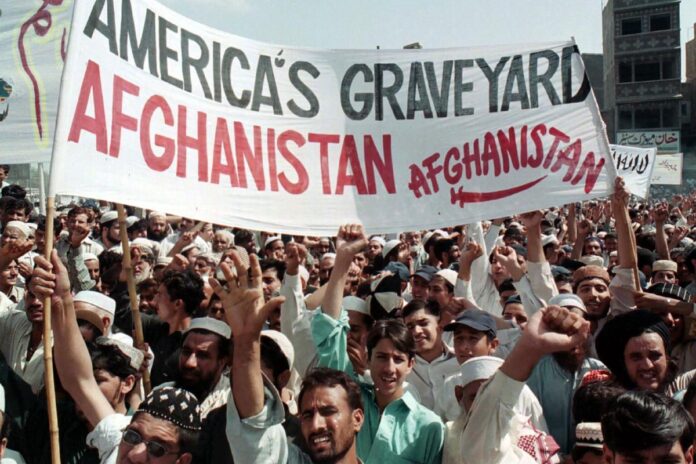 While the intra-Afghan dialogue still seems a non-starter in terms of any substantive progress on the political future of the country and the modalities of power sharing, the US and NATO troops have already started pulling out of Afghanistan, and the process, according to US President Joe Biden, would be completed by 11 September. The message is come what may, the USA is abandoning the ‘forever war’, not bothered about what would happen after it leaves Afghanistan without any agreement between the Taliban and the Afghan government.

It is indeed very worrying for the regional stakeholders who rightly have been advocating and supporting a settlement between the Taliban and the Afghan government before the US forces pulled out, more so Pakistan which has been playing a pivotal role in facilitating a peace deal between the USA and the Taliban, and the commencement of intra-Afghan dialogue. It is rightly feared that Afghanistan might relapse into factional fighting with frightening consequences for Afghanistan itself, as well the countries in geographical proximity with it.

After the 9/11 attacks although there were many avenues available to seek revenge from the perpetrators of the mayhem and striking a deal with the Taliban government in this regard, but the USA, inebriated by its military power and its streak of revenge, never bothered to explore those possibilities. Being unmindful of the historic realities it opted for employing its military might to seek revenge. The USA and its NATO allies succeeded in dismantling the Al-Qaeda network in Afghanistan and even dislodged the Taliban government. Their objective to seek revenge and assuage their ego had been achieved.

But it then made the mistake of democratizing the tribal society which for centuries had resisted any change and to transform its culture, which have proved to be the cause of its failure in Afghanistan. Now after spending trillions of dollars and loss of thousands of the lives of its allies and Afghans it has finally accepted its defeat and realized that it could not continue the forever war.

Unfortunately the deal between Taliban and the USA was thwarted by the Afghan government which was kept out of the dialogue and some of provisions of the deal still remain to be implemented. The intra-Afghan dialogue in Doha has failed to move ahead except for agreement on the modalities for dialogue. There is an ambience of mistrust between the stakeholders. Taliban prisoners have not been released as per the agreement and the names of their leaders have not been removed from the terrorist list.

The USA and the regional countries have also made commitments to help Afghanistan in the process of reconstruction and development in the post withdrawal era provided the parties reach an agreement on the future of Afghanistan. Therefore, the Taliban and Afghan government must revisit their positions for their own sake and in the interest of the regional peace. They may not get a better opportunity than this to establish peace in Afghanistan.

The Biden Administration came up with a four-point plan which also failed to make any headway. Russia organized a dialogue between the parties recently without any positive results.  Realistically speaking, both the Afghan government and the Taliban are responsible for the stalemate. The Taliban probably are more rigid in their approach. They even have refused to participate in the US-backed Istanbul Conference which was to be hosted by Turkey, Qatar and the UN, and designed to fast-track the peace process. They rejected the new date given by the Biden Administration for withdrawal of troops, saying it was a violation of the peace agreement signed with the Trump Administration.

However the efforts to convince the Taliban for resumption of the intra-Afghan dialogue and thus facilitating it have not been abandoned as yet. Pakistan, which reportedly is not happy with the Taliban stance and their inflexible attitude, is trying to exert pressure on them, even warning them of the consequences of non-agreement on the future of Afghanistan before a complete US and NATO withdrawal. Pakistan is the biggest stakeholder in peace in Afghanistan and would be the last country to want its efforts go down the drain.  At the same time it continues to make efforts at multilateral forums to facilitate peace in Afghanistan.

On April 30, representatives of the extended ‘troika’— comprising the USA, Russia, China and Pakistan— met in Doha, to discuss ways to support intra-Afghan negotiations and help the parties reach a negotiated settlement and a permanent and comprehensive ceasefire. The extended ‘troika’ also met representatives of Afghanistan’s negotiating team, of the Taliban and host Qatar. The Aghan government and the High Council for National Reconciliation were asked to engage openly with their Taliban counterparts regarding a negotiated settlement. The ‘troika’ unequivocally emphasized that it did not support the establishment in Afghanistan of any government imposed by force.

The joint statement issued by the troika condemned in the strongest terms any attacks deliberately targeting civilians in Afghanistan and called on all parties to respect their obligations under international humanitarian law in all circumstances, including those related to protection of civilians. It pointed out that that there was no military solution in Afghanistan and a negotiated political settlement through an Afghan-led and Afghan-owned process was the only way forward for lasting peace and stability in Afghanistan. The statement said “We expect the Taliban to fulfill its counterterrorism commitments, including preventing terrorist groups and individuals from using Afghan soil to threaten the security of any other country; not hosting these groups and preventing them from recruiting, training, and fundraising. We expect the Afghan government to continue counterterrorism cooperation with the international community,”

Addressing the Taliban, the statement reiterated its call on all parties to the conflict in Afghanistan to reduce the level of violence in the country and on the Taliban not to pursue a spring offensive. The statement emphasized that any peace agreement that is agreed upon must include protections for the rights of all Afghans, including women, men, children, victims of war, and minorities, and should respond to the strong desire of all Afghans for economic, social and political development including the rule of law.   A call was made for a durable and just political resolution that will result in the formation of an independent, sovereign, unified, peaceful, democratic, neutral and self-sufficient Afghanistan. The statement also supported a review of the status of designations of Taliban individuals and entities on the UN 1988 sanctions, as stated in the UNSC resolution 2513 (2020) noting that practical measures to reduce violence and sustained efforts to advance intra-Afghan negotiations by the Taliban will positively affect this review process.

The USA and the regional countries have also made commitments to help Afghanistan in the process of reconstruction and development in the post withdrawal era provided the parties reach an agreement on the future of Afghanistan. Therefore, the Taliban and Afghan government must revisit their positions for their own sake and in the interest of the regional peace. They may not get a better opportunity than this to establish peace in Afghanistan.