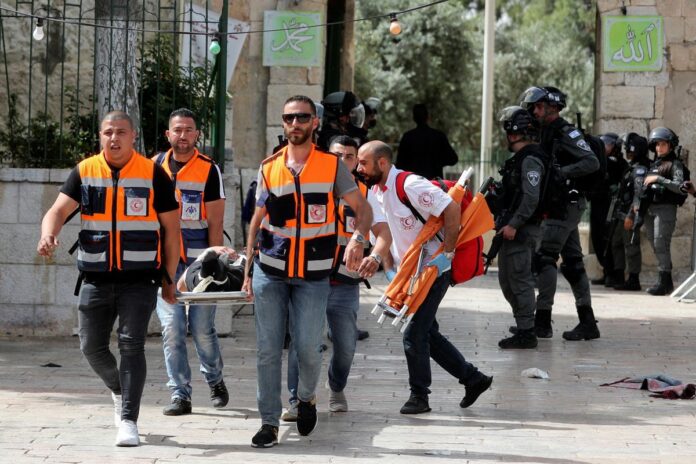 Worshippers gathered to pray on the holy night of Laylat-ul-Qadr were attacked in the compound of Al-Aqsa Mosque by Israeli forces on Friday night. Since then, the violence has escalated, involving rockets and airstrikes, leading to at least 26 Palestinians being killed, including nine children, and hundreds injured.

The OIC moot on Tuesday discussed the ongoing attacks against Islamic and Christian holy sites, particularly the blessed Al-Aqsa Mosque. The meeting of the OIC Permanent Representatives was convened upon the request of the State of Palestine.

The meeting fully endorsed the Palestine cause and urged the international community to take steps to save Palestinians from Israeli aggression.

During the meeting, Pakistan’s permanent representative at the UN also strongly condemned the Israeli aggression.

Meanwhile, Turkey and Saudi Arabia moved the recommendation to summon the session of UN General Assembly (UNGA), which was passed by the forum.

Prime Minister Imran Khan on Sunday strongly condemned the attack of Israeli forces during the holy month of Ramadan on Palestinians in Al-Aqsa Mosque. The prime minister, who is currently on a three-day visit to Saudi Arabia, took to Twitter to condemn the Israeli attack on Palestinians.

Prime Minister Imran’s Special Representative for Interfaith Harmony Maulana Tahir Ashrafi also said that Pakistan would observe Palestine Day on May 14 — on which either the first or second day of Eid will fall.

During a press conference, Ashrafi, who is also the chairman of the Pakistan Ulema Council, said that the prime minister has tasked Minister for Foreign Affairs Shah Mahmood Qureshi to liaison with other countries regarding the situation in Jerusalem.

He questioned the world’s silence on the matter, adding that during PM Imran’s visit to Saudi Arabia, the situation in Palestine came under discussion, besides the issue of Kashmir.

Pakistan has strongly condemned the violence against Palestinians that unfolded over the past weekend and continues.

The official spokesperson for Guterres, Stephane Dujarric said in a statement that Israeli authorities must exercise maximum restraint and respect the right to freedom of peaceful assembly.

“All leaders have a responsibility to act against extremists and to speak out against all acts of violence and incitement”, the statement continued. “The secretary general reiterates his commitment, including through the Middle East Quartet, to supporting Palestinians and Israelis to resolve the conflict on the basis of relevant United Nations resolutions, international law and bilateral agreements”.

The Envoys of the Middle East Quartet (from the European Union, Russia, the United States, and the United Nations), released a press statement, in which they expressed their alarm at “the provocative statements made by some political groups, as well as the launching of rockets and the resumption of incendiary balloons from Gaza towards Israel, and attacks on Palestinian farmland in the West Bank”.

The envoys called on the Israeli authorities to exercise restraint and to avoid measures that would further escalate the situation during this period of Muslim Holy Days. “We call on all sides to uphold and respect the status quo at the holy sites”, the statement continues. “All leaders have a responsibility to act against extremists and to speak out against all acts of violence and incitement”.

Meanwhile, the UN rights office, OHCHR, appealed on Tuesday for “a redoubling of efforts to restore calm” in the Occupied Palestinian Territory, after airstrikes and days of clashes between protesters and Israeli police.

The ongoing violence marks a dramatic escalation of tensions linked to the potential eviction of Palestinian families from East Jerusalem by Israeli settlers and access to one of the most sacred sites in the city, which is a key hub for Islam, Judaism and Christianity.

UN Secretary General Antonio Guterres expressed his deep concern at the situation in a statement at the weekend, while the UN Security Council held an emergency meeting on the issue on Monday.

In Geneva, UN rights office spokesperson Rupert Colville cited reports that more than 900 Palestinians had been injured between 7 and 10 May in East Jerusalem, and over 200 in the West Bank, “most by Israeli security forces”, some of whom had also been hurt.