Moving from geo-strategy to geo-economics 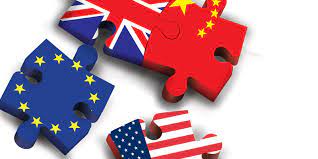 The Post Cold-War world witnessed certain changes in the international system. A major shift could be seen in the state policy objectives and the way they pursue them. This, consequently, has given rise to a new international order, characterized by state policies shifting from geo-politics to geo-economics, and a, of the security and economic realms. The underlying material transformation and economic restructuring is constantly threatening the status quo, and potentially creating the precondition for Asian countries, particularly China, to strongly assert themselves in the new world order.

World War II proved to be disastrous for European powers and demolished Britain’s long-established hegemony. So, the USA, with its overwhelming economic muscle, imposed herself in the international system, and established a highly institutionalized system that reflects its own normative preferences.  But, the current trends; domestic and international, manifest that US ascendancy has stretched to its breaking point. The Miracle of the East Asian states and the rise of India, Malaysia and Indonesia as emerging markets strengthened the global shift from West to East. Moreover, the rise of China as the fastest growing economy shows that Asia is on an irreversible path of prosperity, and rising as the hub of the global economy.

The shift is primarily driven by the policy orientation of the two leading world powers. China’s military advancement in the South China Sea and the Belt and Road Initiative manifest that it, simultaneously, uses two categories of policy instrument; the strategic military and strategic economic. On the other hand, the USA’s unnecessary interventions in Afghanistan and Iraq, and its meddling in the Middle East to seek regime changes of its choice shows that it still remains firm on the security paradigm to advance its geostrategic goals. Such policy practices on the part of the USA, and China’s emphasis on the geo-economic element of its foreign policy provides the latter with an opportunity to reassure those neighbours who are alarmed by its more assertive strategic policies. It also offers China the opportunity to create an alternative institutional forum for those Chinese policy makers who have long chafed at the US dominance in the IMF and the World Bank.

Unlike Washington, Beijing associates potentially less stringent demands of economic reforms with its new economic model. These make the Chinese Institutions, like the Asian Infrastructure Investment Bank (AIIB), very attractive to Asian and African leaders desperate for infrastructure and investment. Though AIIB reflects China’s norms, preferences and interests, these leaders are no more enamoured of the liberal political and economic reforms.

However, along with all the challenges to China ascendancy, the USA can do much less to stop a fundamental restructuring of global economic activity and its concomitant consequences, because Washington itself is a beneficiary of, and highly dependent on China economic development.

The centre of geo-economic rivalry between the two giant powers seems to be Asia and Africa, and it also defines the future of these continents.  In parts of Asia, the US military capabilities still dominate; promising security for the region. But, China’s growing military power and economic leverage are displacing the decades-old American preeminence. The regional countries are caught to choose between Chinese wealth and American security. Apparently, the transition of Asia is in China’s favour as the Asian economies, and therefore their domestic politics, rely more on Beijing than Washington. Meanwhile, the USA’s longtime allies like the Philippines and Indonesia are also moving closer to China.

US and Chinese involvement in Africa, a hub of natural resources, define their course of competition in the region. The geo-political codes of the African countries reflect the challenges of economic transformation for China and global hegemony maintenance for the USA. Beijing looks at Africa as a geo-economic space: to find a market for its manufactured goods and recycle its massive foreign exchange reserve into profitable investment in the region. The USA largely views the region as a site of humanitarian intervention, resource extraction and security. This manifests that the USA exploits regional vulnerabilities for its own gains while China is more intent on pursuing “win-win” diplomacy. This forces the African leaders to rethink their strategic orientation.

China’s sheer material importance in ،the global economy has already given it the potential to play a central role in the international system. But, many scholars are of the view that China’s ascendency to global hegemony is still in the formative stages. The US initiatives, like the Quadrilateral Security Dialogue (QUAD), provide a template for counteracting China specifically in the Indo-Pacific and the South China Sea.

Also, many developing countries look at China’s economic design as more ambitious than Chinese assertion of mutual benefits. The development of infrastructure projects across Asia, particularly in strategically vital ports and transit corridors, initially seemed like joint developments but eventually ended up in Chinese hands. Sri Lanka, in December 2017, was unable to pay debt on the port construction so it granted Hambantota port to China on a 99-year lease. This, and other examples from Africa, are mentioned frequently by the USA while tring to counter Chinese claims of disinterestedness.

However, along with all the challenges to China ascendancy, the USA can do much less to stop a fundamental restructuring of global economic activity and its concomitant consequences, because Washington itself is a beneficiary of, and highly dependent on China economic development. Again, it has kept its rivalry with China mainly economics while the rivalry it had with the USSR was primarily geo-strategic.

Facebook
Twitter
Linkedin
WhatsApp
Email
Previous articleSurvival of the fittest!
Next articleMassive inflow of LPG through port and Taftan border continues without any check

Amjad Ullah
The writer is a freelance columnist