Isn’t the constitution worth defending? 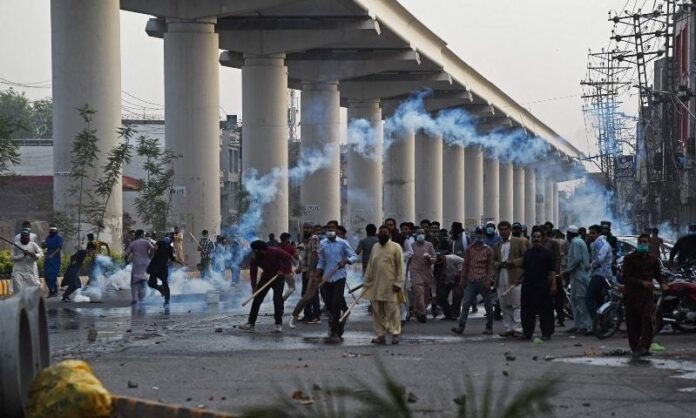 The government has declared the TLP a terrorist group and banned it.  Just as it has said that people are not supposed to leave their homes without masks, rightly so, only that injunction has resulted in nothing but most people ignoring the injunction as they ignore all injunctions, followed by the authorities ignoring the ignoring. Therefore so much for declaring groups ‘banned outfits’, ill thought out, kneejerk, look -good measures, like blocking roads during lockdowns, something that makes no sense. And that is just one example.

As a society we are not in the habit of tracking a problem to its deeper source. There are reasons why groups such as the TLP and others exist and have the massive support they enjoy. One of which is that anyone and everyone is free to teach whatever they wish to the country’s youth, many of whom have no education at all to counter that misinformation. Among the things they are taught is the blasphemous idea that killing and violence are justified to gain their mostly unjustified demands. In ignorant minds these demands become justifiable so long as they appear to encompass what they have been taught is religion.

Banning the TLP as a terrorist organisation should rightly constitute only one of the many accusations brought against leaders of such organisations, if the authorities have the guts.

Article 2 of the Pakistan Constitution states that Islam is the state religion of Pakistan. The exact words are: “the Injunctions of Islam as laid down in the Holy Quran and Sunnah shall be the supreme law and source of guidance for legislation to be administered through laws enacted by the Parliament and Provincial Assemblies, and for policy making by Government.”

Article 31 of the Constitution states that it is the country’s responsibility to foster the Islamic way of life. The exact words are: “Steps shall be taken to enable the Muslims of Pakistan, individually and collectively, to order their lives in accordance with the fundamental principles and basic concepts of Islam and to provide facilities whereby they may be enabled to understand the meaning of life according to the Holy Quran and Sunnah.”

Keeping the above in mind where does the TLP’s violence over the last few days fit in? Are their actions in accordance with Islam? Or do they foster the values of Islam?

It was TLP violence which left four persons and one policeman dead, a young man who yet had much to do in life . More than 300 police personnel were injured in the Punjab, many of them seriously when they were attacked by TLP supporters by ‘clubs, bricks and firearms.’

The TLP is an extreme rightwing party, that calls itself a religious party and invokes the name of Allah and the Prophet (PUH) to justify its existence and actions. For rational followers of Islam this is as much blasphemy as blasphemy can get. And yet after all its actions all the TLP gets is a ‘ban’ which, judging by precedent with reference to other rightwing parties, will be ignored. Has banning other rightwing parties made an iota of difference? Why to start with are they allowed to exist? Also, why this discrimination of such scanty charges?

Any group that claims to base its existence on the teachings of the Quran, and then acts in complete opposition to Quranic teachings thereby demeaning those teachings, the religion and its prominent figures and giving them a terrible image, is committing blasphemy. And we all know what the constitutional amendments in Pakistan’s least glorious era prescribe for that.

Instead of which some 505 Ahmedis, 229 Christians and 30 Hindus have been accused under various clauses of the blasphemy law from 1987 until 2018, as a result of accusations that rate from false to trivial.

Such contravention of the Constitution is common.

Article 31 of the constitution also says that “Steps shall be taken to ensure full participation of women in all spheres of national life.”

And yet in the news today we find that yesterday the police in Peshawar booked organisers and participants of the recent Aurat March in Islamabad on the charge of committing blasphemy. This was on the orders of a local court.

Aside from the curious fact that the case was booked in KP against a march taking place in Islamabad, it is also worth noting what participants of the Aurat March were protesting against.

In a society where women are routinely abused, taunted, raped, beaten, forced into marriage and rarely get their rights, the Aurat March places women’s experience of sexual and domestic abuse and violence on the table and asks for justice and change. It calls for better health and reproductive care for women, underage marriage and other such matters.

Last year male participants of a rival march named ‘Haya March’ made up of various religious parties threw stones at participants of the Aurat March in Islamabad. At least one person was injured then.

This year one of those who protested against the Aurat march was the Sunni Rabita Council, another ‘religious’ group.

So whither full participation of women in all spheres of national life?