Rise of the state

Entities purporting to use violence as an instrument must be eliminated 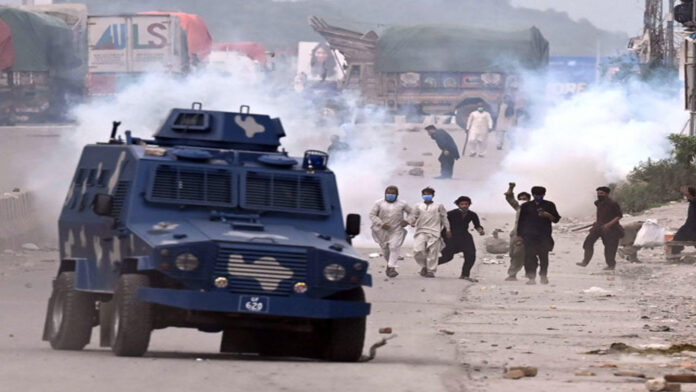 “The ultimate weakness of violence is that it is a descending spiral, begetting the very thing it seeks to destroy. Instead of diminishing evil, it multiplies it. Through violence you may murder the liar, but you cannot murder the lie, nor establish the truth. Through violence you may murder the hater, but you do not murder hate. In fact, violence merely increases hate. Darkness cannot drive out darkness, only light can do that. Hate cannot drive out hate, only love can do that.”

After a spate of violence unleashed by this extremism-stricken outfit, government’s decision to ban the Tehreek-e-Labbaik Pakistan (TLP) under the Anti-Terrorism Act 1997 was inevitable. Their resolve to approach the Supreme Court to seek a verdict for its dissolution is also understandable.

Tension had been brewing for quite some time. Since the TLP used Tahafuz-e-Namoos-e-Rasalat as the principal rationale for their protests, it was erroneously construed as much too challenging to be confronted head-on. Consequently, even when they blocked the twin cities of Islamabad and Rawalpindi on a few occasions in the past, a policy of appeasement was adopted. That may have served some immediate purpose, but brought no permanent relief. In fact it emboldened them further to become more daring in their subsequent ventures. But when they unleashed unprovoked violence throughout the country resulting in the death of four people, including two policemen, it was no longer possible for the government to remain silent. It had to move quickly to restore its writ. As a result, TLP stands proscribed and the petition before the Supreme Court praying for its dissolution is expected to be moved soon.

We have come long and we have come far. We can’t afford to plunge back into the cycle of violence. Pakistan’s ambition to transit from its traditional geo-strategic domain to the geoeconomic realm cannot be realised without addressing the component of militancy from its midst. It is here that entities like TLP raise their sinister heads which must be chopped off without compromise. Those spreading disquiet, even anarchy in the country, don’t deserve sympathy

Will these steps be enough to eliminate the monster of TLP and the contagious effects it may have left behind? Born as a reaction to the hanging of Mumtaz Qadri for the murder of a former governor of Punjab, Salman Taseer, who was accused of having committed blasphemy, the party has played with the raw sentiments of the people in the name of religion. Worse still, it has been allowed to do so.Its past ventures to block the capital for days, even weeks together, went unpunished. This resulted in the evolving of an aura of fear and most of the people, suffering from latent germs of violence and extremism, augmented further by lack of pragmatic thinking, became captive meat to be used to advance its myopic agenda.

A miniscule manifestation of that was on display throughout the country for three days running, including rampant acts of bludgeoning police personnel to death. I am sure if they had been left to themselves, they would have perpetrated further violence and moved in to block the cycle of life throughout the country.

Under the circumstances, and knowing full well the possible reaction by the miscreants, the steps that the government has taken are praiseworthy. The immediate need is to follow through with these actions and ensure that no space is left for these demons to exploit for advancing their violent agenda. But the matter cannot be addressed permanently only by taking some short-term measures.

Substantive changes will have to be made in the long run to accomplish that, including enactment of laws to stop the use of religion for political gains. Let’s not forget that the TLP, besides being a violent outfit, is also registered as a political party with the Election Commission of Pakistan (ECP). There are other similar parties whose politics is based on exploitation of religion as a vehicle. So the cardinal question that will be debated in the Supreme Court when the matter is taken there relates to the state’s bona fide authority to ban a political party. The government team, comprising legal and constitutional experts, will have to work hard to prove it in the court. There will be no room for faltering.

Much disservice has been done to this country. Pakistan’s unnecessary involvement in wars, which were none of our business, has been the fundamental flaw in the formulation of our foreign policy in the recent past. Consequently, these wars, dubbed as believers-fighting-infidels, resulted in importing militancy within the national frontiers. We suffered incessantly as a consequence of these policies and it was only on account of a long and heroic struggle by our armed forces, and after suffering astronomical human, material and financial losses, that we were able to bring relative peace back to the country. It cannot be endangered by allowing these demons of militancy to spread their wings again.

But it should not be forgotten that, because of a history of prolonged association, these demons continue to reside in our midst, particularly among the impoverished and marginalised segments of society. It is absolutely imperative to weed out these germs by taking all possible measures which may be considered necessary.

This would require some quick and tough decisions in terms of educating people and enhancing their awareness about how easily they can be held hostage in the name of religion. Thousands of seminaries throughout the country will have to be regulated, and the ones breeding militancy and violence either taken over by the state, or shut down. Alternate arrangements will have to be made to facilitate the students to continue their education.

Action that the government has taken against the TLP can be perceived by other entities with similar agendas as potential danger lurking over them. Camaraderie may germinate from this common fear which may lead to spread of further violence. If there is evidence that some of these seminaries or outfits are involved in provoking agitation, the state must act without any hesitation.

Simultaneously, it would be necessary to engage with others which are not involved in indoctrinating people in violence and militancy to soothe their fears. This should be without compromising the writ of the state. Their fears should be addressed not by exposing the state to their wicked machinations, but by ensuring that it is secured from any danger emanating from their actions. In fact, the potential of these entities to do so should be nullified through whatever measures are envisioned.

This action is not going to be without repercussions. The state should be fully prepared to thwart that. In the meanwhile, policies should be rehashed for long-term cleansing of the state from these violent outfits and the not-so-latent germs of extremism and militancy which have taken roots in the last few years. The monopoly of use of physical force rests with the state. Under no circumstances should that be compromised or diluted. Any entity purporting to use it to the detriment of the state should be confronted and eliminated without exception.

We have come long and we have come far. We can’t afford to plunge back into the cycle of violence. Pakistan’s ambition to transit from its traditional geo-strategic domain to the geoeconomic realm cannot be realised without addressing the component of militancy from its midst. It is here that entities like TLP raise their sinister heads which must be chopped off without compromise. Those spreading disquiet, even anarchy in the country, don’t deserve sympathy.

In doing so, we should also ensure that the cause of justice is not compromised. More particularly, the state should guarantee the protection of the weak and the underprivileged communities because, for them, securing justice is an uphill task which may come at much investment of money and time, both of which are scarce commodities for these people. The state must, therefore, look inwards to see that justice is dispensed quickly and equitably among all people and it does not remain an attendant of the rich and the privileged alone.  Here is a chance for the state to rise. Let us celebrate that.