Burden of the Umbrella

If you can’t take the heat, get out of the kitchen 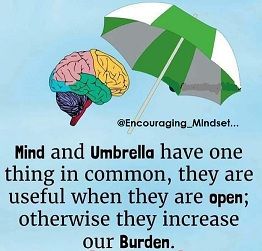 An umbrella signifies protection, and those who cannot carry its burden should not be in the arena. Most insurance companies in the w\West use the insignia of an umbrella to drive home the protective capacity of their policy. Though it does not rain that much in Lahore, yet an umbrella is a part of the kit in my car. Whenever we went to Murree for summer vacations, most people carried their umbrellas as rainy weather is always unpredictable there. Where rains are predictable, people do not leave home without it. In London it is part of the personal kit. On his recent visit to Pakistan (April 06, 2021) the Foreign  Minister of Russia Sergey Lavrov arrived at the Islamabad airport, and did not have to wait for the ‘Umbrella Bearer’ to escort him out of the aircraft. Pallbearers do carry the coffins for burial of the dead but the living seldom require this kind of support.

It is indeed interesting that in the First 100 Days Plan of PTI it was clearly written that ministers will use locally assembled cars not exceeding 1300cc. To counter this austerity measure, one of the electables commented, “Then what is the point in becoming a minister?” This condition was overruled on the basis that for security purposes large SUVs are required which is totally based on falsehood. Any car can be made bullet proof. In India they use their own Ambassador car which is then fortifiedd for protection. The government of Muhammad Khan Junejo rightly restricted staff cars to 1000cc. All larger automobiles were withdrawn and then auctioned. It has been recently reported that the Governor’s House in KP has ordered three BMW X5 armoured cars of 4395cc capacity each. Where is all this money coming from?

Another People’s Movement is needed to get rid of these ‘Political Bounty’ hunters who are afraid of getting wet, yet cannot even carry their own umbrella. This ‘Palki Leadership’ cannot lead in the 21st century, we have to get rid of them.

There is a colonial tradition of ‘mace bearers’ who lead the judges into court rooms. As a child growing up on the Mall close to the Lahore High Court, I was always amazed to see the judges wearing wigs and entering their courts behind ‘bearers’. After the promulgation of the 1973 Constitution, the wigs disappeared but I am not sure about the ‘bearers’. Bhutto moved out of the British Commonwealth and also banned the Freemasons Movement in the country, and their lodge was also taken over. Imran Khan had promised to shut down the Governor’s House which is down the road but it continues to survive. Recently the Governor was shown enjoying a boat ride in the lake with his friends. There was a botched attempt to tear down the outer wall which was against the law of ‘Heritage Buildings’ but there is no restriction to move the office of the Governor from this 700 kanals of prime real estate. After over seven decades of independence, colonialism continues to dominate over the masses.

The Foreign Minister of Pakistan, Makhdoom Shah Mahmood Qureshi, the Sajjada Nashin of Bahauddin Zikriya and Shah Rukn-e-Alam shrines located in Multan, waited for his Russian counterpart under an ‘Umbrella Bearer’ in royal style. While the visitor comfortably carried his own protection, the host sought external help. The photographs of the event were all over the place. If a Foreign Minister cannot protect himself from the rain what are his credentials? Is our Foreign Office in safe hands? While the Prime Minister travels on commercial flights, I have seen the Foreign Minister disembarking from the PAF plane occasionally used by the PM. Is the Foreign Minister entitled to the use of a private jet for his travel? Government officials posted to Islamabad usually maintain their residences in Lahore and frequently travel on the Motorway between the two cities. Regular weekend visits to Multan are not feasible by road, air travel is required for this purpose.

A few months back I happened to be at the Chief Minister Secretariat on Club Road. There was great hustle and bustle there, and on inquiry I was told that a meeting of Commissioners and Secretaries had been called by the CM. In an ‘Effective Meetings’ course that I attended and then taught, it was emphasized that Action Items with assigned responsibilities should be prepared and distributed for implementation otherwise it is an exercise in futility with blatant waste of resources. Looking at the performance of the bureaucracy in Punjab, I wonder what comes out of these expensive get-togethers. Work and service to the people is on no one’s agenda, and people in authority desire to be served with all kinds of bearers and butlers at state expense.

At the battle of Panipat in 1526, Zaheer-ud-din Babar led from the front. Against all odds, he commanded his troops in the battlefield and prevailed over Ibrahim Lodhi to seize control of Delhi. He established the Mughal Empire in India. When their rule was in decline, his heirs would come to the battlefield on palkis (Canopy covered Elephants) with their jewels instead of weapons. The colonialists massacred them and took control of the Indian Subcontinent which then became the Jewel in the Crown of the British Empire.

Leadership calls for sacrifice, not personal comfort. Leaders have to carry the load of heir nations. The masses have to feel protected not exposed under them. Unfortunately in the Islamic Republic of Pakistan the people have to carry the load of their leaders, and no one watches their interests. While they get wet holding umbrellas for their ministers, their future, security and wellbeing is compromised. Such a lopsided system is bound to perish.

After his victory in the 1970 elections, Bhutto proudly announced that politics had been cleansed of the influence of Mirs and Pirs, but his claim was short lived. Zia, who toppled him, introduced the concept of ‘positive results’. The party-less elections of 1985 created a new class of political rogues called ‘Electables’ that emerged from this approach. The Mirs and the Pirs also joined them.

Another People’s Movement is needed to get rid of these ‘Political Bounty’ hunters who are afraid of getting wet, yet cannot even carry their own umbrella. This ‘Palki Leadership’ cannot lead in the 21st century, we have to get rid of them.