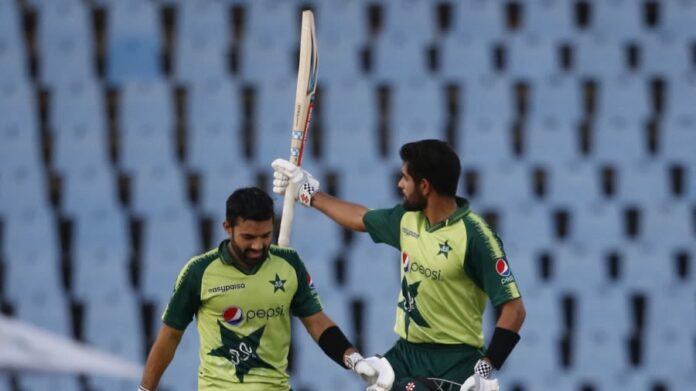 Before the game, Rameez Raja asked Pakistan captain Babar Azam why Fakhar Zaman wasn’t slated to open the batting for Pakistan. But in 18 record-breaking overs, Azam and Mohammad Rizwan provided the perfect answer, pummelling South Africa into submission as they chased down 204 at a canter in winning the third T20I in Centurion by nine wickets.
Azam got to his first T20I hundred off just 49 balls, two days after he took 50 balls to score as many runs, smashing 15 boundaries and four sixes along the way. It was a shame he would be dismissed seven runs shy of the target, but by then, Azam had romped to 122 off just 59 deliveries in one of the all-time great T20 innings. Rizwan, usually the aggressor among the pair, was the anchor by comparison, but by no means dawdled his way through, finishing with an unbeaten 47-ball 73.
Little South Africa did seemed to make a difference, though the hosts will feel they didn’t nearly hit the bowling heights of their performance from the second T20I. They didn’t find their lengths often enough, but in truth, even when they did, Rizwan and Azam were masterful at manipulating the field and finding runs where they seemingly weren’t to be had. The pressure told, especially on Beuran Hendricks, who was carted around for 55 in his four overs.
Even Tabraiz Shamsi, South Africa’s trump card in many ways, was oddly ineffectual, with Pakistan negotiating him adroitly without ever allowing him to stifle the scoring rate. Despite what had seemed a steep chase, when Pakistan finally did get there, it almost appeared as if South Africa were being put out of their misery.
It seemed ages ago, but the same destruction was playing out in the first innings, though in reverse. On that occasion, it was the pair of Janneman Malan and Aiden Markram, with the latter’s 31-ball 63 being his third successive T20I half-century. Markram bossed the show, with South Africa speeding along to 140 inside 13 overs. In a crucial passage of play, Pakistan began to reign them in during the final seven, a period during which the hosts managed just 63. It still meant they had inflicted upon Pakistan the first total in excess of 200 since 2013, but Azam and Rizwan ensured it was extremely scant consolation.
AZAM’S MASTERCLASS:
Earlier in the day, Azam had officially supplanted Virat Kohli as the No. 1-ranked ODI batsman. Later on, he would celebrate that milestone by reminding everyone that he had his eyes on that prize in T20Is too.
To many, the simple fact that the Pakistan captain had insisted upon opening once more by pulling rank over the returning Fakhar Zaman was an outrage in itself, and a throwback to a brand of T20 cricket Pakistan stubbornly continued to play with little success. That point was further emboldened by his struggles in the second T20I, perhaps his weakest T20 performance to date. He had managed just 50, taking as many balls to get there, and Pakistan registered 140 on a pitch every bit as good as today, before South Africa cruised to victory inside 14 overs.
But Azam was keen to show during a devastatingly effective hour of delightful T20 batting that it was only an exception. He was scoring with the strike rate of a power-hitter while seemingly taking as few risks as a middle-order batsman on day one of a Test match – the best of two worlds which has always seemed impossible to merge. One could sense the critics’ knives sharpening as Pakistan took just eight off the first two overs, but from the moment Azam carved George Linde for two boundaries in his third over, he found himself in a zone so intense that it was almost spooky. Every ball found the middle of the bat, every tiny gap in the field was geometrically exploited and every roll of the wrists was executed to perfection. South Africa were not so much blown away as surgically removed from a contest they felt they were well on top in.
The half-century came in 27 balls, but Azam would barely notice. Sisanda Magala went for six, and Lizaad Williams and Hendricks for further more sixes, as Azam simply hurtled along, indifferent even to the asking rate. His only ceiling appeared to be the limitations he was setting himself, and for the most part of a beguiling hour, there were none. Had he not nicked off to the wicketkeeper with seven runs to get, he might almost have been sorry to see the target achieved, so easy did he find T20 batting.
In truth, most days won’t be this easy. But for a batsman who can hit those heights, it becomes easy to understand why he felt he needed to face as many deliveries as possible.
SEVEN CRUCIAL OVERS:
There will be few games where bat dominates ball quite as comprehensively as this, but when sides find themselves in one of them, any passage of supremacy for the bowling side is likely to be magnified. And while Azam and Rizwan seemed to have enough confidence to chase down just about anything, they were given a vital helping hand by the way Pakistan finished the South Africa innings with the ball.
Until the end of the 13th over, South Africa sat pretty at 140 for 1, well set for a total over 220. But Pakistan managed to do something South Africa were never able to achieve; they halted the hosts in their tracks with a couple of quick wickets. Linde and Malan were removed within five balls of each other, and Heinrich Klaasen couldn’t quite find the fluency of the previous two games. The South Africa innings would peter out somewhat, with only 63 scored in the last seven. That doesn’t quite get noticed when the team total exceeds 200, but Azam and Rizwan were astute enough to pick up on it and exploit it.