Misinterpretation of Pakistan’s Stance on Kashmir

No normalization of ties until special status reinstated 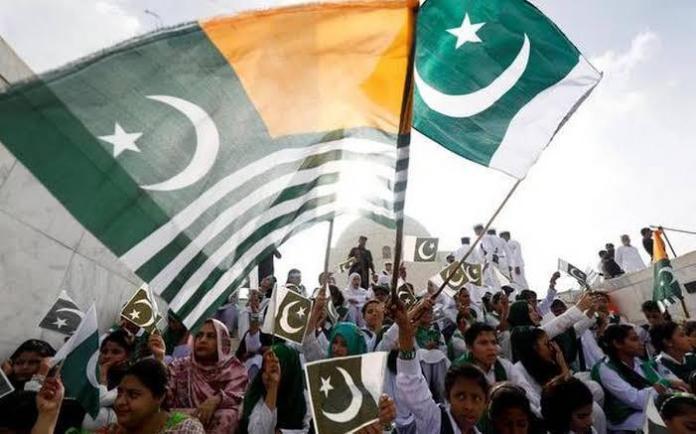 Controversial debate accelerated on electronic and print media when the federal cabinet recently deferred the proposal of Economic Coordination Committee (ECC) for import of cotton and sugar from India.

Foreign Minister Shah Mahmood Qureshi said that a cabinet meeting chaired by Prime Minister Imran Khan decided that the trade with India will remain suspended and normalisation of Pakistan-India ties was impossible unless India reverses its unilateral steps of August 5, 2019 in Indian Illegally Occupied Jammu and Kashmir (IIOJK), under which Kashmir was stripped of its statehood and special constitutional status.

Qureshi added that the lifting of the ban on trade had given the misguided impression of normalising all ties with India.

Federal Finance Minister Hammad Azhar had announced on March 31, this year that the government would allow the import of cotton and sugar from India.

Special Assistant to Prime Minister on National Security Moeed Yousaf stated that the ECC forwards its recommendations to the cabinet for approval, in every decision and the cabinet is the final decision-making forum.

However, without taking cognizance of reality, various leaders of the Pakistan’s opposition parties denounced lifting of ban on the import of cotton and sugar from India, saying that Islamabad has moved to normalise relations with New Delhi without resolving the Kashmir issue. Although endless rift has been created in the Pakistan Democratic Movement (PDM)-an anti-government alliance, after serious differences emerged between the PML-N and the PPP parties on a number of matters, yet they continued criticising the PTI government. Some of them misconceived that it was in knowledge of the PM Imran Khan, some called it a U-turn of the government, while some allegedly stated that the present regime has bargained the Kashmir dispute in exchange of trade with India.

In their misconceptions, these entities forgot that present regime has raised the issue of the IIOJK, Indian military lockdown and state terrorism there and abrogation of the special status of the Kashmir on various international forums, including OIC and the UNO, while stressing on the settlement of the Kashmir dispute in accordance with the UNO-related resolutions.

In this regard, Indian Prime Minister Narendra Modi sent a letter to his Pakistani counterpart on March 23 to congratulate him on the Pakistan Day, saying India desires of cordial relations with Pakistan. But an atmosphere of trust, devoid of terror and hostility, is “imperative” for it.

Media reports suggest that in response, PM Imran Khan wrote a letter to Modi, saying that creation of an “enabling environment” is imperative for a constructive and result-oriented dialogue to resolve all outstanding issues between Pakistan and India, in particular the Jammu and Kashmir issue.

Pakistan’s foreign office did not confirm that Khan wrote any such a letter to Modi.

While, following stereotypes, these internal and external entities of the country misinterpreted Modi’s letter and some other moves—statements of civil and military leadership.

In this connection, addressing the two-day conference-Islamabad Security Dialogue, PM Imran Khan stated that good relations with states and regional neighbours were also paramount for national security and called upon India to give the people of occupied Kashmir their right to self-determination in line with the United Nations Security Council Resolutions. Recounting August 5, 2019 when India revoked the special status of the Indian Occupied Kashmir, he explained that for an enabling environment for meaningful dialogue, “India must take the first step forward”.

Next day, in his speech on the occasion, Chief of Army Staff General Qamar Javed Bajwa said that it was time for India and Pakistan to “bury the past and move forward…lasting peace in the sub-continent will remain elusive until the resolution of the Kashmir issue”.

In fact, both the statements of PM Khan and army chief Gen. Bajwa were misapprehended by the internal entities, who did not read their statements with reference to the context.

In the recent past, the Director Generals of Military Operations of Pakistan and India had agreed to strictly observe the 2003 ceasefire agreement at the Line of Control (LoC) and other sectors, including Working Boundary from the midnight of February 24 and 25, this year.

In this backdrop, leaders of the opposition parties, including media analysts presumed that Islamabad and New Delhi are in contact through back channel diplomacy to start dialogue, while PTI government has ignored its stance on Kashmir.

In their misconceptions, these entities forgot that present regime has raised the issue of the IIOJK, Indian military lockdown and state terrorism there and abrogation of the special status of the Kashmir on various international forums, including OIC and the UNO, while stressing on the settlement of the Kashmir dispute in accordance with the UNO-related resolutions.

In response, besides human rights groups, in the recent past, the UN Security Council in its meetings has thrice reiterated that the Kashmir issue requires to be settled according to the related Security Council resolutions.

The European Parliament has repeatedly indicated that the people of Indian Occupied Jammu and Kashmir had been subject to intolerable suppression of their freedom and fundamental rights.

In a latest statement, UN Secretary-General Antonio Guterres who urged the resolution of Kashmir dispute in accordance with the UN resolutions, warned that “any military confrontation between two nuclear powers-Pakistan and India would be a disaster for both countries and the whole world. He added: “his good offices are always available for mediation.”

And on the special instructions of the Premier Khan, 5th of August, 2020 was especially observed as the Black Day by the Kashmiris on both side of LoC and worldwide, as on this very day, Indian Parliament revoked articles 35A and 370 of the Constitution, which gave a special status to the IIOJK. The act split the IIOJK into two territories to be ruled directly by New Delhi. Similarly, the 5th of February, 2020 and 2021 were also commemorated as the black days to pay homage to Kahsmiri martyrs and to show solidarity with the freedom fighters who are demanding their legitimate right of self-determination, as recognized by the UN resolutions.

But, it is regrettable that by misinterpreting Pakistan’s stance on Kashmir, country’s some politicians and media analysts have even misguided the Kashmiris and some leaders of Kashmir who have shown skepticism about the solution of Kashmir dispute, while criticising the PTI government.