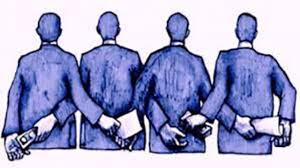 In the formative years of Pakistan, corruption was contained while competence prevailed, but not any longer. Those who are competent are invariably corrupt, while those who are honest are mostly ineffective. The golden rule being followed is, ‘No gain no pain’. Nothing moves in the land of the pure unless assisted by the lustre of currency. Letters or complaints are not even acknowledged by the highest offices of the land.

Officers carry impressive titles like, ‘Public Co-ordination’, Secretary Co-ordination, Principal Secretary, Principal Staff Officer, Chief of Staff, Chairman Inspection Team, etc, but despite the pomp and show nothing gets done despite written reminders, diary numbers proof of mailing indicating receipt of the communication. The latest trend is not to accept written complaints to delay or even deny relief, which then have to be mailed making it more difficult. Record keeping is very poor with most public records in shambles. Thank God, the ritual of weekly inferno of public records has stopped with the change of government.

Despite hectic efforts by the present government of the PTI, the ground realities remain grim mainly because of incompetence in containing corruption. In the last 40 years, a pay-for-service mechanism has been operating which has now come under threat. Honest officers are unwilling to go against the tide by correcting the mistakes of the past, thereby denying the much deserved relief to the public. The standard reply being; “We cannot go against the department.” which means no relief.

The public is then encouraged to seek legal remedy, which is both expensive and never ending. More than half of the civil litigation emanates from executive malfunction which is easily correctable in its own area. I can provide a list of cases which can be easily resolved in the executive domain, provided there is a will to do so.

Though no one desires to go back to the old corrupt ways the public remains confused about the way forward. Let NAB handle corruption, while the people’s representatives focus on building relief delivery mechanisms by improving the prevalent competence at all levels by enforcing strict merit. While competence is manageable, corruption has to be contained.

It is because of this lack of performance that the executive domain is repeatedly breached by other institutions. Confusion also prevails over the role of the Chief Executives, who have been downgraded to receiving and forwarding desks or clerks, with no clear directions. Under the 1973 Constitution the Prime Minister is the Chief Executive Officer of the country. All appointments above Grade 20, including the Chief of Army Staff, are directly made by him. In the provinces the Chief Minister exercises similar powers. After the 18th constitutional amendment the CMs have been totally let loose of the federation. The CM Sindh, Murad Ali Shah, has recently claimed that he is not answerable to the PM despite the fact that Pakistan is a federation, not a confederation. The big question is whether they are delivering despite all the constitutional autonomy and authority.

Building competence levels is much easier than combating corruption. The mafias are well entrenched and are able to dodge reforms. Focus should be on building competence through training and formulation of SOPs (Standard Operating Procedures) for most government procedures to take away discretion which encourages corrupt practices and misuse of authority.

Nepotism also kicks in. Use of technology helps, but a systems approach is needed to link all the pieces to function in tandem. There are major voids between policy and implementation which can only be overcome through well-defined SOPs. Several reform initiatives were launched during the Musharraf regime which did not have the expected impact. The devolution programme was launched through the NRB (National Reconstruction Bureau), development came under NCHD (National Commission for Human Development) while NAB (National Accountability Bureau) was assigned the task of fighting corruption. Billions were poured in but the returns were marginal mainly because of poor implementation.

The elected representatives of the people who are a part of the legislative branch also suffer from the dual menace of incompetence and corruption. While most time is spent in exposing corrupt practices of the past rulers, there is very little focus on providing relief to the public. Grievances keep mounting while the debates go on unabated. The Health Card Initiative is good and should be expanded as it cuts across the prevalent corruption in this vital human sector.

Education also needs this kind of focus as the department is infested with all kinds of unholy practices, including ghost teachers and abandoned schools. A unified curriculum will be launched this March, which should be closely monitored for any hiccups or required adjustments, like all new initiatives. At least the constitutional requirement of Article 25A must be met with universal primary coverage by the next school year starting in August 2021. Combined with unified curriculum these programmes can have major impact on human development by eliminating the menace of illiteracy. Like health, education also needs focus.

Despite tall claims NAB has not been able to net the big fish of corruption. Maryam Safdar has been asked to appear before the Lahore office. Let us wait to see what plan of resistance will be deployed this time around. While Shahbaz Sharif remains imprisoned, his son Hamza has been bailed out by the court. Nawaz is in London still trying to get his lost platelets back, no one seems to know their current levels. Zardari is on bail in Karachi, desperately trying to topple the elected government of Imran Khan.

Though no one desires to go back to the old corrupt ways the public remains confused about the way forward. Let NAB handle corruption, while the people’s representatives focus on building relief delivery mechanisms by improving the prevalent competence at all levels by enforcing strict merit. While competence is manageable, corruption has to be contained.