The protest is going on from the last two days 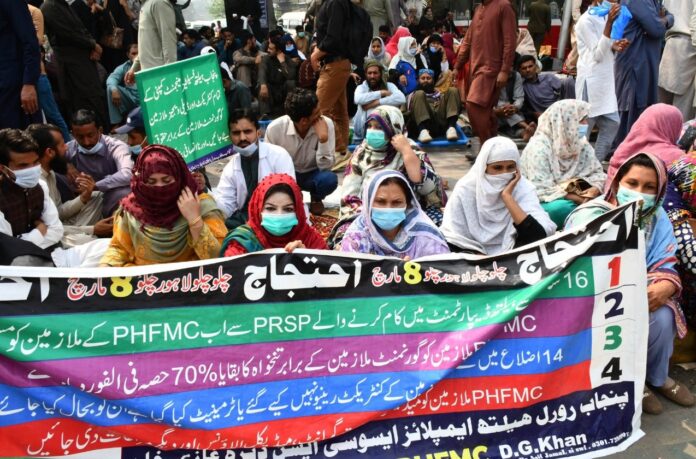 LAHORE: The Punjab Rural Health Employees Association (PRHEA) has continued its protest outside the Punjab Assembly due to lack of service structure and regularisation of jobs, Pakistan Today learnt on Tuesday.

The protest at the Mall Road is going on from the last two days and as result of which, the traffic on the main roads of Lahore was also severely affected and the traffic pressure could not be reduced due to incompetence and poor planning of the traffic police.

Speaking to Pakistan Today, a protester named Mohammad Saddiq informed that all of them are employees of the Punjab Health Facilities Management Company (PHFMC) administrated by the Punjab Health Department and they were protesting against the non-fulfilment of the promises made by the government. “We have no interest in protesting. We are on the roads for our legitimate demands. The Punjab Rural Support Programme (PRSP) was launched when Pervez Elahi was the chief minister of the province. Later, when Shehbaz Sharif became the chief minister, he divided the health sector into different sections and established the PHFMC. We, the former employees of the health department, were also subordinated to this company. We had also staged a sit-in four or five years ago in which we were assured that various reforms would be brought in this company and we would be regularised by improving our service structure, but now we know that we have no future,” he said.

“The management of the company forcibly gets resignations from us whenever it wants. We do all the work related to health. We do a door-to-door polio campaign, but when it comes to demands, we are given a false promise. Midwives are better than us as they have been regularised while we are being humiliated despite being educated and having diplomas.”

Another protestor Samiullah informed that they have been working in the health department for 16 years but the government never thought of regularising them.

“We have been working on a contract since 2004 and we have not been regularised yet. Our supporters include male and female employees from 14 districts. In the rest of the government departments, employees have been regularised after working for three years. Our salaries are very low and there is no service structure. Hospital sweepers are paid more than us. Our people are also exploited by the PHFMC. Most of our people have been terminated and are not being reinstated. We have held sit-ins at the same place many times before but we are given a false promise of notification and practically nothing happens. We have prepared for fifteen days and we will not leave until our demands are met. Our leaders are in talks with the provincial law minister and other members of the government, but so far there has been no success,” he said.

On the other hand, some shopkeepers at the Mall Road said that after the sit-in of federal government employees in Islamabad and the increase in their salaries, the government employees of Punjab also come here every day to hold sit-ins so that their demands could be fulfilled. “We have no interest in the protests, but our complaint is that due to these protests, the entry of traffic is blocked on this road, which also affects our business. The traffic police should make good plans to deal with such a situation so that the people could not get in trouble,” they suggested.