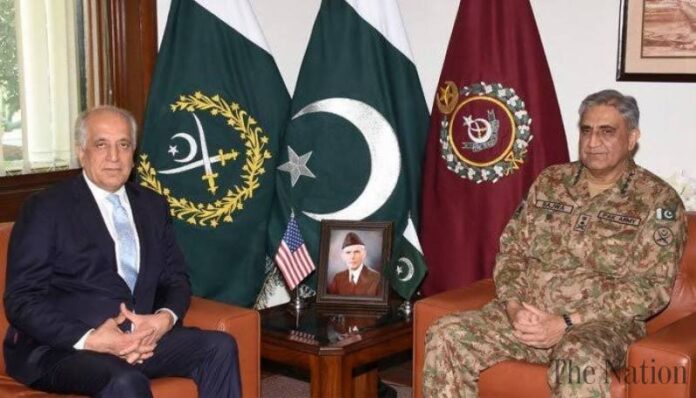 According to the Inter-Services Public Relations (ISPR), the US delegation greatly appreciated Pakistan’s role in the Afghan peace process. The military’s media wing said that matters of mutual interest, regional security and ongoing Afghan reconciliation process were discussed in the meeting.

Khalilzad’s visit, first under the Biden administration, came against the backdrop of desperate attempts by the US to seek a political end to the war in Afghanistan. Khalilzad flew from Doha where he held talks with the Afghan Taliban.

Earlier, he was in Kabul where he shared the roadmap developed by the Biden administration to advance the peace process.

Similarly, US Secretary of State Anthony Blinkin wrote a letter to Afghan President Ashraf Ghani, outlining a four-point plan for the Afghan endgame. The plan includes a UN sponsored meeting of foreign ministers of Pakistan, Iran, Russia, US, China and India to adopt a ‘unified approach” on Afghanistan.

The Afghan government was given specific proposals envisaging a new inclusive government leading to comprehensive ceasefire.

In Rawalpindi, Khalilzad, as per reports, briefed the Pakistani side about the new proposals. The statement issued by the military’s media wing, however, provided little insight into the meeting.

The reports, meanwhile, stated that Ambassador Khalilzad sought Pakistan’s help in advancing the peace process under the new strategy developed by the Biden administration. The new US plan is aimed at breaking the deadlock in the slow moving peace negotiations with a roadmap for a future Afghan government with Taliban representation, a revised Afghan constitution using the current one as an “initial template” and terms for a permanent and comprehensive ceasefire.

The New York Times, which obtained the copy of the proposals, reported that the Biden administration called for national elections after the establishment of a “transitional peace government of Afghanistan”. The Taliban reportedly rejected the idea of fresh elections, calling them as western interference.

Khalilzad is believed to have requested Pakistan to use its leverage over the Taliban to get the process move forward.

The new US government after taking charge decided to review the Doha deal the Trump administration had signed with the Taliban in February 2020. The deal provides a road map for the US troops’ withdrawal in return for the Taliban not allowing Afghan soil to be used again by the terrorists as well as entering into the intra-Afghan talks.

Under the agreement, all US and other international forces are to leave Afghanistan by May 1. The Biden administration and the NATO countries, which also have troops presence in Afghanistan, indicated that they might not stick to the plan.

The Taliban have been accused of violating the terms of agreement and the US and NATO insisted that troops drawdown is conditioned based.

But the letter written by the US secretary of state suggested that the Biden administration has not ruled out the possibility of leaving Afghanistan by May 1.