Maryam claims govt's days are numbered: Bilawal says Imran should take lessons from Gilani on how to respect party members 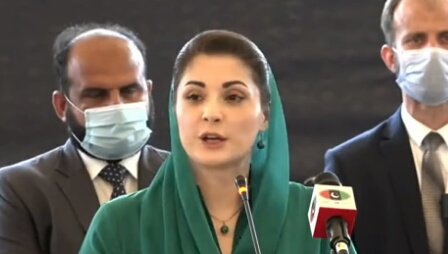 ISLAMABAD: The opposition parties on Saturday rejected the parliamentary vote of confidence, which Prime Minister Imran Khan won with a comfortable majority, securing the trust of 178 MPs from members of his Pakistan Tehreek-e-Insaf (PTI) and allies in the 342-seat National Assembly.

He said the Constitution said the president can summon a session only “if he believes that the prime minister does not enjoy a majority” in the House.

Terming the session “unconstitutional”, Fazl, who is not part of the House, said the opposition was aware of how MPs were “forced” to vote in favour of the prime minister.

“The assembly session was called over a summary forwarded by the fake prime minister. A summary is not involved in summoning such sessions, all of this is a drama.

We don’t accept today’s Assembly session, nor do we accept the confidence vote.”

“This was not a confidence vote. We know which agencies watched the MPs the entire night [before the vote]. [We know] who knocked on the doors of each member to ensure they were present [during the session],” Fazl claimed.

‘INSTITUTION’S BACKING’ OUT IN OPEN:

In a thinly-veiled reference to the army, Pakistan Muslim League-Nawaz (PML-N) Vice President Maryam Nawaz claimed those who had “saved” Imran in the vote of confidence had openly come out in front of the public.

She said that for her, the decision was taken on March 3 when Yousaf Raza Gillani, a joint candidate of the PDM, defeated PTI’s Abdul Hafeez Sheikh for a seat in the Senate.

The votes, she claimed, the government received today have no standing since the MPs were forced to vote for the premier.

The prime minister keeps renewing his criticism of the 16 MPs who voted for Gillani but took a vote of confidence from the same parliamentarians.

Maryam also drew similarities between the PTI campaign and the January 6 attack on the US Capitol.

She regretted the PTI activists resorted to violence against PML-N leaders during a press conference earlier in the day.

Maryam said she was sad about the way PML-N Spokesperson Marriyum Aurangzeb was “attacked”, on which, she said, the whole nation was saying “shame shame”.

“[After] this shoe you threw at Ahsan Iqbal and the worst manners you demonstrated, I want to say that your days are counted,” she told the PTI.

She said although the PML-N believed in morals and decent politics, it will not forget the behaviour of the PTI.

“The PMLN is not a charity party, if it battled goons and thieves with ethics before then it was good, but the confrontation with hooliganism is never done with ethics and morals, so remember the PML-N won’t forget this,” she said.

Referring to Imran as a ‘grumpy old man’, Bilawal said that even the National Assembly has rejected Imran and the puppet government. “As the leader of the house it was his [Imran’s] duty to condemn what happened outside the Parliament but he did not,” he said, adding that despite all the hue and cry Yousaf Raza Gilani is now a member of the Senate.

He further said that instead of pointing fingers at Gilani, Imran should take lessons from him on how to respect his party members. “If we unite under PDM it will not be an individual victory but victory for the nation,” he added.