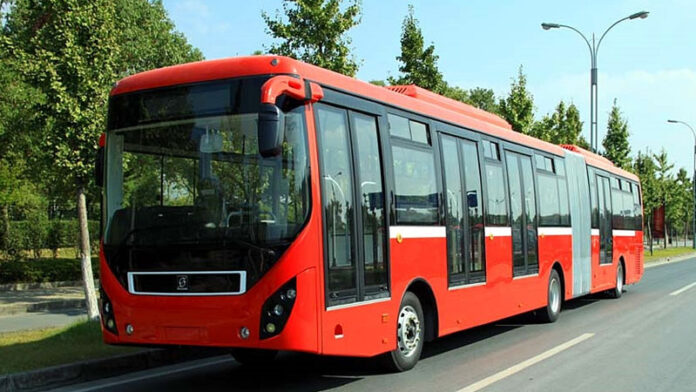 ISLAMABAD: The federal cabinet has directed the interior and communication ministries to devise a plan to operationalise Islamabad Metro bus service on priority basis, Pakistan Today learnt on Friday.

According to sources, the federal cabinet directed the ministries to devise a plan to operationalise the Metro bus service from Peshawar Morr to New International Islamabad Airport (NIIA) to provide smooth bus ride to passengers, travelling within the capital.

Sources said that the infrastructure work and installations of electro mechanical components of the project were completed one year ago but the project could not be handed over to the Capital Development Authority (CDA) as certain formalities were not fulfilled. They said that currently one of the major problems is the lack of buses and the CDA has proposed to use the surplus buses of Rawalpindi-Islamabad bus service for the use of Islamabad Metro bus project.

The CDA will assume the possession of the project after the required formalities, including the availability of buses, are fulfilled, they added.

Prime Minister Imran Khan has taken serious notice of the delay in the operationalisation of the project and directed to take measures to start the service to provide smooth bus ride to passengers, sources informed, adding, “The project can be operationalised with the provision of only ten buses while 20 additional buses are available in the depot of Rawalpindi-Islamabad Metro project.”

As per sources, the CDA has already proposed to use the surplus busses of Rawalpindi-Islamabad Metro for the bus service in the capital without spending any amount on the procurement of those buses as a bus terminal of Rawalpindi-Islamabad Metro was earlier constructed on a CDA land worth billions of rupees in H-9 sector and the Punjab government had not paid any money for the land to the CDA.

However, the interior minister has assured the PM that the issue will be resolved soon.

Earlier, the National Highway Authority (NHA) chairman, while briefing the federal cabinet on February 09, informed that the NHA was assigned the responsibility for construction of civil infrastructure works and electro mechanical components of the project and the NHA had completed the tasks. However, required electronic equipment would be installed after the CDA takes over the project.

According to documents, the length of Islamabad Metro is 26.5kms and it has eight bus stations. The project was approved in January, 2017 to link the NIIA to the capital and it was to be completed in August, 2017 but the deadline was later extended to December, 2018. The project, includes the construction of a dedicated two-lane signal-free corridor. A three-lane carriageway with shoulders on either side of the Metro corridor from the Golra Morr Interchange to the Grand Trunk Road Interchange is also a part of the project to ensure free flow of traffic.

ABBOTTABAD: A man brutally slaughtered a woman and her two children in Abbottabad on Sunday, over an unknown reason. As per police, the dreadful incident...
Read more
ISLAMABAD

ISLAMABAD: The Gender Protection Unit of Islamabad Police have arrested a person on the complaint of his wife. Police officials told this scribe that Islamabad...
Read more
ISLAMABAD

ISLAMABAD: Islamabad on Sunday recorded the lowest Covid-19 positivity rate over the past 24 hours in the current third wave of the pandemic. According to...
Read more
- Advertisment -