On day one, Biden targets Trump policies on climate, coronavirus

The 15 executive actions, and two directives, amount to an attempt to rewind the last four years of federal policies with striking speed. 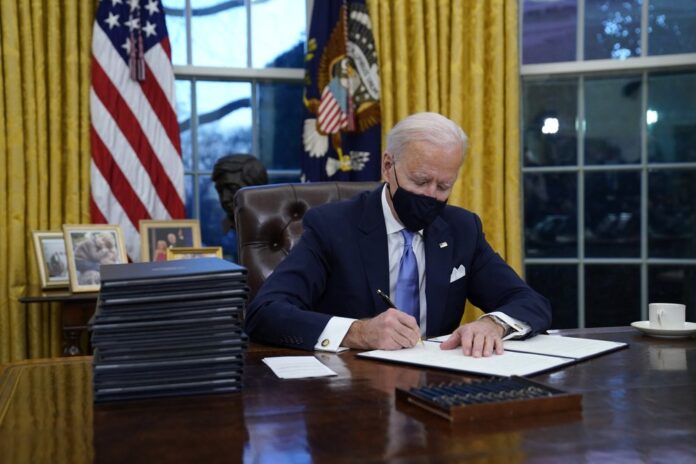 WASHINGTON: President Joe Biden is moving swiftly to dismantle Donald Trump’s legacy on his first day in office, signing a series of executive actions that reverse course on immigration, climate change, racial equity and the handling of the coronavirus pandemic.

The new president signed the orders just hours after taking the oath of office at the Capitol, pivoting quickly from his pared-down inauguration ceremony to enacting his agenda. With the stroke of a pen, Biden ordered a halt to the construction of Trump’s US-Mexico border wall, ended the ban on travel from some Muslim-majority countries, declared his intent to rejoin the Paris Climate Accord and the World Health Organization and revoked the approval of the Keystone XL oil pipeline, aides said.

The 15 executive actions, and two directives, amount to an attempt to rewind the last four years of federal policies with striking speed. Only two recent presidents signed executive actions on their first day in office — and each signed just one. But Biden, facing the debilitating coronavirus pandemic, a damaged economy and a riven electorate, is intent on demonstrating a sense of urgency and competence that he argues has been missing under his Republican predecessor.

“There’s no time to start like today,” Biden said in his first comments to reporters as president.

Biden wore a mask as he signed the orders in the Oval Office — a marked departure from Trump, who rarely wore a face covering in public and never during events in the Oval Office. But virus precautions are now required in the building. Among the executive actions signed Wednesday was one requiring masks and physical distancing on federal property and by federal employees. Biden’s order also extended the federal eviction freeze to aid those struggling from the pandemic economic fallout, created a new federal office to coordinate a national response to the virus and restored the White House’s National Security Council directorate for global health security and defense, an office his predecessor had closed.

The actions reflected the new president’s top policy priority — getting a handle on a debilitating pandemic. In his inaugural address, Biden paused for what he called his first act as president — a moment of a silent prayer for the victims of the nation’s worst public health crisis in more than a century.

He declared that he would “press forward with speed and urgency” in the coming weeks. “For we have much to do in this winter of peril and significant possibilities — much to repair, much to restore, much to heal, much to build and much to gain,” he said in the speech.

But Biden’s blitz of executive actions went beyond the pandemic. He targeted Trump’s environmental record, calling for a review of all regulations and executive actions that are deemed damaging to the environment or public health, aides said Tuesday as they previewed the moves.

Another order instructs federal agencies to prioritise racial equity and review policies that reinforce systemic racism. Biden revoked two Trump orders related to the 2020 census. The first attempted to discern the citizenship status of every US resident, and the second sought to exclude people in the US illegally from the numbers used for apportioning congressional seats among the states.”

He also ordered federal employees to take an ethics pledge that commits them to upholding the independence of the Justice Department.

Those moves and others will be followed by dozens more in the next 10 days, the president’s aides said, as Biden looks to redirect the country without having to go through a Senate that Democrats control by the narrowest margin and will soon turn to the impeachment trial of Trump, who is charged by the House with inciting the insurrection at the Capitol.

Republicans signaled that Biden will face fierce opposition on some parts of his agenda.

One of his orders seeks to fortify the Deferred Action for Childhood Arrivals, known as DACA, a signature effort of the Obama administration that provided hundreds of thousands of young immigrants protection from deportation and a pathway to citizenship. That’s part of a broader immigration plan Biden sent to Congress on Wednesday that would provide an eight-year path to citizenship for an estimated 11 million people living in the US without legal status.

The plan would lead to “a permanent cycle of illegal immigration and amnesty that would hurt hard-working Americans and the millions of legal immigrants working their way through the legal immigration process,” said Chris Hartline, a spokesman for the National Republican Senatorial Committee.

Even that familiar criticism seemed a return to the normalcy Biden has promised after years of disruptive and overheated politics. Hewing to tradition, Biden started his day by attending church with both Democratic and Republican leaders of Congress. His press secretary, Jen Psaki, held a briefing for reporters, a practice the Trump White House had all but abandoned in the final two months of the presidency. Psaki said she intended to restore regular briefings as part of the White House’s commitment to transparency.

“I have deep respect for the role of a free and independent press in our democracy and for the role all of you play,” she said.

Biden took other steps to try to signal his priorities and set the tone in his White House. As he swore in dozens of political appointees in a virtual ceremony, he declared he expected “honesty and decency” from all that worked for his administration and would fire anyone who shows disrespect to others “on the spot.”

“Everyone is entitled to human decency and dignity,” Biden said. “That’s been missing in a big way for the last four years.”