The mother of all evils? 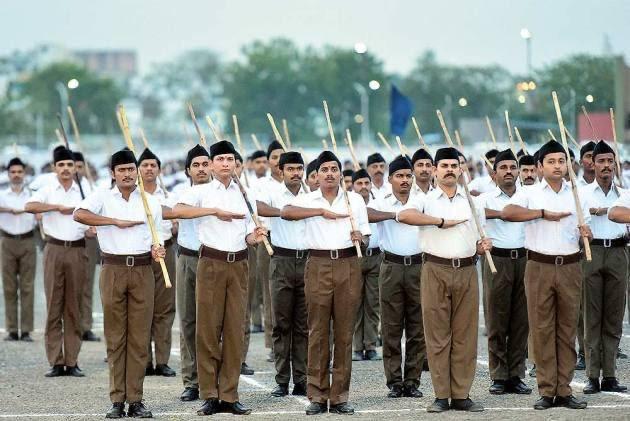 Pakistan has urged the United Nations Security Council to designate India’s Rashtriya Swayamsevak Sangh (RSS), the parent organization of the ruling Bharatiya Janata Party (BJP), as a terror group. The Pakistani representative demanded that the RSS should also be included within the ambit of the 1267 Sanctions Committee.

It is unfortunate that declaring an individual or entity a terrorist has become a political ploy. The freedom fighters of yesteryear, like the Taliban could become terrorists today. Cuban and Latin American terrorists were displayed as freedom fighters in the US gallery of portraits.

Shashi Tharoor, the Congress nominee for UN secretary-general, said, “We are living in a country where on the one hand the Prime Minister says the Constitution is his holy book and on the other hand, he extols as a hero and instructs his Ministers to study the works, writings, and teachings of Deen Dayal Upadhyaya, who explicitly rejects the Constitution.”

The White House welcomed Jalaluddin Haqqani (founder of the Haqqani Network) as a guest.

India has a convenient way to exercise its diplomatic clout to get declared any entity ‘terrorist’ through linking it with ‘freedom movement’ (euphemistically called ‘terrorism’ by India) in the occupied Kashmir.

Congress leader Digvijaya Singh, former Madhya Pradesh chief minister, has alleged that “All arrested ‘Hindu terrorists’ have had RSS link.” He claimed, “All Hindu terrorists who have ever been caught have association with RSS in some way or the other. Nathuram Godse, who assassinated Mahatma Gandhi, was also part of RSS; bomb blasts were executed by people influenced by Sangh ideology. So, this ideology is spreading hatred, hatred breeds violence, and from violence is bred terrorism.”

He said, “Bomb blasts were executed by people influenced by Sangh ideology, be it Malegaon blast, Mecca Masjid blast, blast in Samjhauta express or Dargah Sharif.”

Speaking at the Houston City Council against the city’s participation in the “Howdy Modi” rally, Pieter Friedrich expounded the RSS’s nexus with worldwide terrorism’.

In Norway, terrorist Anders Breivik left a manifesto that describes how he was inspired by other extremist and nationalist groups around the globe. Breivik pointed to the RSS in India. He praised the RSS for how “they dominate the streets… and often riot and attack Muslims.” He said the goals of white supremacists and the RSS are “identical.”

The RSS is a fascist paramilitary founded in 1925 — the year Hitler published Mein Kampf. The RSS developed with inspiration from the Nazis. And produced Narendra Modi. In 2002, Modi presided over Gujerat as RSS soldiers massacred 2000 Muslims, with leaders of the pogrom later confessin on camera that Modi sanctioned their violence.

Thus Modi was banned from entering the USA for over 10 years. Today, under Modi, Christians, Dalits, Muslims, Sikhs, and every Hindu disagreeing with the RSS lives in fear of their lives.

Modi’s hands are stained with blood.

Narendra Modi, the current Prime Minister, like so many other BJ stalwarts, makes no bones about having been a member of the RSS. It has ubiquitous influence in all states and union territories. Without its consent, no-one can get a party ticket or contest elections.

The RSS is a conglomerate of disguised terrorists. Indian media dare not focus its violent activities, but it is sometimes exposed by viral images of violence by its workers. Images show RSS members participating in Delhi riots, lynching suspected beef eaters, or Muslim prayer goers. RSS militants have been identified chanting religious slogans. It was the RSS that had spearheaded the 192 demolition of the Babri mosque.

In a work expressing admiration for Nazi Germany’s purge of Jews, Golwalkar wrote in 1939, “… the foreign races in Hindusthan must either adopt the Hindu culture and language, must learn to respect and hold in reverence Hindu religion, must entertain no idea but those of the glorification of the Hindu race and culture, i.e., of the Hindu nation and must lose their separate existence to merge in the Hindu race, or may stay in the country, wholly subordinated to the Hindu Nation, claiming  nothing, deserving no privileges, far less any preferential treatment not even citizen’s rights.”.

Golwalkar made it clear that in the RSS view, Hindu majoritarian identity politics is the only acceptable nationalism, and any asserting an identity separate from the Hindu identity is ‘anti-national’ and ‘divisive.’ He wrote: “Let us remember that this oneness is ingrained in our blood from our very birth because we are all born as Hindus.”

Golwalkar referred to Christians and Muslims as “internal threats”. He praised Nazi Germany as an example of “race pride” from which India could learn.

Neerja Chowdhury, a political commentator and columnist reported: ‘The party advocates that to be a true Indian one has to be a Hindu. It describes other religious minorities, Sikhs, Jains, Buddhists, as part of India, because their faiths originated there. They believe that even India’s Muslims are actually Hindu because their Hindu ancestors were forced to convert to Islam’.

The anti-conversion laws, ban on cow slaughter, annexation of the disputed Jammu and Kashmir State, and a combined civil code are RSS’s demands. The RSS wants to convert non-Hindu to Hinduism under its homecoming (ghar wapsi) policy. C.P. Bhishikar’s biography of Hedgewar, Keshav Sanghnirmata tells how tae RSS founder equated Muslims to yavana (snakes). The RSS spurns Indian Constitution and believes India is a place for Hindu nation (rashtra) exclusively.

The RSS’s genocidal role is a caricature of the Indian constitution, visualizing a `sovereign socialist secular democratic republic’ and its article prohibiting discrimination on the grounds of religion, race, caste, sex, or place of birth.

Since 2006, there had been several terror attacks at locations with a majority Muslim population. The deadliest attack was February 2007 bomb explosions on the Samjhauta Express, killing 68, including 43 Pakistani nationals.

In the same year, there were two more blasts at Muslim places of worship. The investigations revealed the attacks were carried out by Hindu nationalist organizations.

For instance, Swami Aseemanand was accused of conspiracy in the Samjauta attack, the 2007 Ajmer dargah, and the 2007 Mecca Masjid blasts.

Pragya Singh Thakur, also known as Sadhvi Pragya, is currently a BJP MP, accused in the 2008 Malegaon blast. Six people died and over 100 others were y an explosion on a motorcycle near a mosque Malegaon. No court could dare punish the terrorist.

The RSS founded the Jan Sangh, the BJP’s ancestor, in 1951. It has been an umpire in times of BJP crisis within and provide indispensable cadres during election campaigns.

Driving force for Hedgewar to form RSS was Vinayak Damodar (Veer) Savarkar’s ideas on Hindutva and motherland. Savarkar had spelled out that only those who considered India as their fatherland and a holy land could be considered patriots. He ruled out Muslims, suggesting that their patriotism should always be suspected.

On 27 April 1948, Vallabhbhai Patel wrote to Jawaharlal Nehru: “I need hardly emphasise that an efficient, disciplined and contented service … is a sine qua non of sound administration under a democratic regime even more than under an authoritarian rule. The service must be above party and we should ensure that political consider­ations either in its recruitment or in its discipline and control, are reduced to the minimum, if not eliminated altogether.”

An RSS-ridden civil service cannot work a secular constitution. For, “it is perfectly possible to pervert the constitution, without changing its form, by merely changing the form of the administration and to [sic] make it inconsistent and opposed to the spirit of the constitution”.

The parliamentary system is based on a politically neutral civil service. Put political favourites in crucial positions and the entire system is perverted. Yet, hordes of RSS members were recruited into civil service.

Shashi Tharoor, the Congress nominee for UN secretary-general, said, “We are living in a country where on the one hand the Prime Minister says the Constitution is his holy book and on the other hand, he extols as a hero and instructs his Ministers to study the works, writings, and teachings of Deen Dayal Upadhyaya, who explicitly rejects the Constitution.”

When shall the world wake to recognise the hydra-headed monster that RSS is?

Sir, this is with the reference of the letter ‘ Unequal salaries’ by Faheem Hussain, published in Dawn. The salaries of the government servants...
Read more
Letters

The world’s scientists are working hard for a vaccine research as soon as possible. Since the virus is widely spreading. Very recently, The Minister...
Read more
Letters

Pakistan is a country where favoritism and nepotism mostly rely in the educational departments. This is when a person is treated unfairly or unequally...
Read more
Letters

There have been various pop-up messages one can easily get from Google about the ongoing climate crisis fight. The various sources have just confirmed...
Read more
Comment

Life appears to have turned itself upside down as a result of the pandemic. In Pakistan this applies to the urban setting more than...
Read more