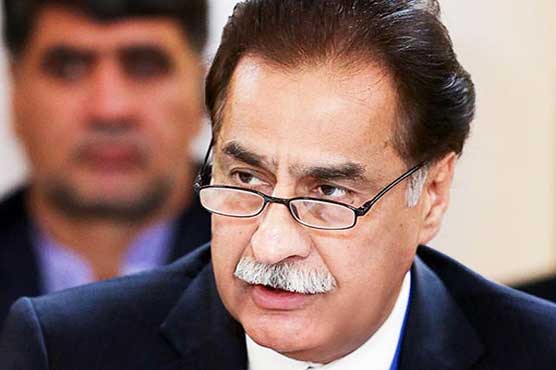 LAHORE: Former National Assembly (NA) speaker Ayaz Sadiq on Thursday claimed that Khawaja Asif and one other Pakistan Muslim League-Nawaz (PML-N) leader were asked to part ways with the party.

Ayaz, while speaking to reporters, said Asif was asked about a month ago to quit and he also informed the party leadership about the development.

He also revealed that Asif rejected the offer and said that he has spent three decades in the party and cannot leave now that the party was in the opposition.

The PML-N leader further said that the name of the person, who pressurised Asif, will be revealed at the right time. He also said that a forward bloc cannot be formed because no one wants to be part of it.

The former speaker also expressed reservations on the appointment of the new interior minister and said that all praise to the wisdom of the person who handed over the portfolio to Sheikh Rasheed Ahmed.

The anti-graft watchdog arrested Asif from Islamabad Tuesday after he failed to provide required evidence in an inquiry pertaining to being in possession of assets beyond his declared sources of income.

A day earlier, an accountability court in Islamabad handed him to the bureau on one-day remand for him to be transferred to Lahore where the case will be heard.

In a detailed charge sheet against Asif, the agency said it was carrying out investigations against the PML-N leader under Clause 4 of the NAB Ordinance, 1999, and Section 3 of the Anti-Money Laundering Act, 2010.

“Before assuming the public office in 1991, the total worth of Khawaja Asif’s assets was Rs5.1 million which increased to Rs221m in 2018 after serving on different posts which do not match with his known sources of income,” said the statement.

“Accused Khawaja Asif claimed to have received Rs130m from a UAE firm M/s IMECO, but during the course of the investigation, he failed to present any solid evidence of receiving this amount as a salary,” it said, adding: “This clearly shows that the accused tried to prove his income through fake sources.”

Moreover, NAB alleged that Khawaja Asif was also running a benami firm “Tariq Mir and Company” which was registered in the name of his staffer. It said that an amount of Rs400m was deposited in the account of Mir and no sources of this huge amount were disclosed.

ISLAMABAD: Special Assistant to the Prime Minister on Health Dr Faisal Sultan has said that Pakistan will receive its first batch of the coronavirus...
Read more
NATIONAL