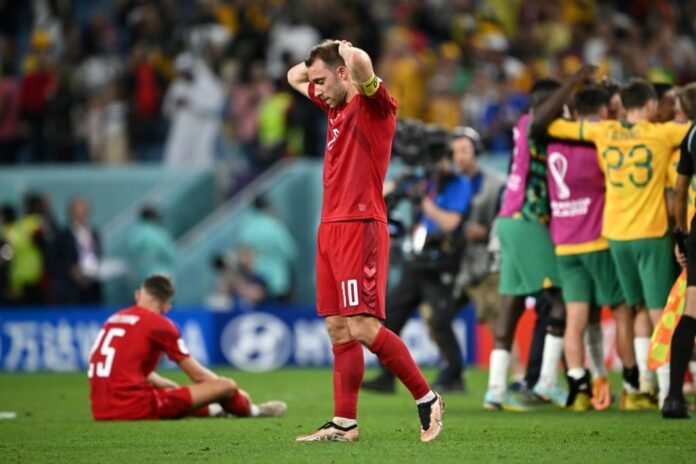 DOHA: Captain Simon Kjaer insisted that Denmark are still a top team despite their dismal 1-0 defeat to Australia which knocked them out of the FIFA World Cup 2022 at the group stage.

Denmark had come into the tournament on a high after reaching the semi-finals of last year’s European Championship and beating world champions France home and away in the Nations League.

But they exited the tournament in humiliating fashion, finishing bottom of Group D with just one point and a single goal scored after Mathew Leckie fired Australia into the last 16.

“We didn’t deliver as a team,” said Kjaer, who missed Wednesday’s match with an injury. “Massively disappointed but that’s part of football. We were flying very high in the Euro, now we’re pretty far down.

“We will have to take all the beatings and that’s right, we need to take everything. We’re an amazing team, still with a lot of quality and we have to learn from this.”

Denmark were one of the teams that abandoned plans to wear a rainbow-coloured armband earlier in the tournament after being threatened with sporting sanctions by world football’s governing body FIFA.

But Kjaer said that the team had been “mentally in a good place” despite the off-field row that focused on LGBTQ rights in Qatar, where homosexuality is illegal.

“I saw fire in the boys’ eyes before we went out so there was a strong belief that we could turn this around,” said the captain.

“We were just missing a bit. We were not able to put it out there today and that is probably the picture of our World Cup. But my mindset about the quality of the team hasn’t changed.

“We’re still a fantastic team and we still have a lot of quality. This is not our standard but I’m a very big fan of the team, so you win as a team and you lose as a team.”