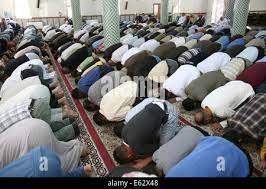 Having lived for a considerable period of time outside Pakistan, and having heard consistent testimony from friends who continue to live in various foreign countries, I can confidently say that there are few things that evoke awe and intrigue in non-Muslims more than the sound of the call to prayer (azan) and the sight of Muslims answering that call by heading to the mosque. There is a hypothesis that for the bulk of those who revert to Islam in the West, the seeds of interest in Islam are sown as a result of these sights and sounds.

Of course, the attraction of the mosque is felt by the worshippers too, but in very different ways those that cannot possibly be imagined by the outsiders. The first thing a man, who happens to be a regular at a mosque, does when he finds himself in a foreign country (or a new city) for any length of time is to look for a mosque. (It need not even be a strange far-away place away from home – he could merely be visiting a different part of his own hometown.) For few things give a man the sense of belongingness to a new setting quite like a mosque does. Everything else could be as different as it could conceivably be from what he is used to, but his relationship with the mosque remains fundamentally unchanged, whersoever he may be.

Of course, mosques could differ from one another in size and appearance in very basic measures. But all mosques have a way of evoking feelings that essentially remain the same, and regardless of how much time separates these experiences. The mosques that I have frequented over the years could not have been more different in terms of their architecture and the resulting aura. I have seldom lived in any one place for more than five years at a stretch, so these mosques have all been in very different locations. Temporally too, all these experiences span the best part of half a century now. The quiet joy and (on occasion) the exhilaration I have felt is fundamentally unchanged from when as a primary schooler I used to accompany my father to the newly-build mosque in Bahawalpur’s Bilal Colony to today, when it is my son who accompanies me to the local mosque. Any stability is more than welcome in a life so susceptible to relentless change.

Christians often marvel at the fact that Muslims living in the West are not in the least choosy when it comes to the particular mosque they pray at. As far as they are concerned, any mosque would do fine, so they pray at the one that happens to be closest to their location at any given time. Muslims, on the other hand, find it equally strange that a Christian of a certain denomination is likely to attend the Sunday service at a church (of his denomination) miles from his home, although there would be countless churches (belonging to other denominations) between the two locations. Although many Muslim clerics and imams are notoriously sectarian in their outlook, the ordinary Muslim, for the most part, is commendably ecumenical in his approach. As far he is concerned, any mosque is the mosque of Allah – as it most certainly is.

The mosques that I have frequented over the years could not have been more different in terms of their architecture and the resulting aura. I have seldom lived in any one place for more than five years at a stretch, so these mosques have all been in very different locations.

Of course, this is only one aspect of it. The mosque experience – even the most everyday type at one’s local mosque – is unique in multiple ways, although it would be easier said than done to describe the whole thing with any sort of precision or completeness. Only those who have had it first-hand can understand it in all its nuances.

It is of course the mosque from which the sound of the azan – which is every bit as gratifying for the Muslims as it is enigmatic as far as the non-Muslims are concerned – emanates five times every day. What, merely sounds exotic to the non-Muslim on account of its mystery and unintelligibility; encapsulates the complete message of Islam as far as the Muslim is concerned: it rehearses for him the vital concepts of tauheed, risaalat, success, and the requisite actions towards that end, so beautifully exemplified by the prayer, which the worshipper promptly proceeds to perform by way of an answer to the call itself.

Philosophers have presented man variously as essentially a rational being, a social being, an emotional being, and a moral being. Other thinkers have pointed out that the whole approach of thinking in terms of essentially-this or -that is erroneous, for man is a combination of all these beings. Be that as it may, there is no denying that there is a social side to man which requires him to interact with his fellows. The beauty of the opportunity for social interaction provided by the mosque is that one can be part of the community without being very vocal and outgoing. This is a godsend for those who are too introverted to be able to socialize in other settings.

There are a couple of areas, however, where one feels the mosque experience – wonderful that it is – can be made better. There are way too many men (usually older men) who do not take kindly to children praying in the first row, even if they do not distract anybody. There is no rationale behind this at all. If anything, these boys need to be encouraged for reporting early for the prayer. We need to even display affection and understanding for those toddlers who accompany their elders to the mosque and can be heard running around at the back. Kids of that age do muck around and engage in all sorts of silly activities; but it is how the adults respond that is crucial here. Being harsh can easily be discouraging and counter-productive in the long run, considering that these kids are the future.

Let me end with another little complaint. Although matters have improved considerably from what they used to be till some years ago, there are still plenty of those who make it their business to cover every uncovered head with plastic eyesores referred to as caps, placed for their convenience in most mosques. (Whoever thought of inventing these atrocities?) This practice is in equal measure unnecessary and vexing.