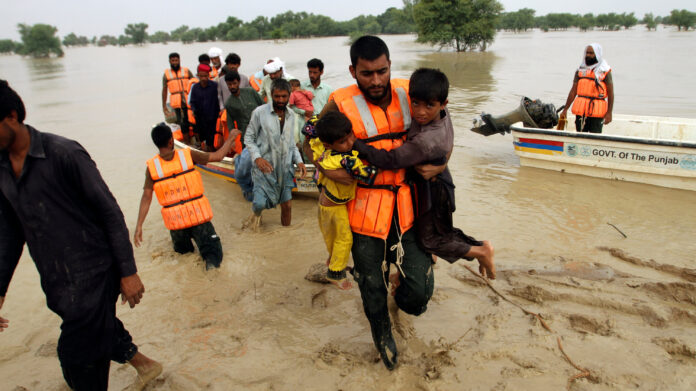 The year 2022 brought Pakistan to the edge of a political, economic, and humanitarian crisis. The country was struggling for stability, in which, another natural crisis – a flood, emerged and proved the worst of its kind in its 75-year history. The catastrophic floods affected 33 million people out of 220 million of the country’s population. The affected population of 33 million can be imagined by comparing the total population of Canada (38.2 million), Malaysia (32.7 million), Poland (37 million), Saudi Arabia (35.3 million), etc. Almost one-third of the country’s area is submerged bringing an estimated financial loss of $30 billion and it is expected flood water could take six months or so to recede.

Pakistan has faced extreme weather conditions due to climate change that triggered the monsoon to be started in June, with 67% rainfall above the normal level in a single month breaking the record for being the wettest since 1961. It has been observed, Pakistan has faced the hottest months of April and May, causing 100 deaths in southeast Pakistan and northwest India. The higher temperature caused the glaciers to melt at increased rates. In this regard, the country has more than 7200 glaciers, and the meltdown of such a large number of glaciers has created flood water to run at a higher speed. Other than this, the industrialized countries from the North have globally affected climate in form of excessive production of carbon emissions. In this regard, Pakistan has a contribution of safer 0.4 per cent in carbon emissions comprising 2.6% of the world population. According to experts, the continued carbon emission exceeding 92% from Global North will keep affecting the climate of the Global South, which is needed to be tackled on an urgent basis.

However, the political instability in early April by ousting the government of Imran Khan detracted the attention from an upcoming crisis, and the media glare reached a little late as involved in political developments. The infrastructure destruction has severely made a few places inaccessible by constraining civilians and government agencies to reach the affected population. According to the authorities, 6.4 million people require urgent humanitarian aid in this regard, and various foreign and local aid is being witnessed. For a long- term prevention and rehabilitation, there is a need for an aggressive plan, which should be followed from one government to another. The question here is, how to keep a cheque on continuity of plans if the government changes? Normally, it is seen, the previous plans are abandoned by the new government by introducing an alternative plan. Such a waste of money, and is being wasted again and again. Strict follow-up and monetary cheques are suggested in this regard. For taking preventive measures, forests are needed. Pakistan already having only 5% of the area forested, which shows a forest deficit. The country is having higher deforestation rates due to rampant fires and uncontrolled logging. If the same pace will be continued, the country will be more susceptible to severe floods in the future.

The disaster-hit country has caught international attention, and in this regard, international and national aid and pledges have been placed. The United Kingdom pledged $17.3 million, European Union $1.8 million, the U.S. $50 million, and Germany $13 million. Other countries are also coming up for help. Still, financial aid is not enough for catering to and rehabilitating the affected people. UN announced an initial flash appeal of $160 million for Pakistan. In this regard, UN Secretary-General Antonio Guterres also visited Pakistan and stated that “never seen climate carnage at this scale”. According to World Health Organization (WHO), respiratory infections, typhoid, skin diseases, diarrhea, and vector-borne diseases, such as dengue, and malaria have been reported in affected areas. They have urged for urgent provision of clean drinking water, sanitation, food, hygiene kits, medicines, shelter, clothing, and shoes to provide immediate necessities.

According to World Health Organization (WHO), respiratory infections, typhoid, skin diseases, diarrhea, and vector-borne diseases, such as dengue, and malaria have been reported in affected areas.

The concern here is, Pakistan will go a long way to resume normal activities in severely affected areas of Sindh and Balochistan, which were the worst areas affected by floods. The disaster management plans needed to be well-planned for the future. The external actors are not a permanent solution to this problem. There is a need to look into the systems for properly managing and functioning internally. However, it is an awakening call for Global North as well, to think and help in the reduction of carbon emissions as the developing countries do not have that many resources to spend. Luckily, Pakistan has received a chance also to make its voice reached internationally through the 77th UN General Assembly’s Session.

In the case of Pakistan, it has already taken a $1.2 billion loan as a bail-out package to tackle its economic crisis. How much itself, a country would survive a such disaster? It is not a worry only for Pakistan but a worry for developed countries, who are the major contributing members to climate change. UN Secretary-General’s concern can be observed when urged ‘debt-reduction mechanisms’ for Pakistan. He was of the view of saving lives through the mechanisms and livelihood in Pakistan, which is not drowning in floodwater, but also debt. A lot is being done for the country, but there is much more needed, and mutually can be handled to survive the disaster and tough times. At the moment, the disaster scale is in raw numbers, the real scale would be analyzed after the drainage of flood water. It’s a real worry, and preventive measures with proper planning are needed to implement in handling similar crises well ahead of time in the future to avoid damage on such a larger scale.