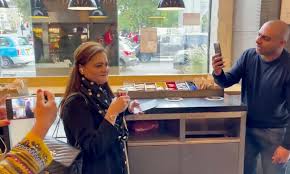 The Ministry of Interior officials Tuesday clarified that the identity cards and passports of Pakistanis living in the United Kingdom cannot be revoked merely on the basis of their inappropriate behaviour towards lawmakers.

The clarification came after Special Assistant to the Prime Minister Ata Tarar announced that action will be taken against those who misbehaved with Information Minister Marriyum Aurangzeb in London.

The interior ministry has clarified that a person’s passport and identity card cannot be revoked because of their unruly behaviour, adding that separate legal requirements are to be fulfilled in order to block these documents.

Earlier today, while addressing a press conference, Tarar condemned the incident that took place in London, assuring that action will be taken against all those who misbehaved with Aurangzeb.

“I condemn the way Aurangzeb was treated. I have prepared a request which I will submit to the Ministry of Interior,” he said, adding that the trend of publicly harassing PML-N leaders, which has been going on for quite some time now, was “unacceptable”.

He had said that the character certificate issued by the interior ministry for visa purposes will be cancelled for all those people who were involved in this act.

Two days ago, Aurangzeb was harassed by a group of PML-N’s political opponents while she was in a coffee shop in London, United Kingdom.

The information minister was in a café near the Marble Arch station to buy coffee where she was heckled by a group of PTI supporters, who surrounded the minister and began yelling at her. The crowd also continued to videotape Aurangzeb without her consent.

The women supporters of PTI continued to target her with inappropriate allegations, while also accusing her of being a thief.

The PTI protestors swarmed around Marriyum and did not let her be during what appeared to be her time off from her official duties as a minister.