Pakistan Copes with the Unprecedented Floods

The armed forces have played a sterling role 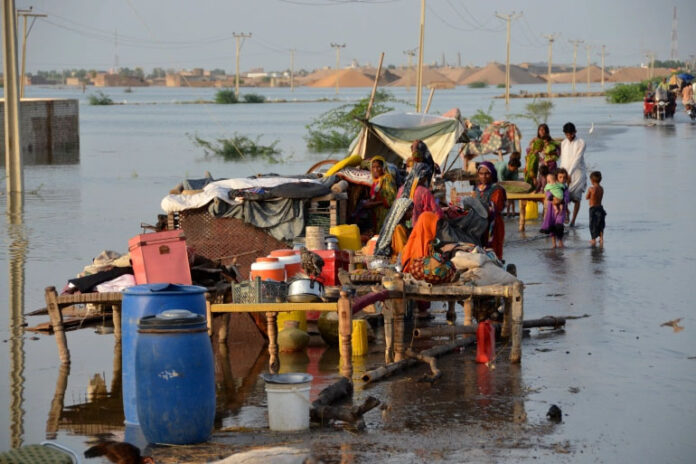 The unprecedented deadly floods and extraordinary monsoon rains which began in June, this year have destroyed lives, livelihoods and infrastructure in various regions of Pakistan, leaving one-third of the country underwater.

Media reported that owing to the floods, more than 2000 persons have died; more than 30 million people have been affected. More than two million homes, two million acres of crops and some 3000 miles of roads have been damaged. Half a million people are in displacement camps and many others are without shelter.

Officials say this year’s floods are comparable to 2010—when over 2,000 people died and nearly a fifth of the country was under water.

Foreign media called Pakistan’s floods as a result of climate change with a serious climate catastrophe.

The rain spell and floods have negative effects on the people in the flood-ravaged areas— also from the pandemic diseases— as some persons have died.

During a two-day visit to Pakistan, the UN Secretary-General, António Guterres appealed to the international community on September 9 for massive financial support— flood-hit impoverished Pakistan needs about $30 billion to recover from the floods, which he, himself assessed by surveying these areas through helicopter

Taking cognisance of large scale devastation, the Pakistan Government has declared a state of emergency. The government has established a flood relief fund, namely the Prime Minister’s Flood Relief Fund, 2022 for providing relief and rehabilitation to the flood-affected persons. The Fund accepts donations and contributions both from domestic and international sources.

Meanwhile, in a live telethon on August 29, former Prime Minister Imran Khan raised funds for victims of devastating rains and floods, and received commitments of over Rs 5.5 billion donated by overseas and domestic Pakistanis. In a second telethon on September 11, this year, Khan collected approximately Rs 5 billion for the flood victims.

In fact, the country’s three armed forces, including civil society and humanitarian organizations (NGOs) have been assisting in the rescue and relief efforts which continue in the flood-affected regions, while the National Disaster Management Authority (NDMA) is also playing its role in this regard.

Notably, whenever the nation of Pakistan faces a major challenge, people look at the armed forces for support. It is quite true in case of the current flood circumstances, which have wreaked havoc in almost all provinces of the country. The Pakistan Army, Pakistan Navy and Pakistan Air Force are all actively participating in flood rescue and relief operations.

These forces have established relief funds for the victims of the flooding areas. In this spirit, all the general officers of the Army have also donated one month’s salary to help the victims. Apart from this, other officers are also giving financial donations on a voluntary basis. The Pakistan Air Force Women’s Association (PAFWA) has collected cash donations amounting to more than Rs 14 million.

And besides monetary assistance, all three branches of the country’s defence are distributing rations on-ground. The Army has established more than 200 relief collection points across the country and the Air Force has also set up camps. Donations by various segments of society are being dispatched to these flood relief camps.

However, these three forces have been transporting and distributing packages— basic needs of life such as rations, cooked food packs, fresh drinking water, blankets, clothing items, tents, and son on. These forces have also set up medical camps which are providing medical treatment and medicine to the flood-affected patients.

Particularly, the Pakistan Army is engaged in massive rescue and relief operations in the affected areas. The Army has established a Relief and Rescue Organisation under Headquarters Army Air Defence Command to manage these operations. Army teams rescued a number of people stranded in the flood-affected areas, and shifted them to safer places. An example of the relentless bravery shown by the Army is that of Commander 12 Corps Lt Gen Sarfaraz Ali, Briadier (approved Maj Gen) Amjad Hanif, Brigadier Muhammad Khalid, Major Saeed Ahmed, Major Muhammad Talha Manan and Naik Mudassir Fayyaz who embraced martyrdom after their helicopter crashed during a flight en route from Quetta to Karachi in relation to a rescue operation.

Whil, the fleet of helicopters of Army Aviation, the Pakistan Navy and Pakistan Air Force were deployed in flood-stricken areas, their emergency response teams are also assisting the civil administration in rescue and relief efforts of South Punjab, Balochistan and Sindh. Thus, these forces have also saved the lives of thousands of individuals.

It is mentionable that on a non-official level, donations have poured in Pakistan’s flood-ravaged regions from some western countries especially from British citizens of Pakistani origin and UK-based charities.

It is notable that many individuals, NGOs, welfare groups, including political and religious entities set up camps in various cities and towns of Pakistan to collect basic necessities of life and have been sending the same to the flood-hit areas.

For instance, based in Lahore, Asani Trust and Bahria Town Housing Society have collected basic needs of life, including mosquito nets, and sent them to the victims of floods.

Another Lahore-based renowned NGO, Custom Health Care Society led by Dr Asif Mahmood Jah, dispatched various goods as well as mobile healthcare vehicles with medical equipment to help the deserving persons, while he himself visited the flood-destructive places and provided the patients with medical consultation, including medicines.

In the meantime, many civilian volunteers of Pakistan are working on the front lines to conduct rescue operations and deliver emergency relief. For example, a journalist of a newspaper spoke with one of them: Dr. Imran Lodhi, a climate activist and university teacher who led a group of students to deliver tents and food in Punjab province. Volunteer groups like his have been helping to mobilize people in communities who are trying to reach the affected areas.

Pakistanis’ philanthropist contributions to the flood-affected people could also be judged from another instance. A woman donated all her gold jewellery to them.

Taking note of the drastic effects of the deadly floods, UN agencies and many western countries, including China, Japan and Islamic countries like Turkey, have sent several planes loaded with aid, while the UAE has been one of the most generous contributors, and sent so far more than 45 flights carrying aid for flood victims. Numerous rich countries as well as the EU have also announced financial support. For example, the EU is providing €350,000, and the US just will provide $30 million in humanitarian aid to respond to the floods.

But, this financial assistance is not enough, as Islamabad requires $30 billion to respond to the massive losses because of extraordinary floods and rains.

In this respect, during a two-day visit to Pakistan, the UN Secretary-General, António Guterres appealed to the international community on September 9 for massive financial support— flood-hit impoverished Pakistan needs about $30 billion to recover from the floods, which he, himself assessed by surveying these areas through helicopter.

During his repeated trips to the flood-affected areas of Sindh on September 10, talking to the media, army chief General Bajwa urged the people of the country to help the flood victims generously and stated that the world will help to some extent.

Nonetheless, apart from the services of the armed forces, Pakistan has a tradition of volunteer help to cope with a catastrophe. This has been seen in case of the current sea-like flood waters in the country.