Imran warns detractors against exposing those behind his ouster 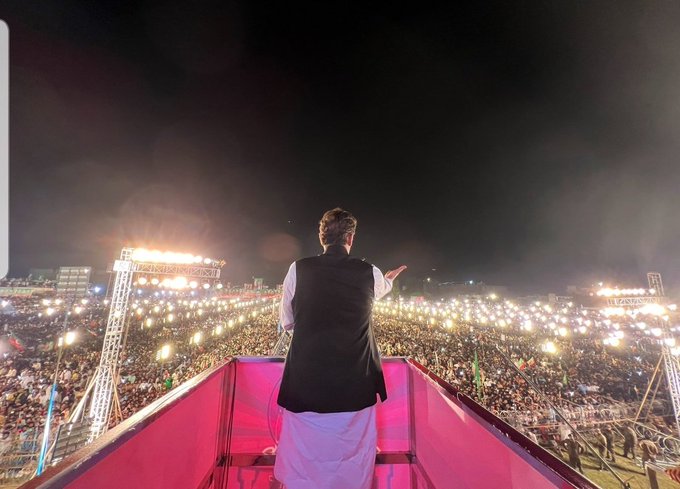 SARGODHA: Former prime minister and PTI Chairman Imran Khan Thursday warned his detractors against exposing those behind the plot to oust him, asking them not to push him against the wall.

Addressing a mammoth public rally, Khan said while the country’s economic growth was upward and institutions like Moodys and Fitch were issuing positive reports, why did you conspire and installed these crooks upon the nation who have unleashed high inflation and price hike on poor Pakistanis.

“I am being pushed against the wall through bogus FIRs of terrorism and others … journalists who speak in our favour are being subjected to victimisation. The more you suppress my party, the more we will rise,” he said.

Khan said he will reveal the names of all those allegedly involved in intimidating him and his supporters. He said that detractors were trying to stop him from winning with a two-thirds majority.

Imran, the ousted prime minister, said his opponents have already “lost the match” against him and whatever they do next to defeat will only harm the country’s interests. “Don’t think about your petty vested interest… think about the country… the people are not ready to see their future in leaders like Zardari and Nawaz.”

He said, “I have been tolerating this for the last months but don’t push me to the point where I expose all faces who created all this mess for their vested interests.”

“The more you try to subdue me, the more I will fight harder,” he added.

“I have been tolerating this for the last months but don’t push me to the point where I expose all faces who created all this mess for their vested interests,” he added. “The more you try to subdue me, the more I will fight harder.”

Speaking about rising inflation and electricity prices, Imran said the country was moving in the right direction and all economic indicators were positive when his government was toppled through a “foreign conspiracy”.

“Now, I want to ask who is responsible for imposing the thieves on the country and creating this mess.”

“Economy is sinking, remittances are declining… now the only way to come out of this quagmire is to hold free and fair elections,” he added.

The PTI chief said the coalition government led by the PML-N suffered a shock defeat in Punjab by-elections despite all “rigging attempts”.

After by-polls results, they got scared that if early elections are held I will secure two-third majority, he said.

“So they started a conspiracy to disqualify me and the decision was taken behind a closed door to ‘completely eliminate’ me… that’s why I have recorded a video in which I had named four persons who will not be spared by the nation if anything happens to me.”

Imran said he was booked for terrorism charges for merely saying vowing legal action against those were involved in the torture on Shahbaz Gill.

He also asked the ruling PML-N not to compare him with its supremo Nawaz Sharif, saying he earned money through hard work in abroad.

Hitting out at former president and PPP leader Asif Zardari Imran said, “He [Zardari] has a disease that his legs start shivering when he sees money and he is ready to lay down his life for wealth.”

At the start of his address, Imran said he will make all-out efforts to help the flood victims across the country and for this purpose he said a command and control centre will be established to monitor the relief operations.