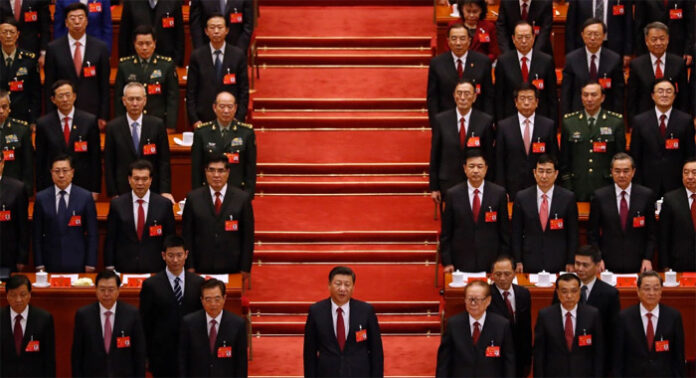 The forthcoming 20th Congress of the Communist Party of China (CPC) will be held on October 16, and the entire western media is keeping an eye on it to eee if Xi Jinping will get his third term as General Secretary with more powers to steer the country according to his vision. Western media always gives a western version of the rise of China and the iron grip of President Xi Jinping over the system and deep down negativity is part of anything that is published or broadcast in western media. Nonetheless, the interest of western media in the forthcoming CPC Congress indicates this event is taken as important and significant.

Last week I attended a dialogue on August 29 organized by the Pakistan-China Institute (PCI) on the upcoming 20th National Congress of the CPC under the flagship ‘Friends of Silk Road’ initiative where Minister of State for Foreign Affairs Hina Rabbani Khar, Senate Foreign Affairs CommitteeChairman  Senator Mushahid Hussain Sayed, Chinese Ambassador in Pakistan Nong Rong and a number of Foreign Affairs experts explained the importance of the forthcoming CPC Congress in relation to Pakistan-China relationship, BRI, and CPEC and my brief talk with Ambassador Nong Rong triggered my interest to understand why the world is looking at this Congress that is a routine event that takes place after every five years.  The foremost question one can ask is how this week-long event will determine the future course of Chinese politics, economy, and social growth. The answer needs an understanding of the importance of the event within the Chinese political system.

Around 2,300 delegates, representing the Chinese Communist Party (CCP) having 90 million members, will be part of the event and will elect the Central Committee, which in turn will approve the members of the Political Bureau and its Standing Committee, the party’s most powerful decision-making body. The 25-member Bureau is the highest policy-making body in China.

Everybody is sure that President Xi will be elected for his third term and would continue his policies that have taken out more than 800 million people trapped in poverty. There have also been significant improvements in access to health, education, and other services under the last two terms of President Xi. Even the World Bank accepts that China is now an upper-middle-income country and President Xi is now working to uplift the standard of living of a large number of people still considered poor by the standards of middle-income countries, including those living in urban areas.

Since I am not an economist and my core area of work is the philosophy of communication, therefore my central interest is how China is tangibly articulating its policies and the impact of these policies in my region and in the world. Here I find two important developments that took place under the leadership of President Xi. One is the overall well-being of the population that I indicated above (poverty alleviation) and the second is media reach abroad. Sitting in Europe I can find every important news and decision of the Chinese government through Chinese state-run televisions, news agencies, and online newspapers and can research social uplift if I go deep into the online content available.

China should sync its private as well as public media in a way Russia had already done as can be seen by how RT ((formerly Russia Today or Rossiya Segodnya) has become the biggest threat to Western powers. This led to its being banned in Europe after the Ukraine-Russia conflict while setting aside all so-called European norms of freedom of expression and free media. Chinese media provides important information and state narrative but still lacks a strong impression on the user’s mind as the RT does.

A report by Think Tank “AHK Greater China” indicates that with a population of 1.3 billion people, China is rapidly moving into the information age and has an immense range of communication channels. China is characterized by its fast transformation from rigid government-owned structures into new business models, from the traditional press into new media and innovative forms of news making (immersive media), while Michael Keane who is a Professor of Chinese Media and Director of the Digital Asia Research Node in the Centre for Culture and Technology at Curtin University, Perth, Australia writes that private media industry has become economically successful  China’s television industry has grown into a complete system with high-tech programme production, transmission, and coverage.

Altogether there are about 3,000 television stations across the country. CCTV (China Central Television) is the major state television station in the Chinese Mainland, with a network of 20 channels and accessibility to over one billion viewers. China has the most television viewers worldwide as well as being the largest market.

In Europe, one can watch CCTV-4 International, CCTV-9 International (in English, targeting an English-speaking audience), CCTV-E (in Spanish), and CCTV-F (in French). These channels are showing the beauty and culture of China and attract foreigners to visit the mysterious land of the East. These channels not only report important news and events that happen in China and around the world, but also give introductions to China’s history, culture, landscape, and social developments.

Online Chinese newspapers and news agencies accessible in Europe are also very important tools to spread the Chinese vision and culture. Xinhua News Agency, China Daily, and China News Service are the major sources of information about China in Europe, and thousands of smaller media groups in Europe benefit from these online materials. Covid-19 and the western campaign against China for its alleged involvement actually boosted the readership of Chinese news agencies in Europe as people tried to get the other side of the version. Chinese media (newspapers, news agencies, magazines, and online portals) have diversified rapidly over recent years. Unconfirmed information suggests that around 2,300 newspapers and over 7,000 magazines and journals are in the local market in China. Whenever you read any research report about media written by western researchers/writers or funded by the western world, you will find loaded dictions like “state-controlled”, “censorship”, “absences of free media” and so on. Channel 4, BBC, CNN, VOA, ABC and many more will tell you that Chinese media is state-funded or state-controlled but they would not tell you that they are also directly or indirectly state-funded.

UK Culture Secretary Nadine Dorries in one of her interviews stated that the UK government is looking very seriously at how the UK funds the BBC and a new style of funding would be decided well ahead of the BBC Charter renewal in 2027’.

“We are ready to implement a new way of funding the BBC,’ she says. ‘We’re going to be looking at how Ofcom holds the BBC to account and then very shortly after that we will be announcing other measures that we are going to put into place to start looking at how the BBC will be funded in the future,” she commented.

I am confident that Chinese media is strongly fighting out western propaganda against Chinese economic and social growth and is mature enough to protect the national interest.

I have only one suggestion, that China should sync its private as well as public media in a way Russia had already done as can be seen  by how RT ((formerly Russia Today or Rossiya Segodnya) has become the biggest threat to Western powers. This led to its being banned in Europe after the Ukraine-Russia conflict while setting aside all so-called European norms of freedom of expression and free media. Chinese media provides important information and state narrative but still lacks a strong impression on the user’s mind as the RT does.

I believe this is the perfect time to align all resources of Chinese state-run media to mitigate the expected negative media campaign that will emerge in the Western media against Chinese President Xi and the CPC well before the 20th Congress will take place in October. Although decisions made inside the Congress are internal working of the Party, the Western media will connect all decisions to the external world. The foremost targets of Western media in the last 10 years have been BRI, Chinese exports, the strong grip of President Xi over his party, CPEC, and China’s engrossment in eastern Europe and Africa.

I trust that Chinese media in a simpler but stronger way will leave an impression on western users before, during, and after the 20th Congress of CPC.