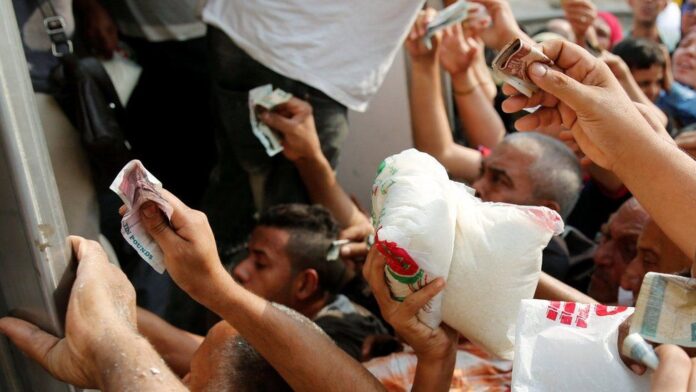 When describing Bangladesh’s present economic status to the media during an online conference on Tuesday, Rahul Anand, division chief in the IMF’s Asia and Pacific Department, said that Bangladesh’s external position is “quite different from several nations in the region.”

According to him, Bangladesh’s external debt-to-GDP ratio, which is close to 14%, is moderately low, primarily concessional in form, and has a minimal risk of debt crisis.

Following his interview that was recently published in the London-based daily, Bangladeshi Finance Minister AHM Mustafa Kamal sent a response to The Financial Times. “Today, the reserves stand at $40 billion, enough for more than five months’ import payments and beyond the risk threshold prescribed by the IMF.”

After Sri Lanka’s economy collapsed, focus shifted to Bangladesh as the nation looked to prevent the financial crisis that broke out in the island nation. Concerns about the nation’s economic health arose as Dhaka sought a bailout package from the IMF and amid an increase in fuel costs. However, a senior executive from the Washington-based global lender dispelled such dire predictions.

The economist responded to allegations that Bangladesh’s $40 billion reserve was a sign of “impending catastrophe” by saying that “even though Bangladesh’s reserves have decreased, the stockpiles are still large enough to handle four to five months of potential imports.”

There were rumours that the government’s most recent record fuel price increase was a requirement imposed by the IMF. The IMF official, however, refuted the charges, stating that there was no connection between the fuel price increase to bring it into line with the market pricing and the support program sought by the IMF (from Dhaka). The external debt of Bangladesh is only about 14 percent of GDP, which is quite modest.

According to the media reports, Rahul Anand, division leader at the IMF’s Asia and Pacific Department, said Bangladesh is not in a crisis and its external position is “quite different from numerous countries in the region.”

The government needs to focus more on our farmers so that the rising costs of diesel, seeds, fertilizer, and other inputs won’t deter them from growing food crops like grains and vegetables. Not least of all, the government should take the required actions to provide farmers with cutting-edge equipment.

While the Sheikh Hasina government has set a target of more than $60 billion in export income for the following fiscal year, Bangladesh’s exports in the 2021–2022 fiscal year exceeded the $50 billion threshold. The government was able to achieve a consistent increase in remittances worth $813 million in the first ten days of August thanks to the new opening of the Malaysian labour market and a number of other government initiatives. The amount of remittances received through the banking system in July was $2.09 billion, the most in the previous 14 months.

Due to Sheikh Hasina’s astute leadership, the nation implemented a number of preventive steps in response to the surge in spot market LNG prices at the start of the ongoing conflict between Russia and Ukraine.

Among those measures were planned power outages in various regions of the nation, the suspension of a few development initiatives geared toward the future, and restrictions on government leaders’ overseas travel.

To compare RST money to an IMF bailout package as sought by Pakistan or Sri Lanka is obviously to ignore the forest for the trees.

Nasrul Hamid, the nation’s junior minister for Power, Mineral, and Energy Resources, has already given the people of his country the assurance that the ongoing load shedding will end in September. He has also made further hints about implementing changes to oil prices in line with international markets. Importantly, despite the price increase, Bangladesh continues to provide its citizens with the most affordable options, and the increase in oil prices was intended to reduce a staggering subsidy payment of more than BDT 8000 crore made by the government over the previous four months (February 2022—June 2022).

According to the World Bank’s South Asia Food Security Update published on Thursday, there is no significant food shortage in Bangladesh. It is important to note that the government has implemented a number of initiatives to boost the nation’s output of both food grains and vegetables. Bangladesh wouldn’t experience a food crisis even if it was impossible to buy food from other nations owing to market volatility worldwide.

The administration is committed to ensuring everyone has access to food. As a result, it must come up with strategies for increasing food production while providing farmers with unwavering support. Everyone should keep in mind that expanding the agricultural industry needs to continue to be a top focus.

To meet its demand, the nation has a sufficient supply of all types of fertilizers. 645,000 tonnes of urea fertilizer, 394,000 tonnes of TSP, 736,000 lakh tonnes of DAP, and 273,000 tonnes of MOP are currently in stock. Fertilizer is currently in greater supply than it was during the same time last year. The farmers’ farm loan of Taka 2830.61 core was also distributed by the state-owned commercial banks.

To ensure the nation’s citizens have access to adequate food, the ministries of agriculture and food must exert all possible effort to commercialize and profit from agricultural activity.

The government needs to focus more on our farmers so that the rising costs of diesel, seeds, fertilizer, and other inputs won’t deter them from growing food crops like grains and vegetables. Not least of all, the government should take the required actions to provide farmers with cutting-edge equipment.