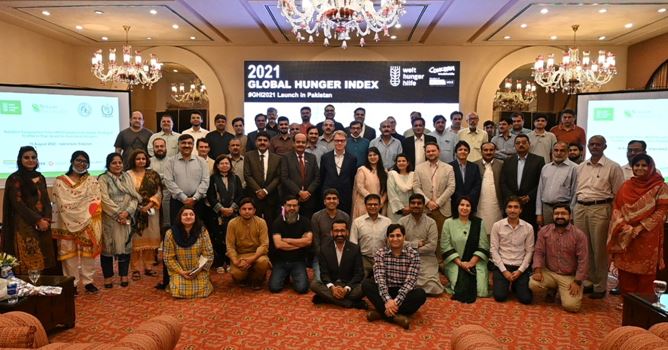 16th August 2022, Islamabad – The world is off track in the fight against hunger, moving further and further away from the binding goal of ending hunger by 2030. The latest UN reports have already sounded the alarm, as the number of hungry and poor people has been rising again for several years. Worldwide, some 811 million people suffer from hunger and 41 million live on the brink of famine. The 2021 Global Hunger Index (GHI) examines the hunger and food situation in 128 countries and confirms the significant setbacks in the fight against hunger. 47 countries will not even reach low hunger levels by 2030, 28 of which are in Africa South of the Sahara.In the 2021 GHI, Pakistan ranks 92nd out of 116 countries with sufficient data to calculate GHI scores. With a score of 24,7 Pakistan has a level of hunger that is serious. Since 2000, the GHI score of Pakistan has decreased by 12, which represent a percentage decreased of 23.7%. Pakistan’s GHI score trend shows that, while the decline in the score is steady, it has decreased at a faster rate since 2012, meaning that progress in the fight against hunger is accelerating.

Dr. Omer Tarar, Principal Scientific Officer from PCSIR presented the findings of the report “Analytical Testing of FLORA in Thar desert for Nutritional Analysis”. In remarks by the Federal Ministry of Planning, Development and Special Initiavites, Dr. Nazeer Ahmed Chief of Nutrition, highlighted the importance of localized Nutrition Composition Table within agro-climatic zones. Climate Change and less adapted local food systems remain amongst the main drivers of hunger in Pakistan. The Country Director of the World Food Programme, Mr. Chris Kaye, delivered a keynote on the resilience of local food systems and the impact of climate change. In his remarks to the occasion, Mr. Ovidiu Mic, Head of Cooperation of the Delegation of the European Union to Pakistan commended the work against hunger and addressed sector as well as political recommendations. The event ended with vote of thanks by Dr. Arjumand Nizami, Country Director Helvetas, on behalf of Alliance 2015 and a networking lunch.