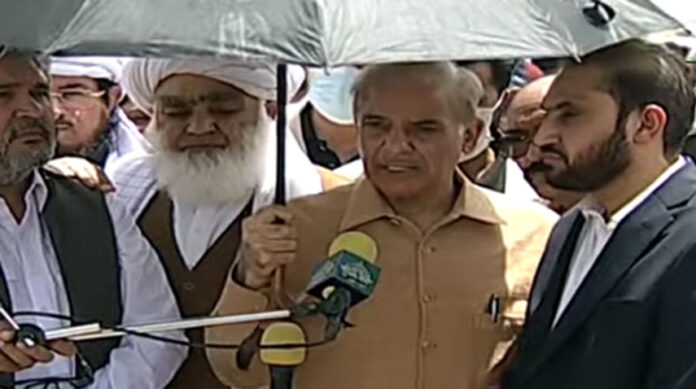 Prime Minister Muhammad Shehbaz Sharif on Monday reiterated that the federal government in collaboration with the provincial government had been making all-out efforts to provide succour to the flood-hit population of Balochistan.

Addressing a cheques distribution ceremony, the prime minister said that he reached to the people of the province at a time when they were facing a natural calamity that caused indescribable damage in different parts.

He said Balochistan was an important and huge province and its different areas like Chaman, Killa Saifullah, Lasbela, Jhal Magsi, Noshki and Quetta had been inundated by flash floods, adding about 142 lives were lost, while hundred others were injured and a large number of houses were partially or completely destroyed.

Besides, bridges and road infrastructures were dismantled due to monsoon deluge.

The prime minister said that he had visited different parts of the province where all departments of the federal and provincial governments and Pakistan army had been working closely for rescue, relief and rehabilitation operations.

The law enforcement agencies were also working day and night to help the affected population, he said.

“In this time of natural calamity, the provincial and federal governments and all their departments are serving you with the provision of medicines, food and tents. Medical camps have been set up, besides ensuring the provision of clean drinking water and treatment for the domestic animals” he added.

The federal ministers and Chief Minister Balochistan Abdul Quddus Bizenjo and other relevant authorities were present on the occasion.

The prime minister said that he could not say that everything was right despite all these efforts as there were loopholes which were being removed and cited an incident of negligence in Killa Saifullah where food and water were not provided in tents.

He said the chief minister took immediate action and suspended the responsible staff. It should be a warning to others that no leniency would be tolerated in this regard, he added.

He said that he had directed the NDMA chairman to distribute all the cheques among the affected families without any delay while maintaining transparency.

The financial amount was no substitute for the human losses, the prime minister observed and said, but the life had to move on and it was the responsibility of the government to cater to the needs of affected people.

The prime minister assured that the compensation support would be provided within the next few days and estimates were being made over the damages caused to crops and residences for the sake of transparency so that the deserving could get the due amount.

He further informed that the NDMA and PDMA in collaboration with the provincial government would make such estimates and said that he would request the chief of army staff to lend support in these efforts through relevant authorities.

The chief minsiter and other notables also highlighted the issues being faced by the local population and the efforts for the rescue and relief.

Earlier, Prime Minister Shehbaz Sharif directed the provincial government to ensure the disbursement of compensation money to the flood-hit people of Balochistan within 24 hours.

The prime minister issued the directive during a day-long visit to a tent city set up in the Khusnob town in Qilla Saifullah district to accommodate the people displaced by the floods.

Sharif was informed that four camps with medical facilities had been set up for flood-affected people and a tube well system in the area was functioning with solar energy to meet the water requirement.

The prime minister interacted with the flood-affected people living in the tent city and inquired about the facilities being provided to them.

He arrived in the capital of Balochistan in the morning on a day-long visit to oversee relief operations.

On his arrival at Quetta International Airport, the prime minister was given a detailed briefing regarding the ongoing relief efforts in the flood-affected region.

Pakistan has witnessed torrential rains since mid-June, leading to flash floods in different parts of the country.

According to a recent situation report circulated by the NDMA, 434 people have lost their lives in rains in different parts of Pakistan since the onset of the monsoon.

In Balochistan, nine people lost their lives in the last 24 hours, taking the overall death toll to 136 in rains since the beginning of the season. Another 70 others have been injured during this period.

Sharif’s visit to the province comes at a time when the meteorological department has predicted more than normal rain in August.

The Met Office has also forecast relatively high temperatures in mountainous areas, indicating a faster rate of snowmelt that may result in floods in the area.

ISLAMABAD: National Transmission & Despatch Company (NTDC) has devised a plan to generate power with cheap fuels during the next ten years and forwarded...
Read more
NATIONAL

ISLAMABAD: Prime Minister Shehbaz Sharif on Monday returned to the country after concluding his visit to New York and London in a special plane. Ishaq...
Read more
NATIONAL

KARACHI: One of the major reasons for the flood situation that occurred in the country after the record-breaking rainfall was that the past and...
Read more
- Advertisment -

September 27, 2022
TEHRAN: Iran is stepping up arrests of activists and journalists in a crackdown against civil society as anti-regime protests rage nationwide, activists say. 20 journalists...