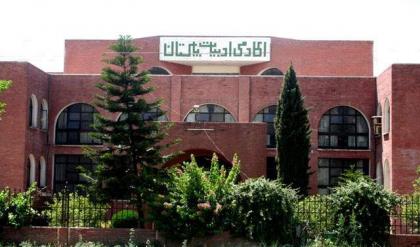 ISLAMABAD: The Pakistan Academy of Letters (PAL) ahead of the Diamond Jubilee Independence Day celebrations has published the first volume of “A Research and Analytic Study of Urdu Ghazal in Pakistan” to present a detailed genesis of the literary genre over the decades.

The purpose of the book was to provide a documented evidence of development of Urdu Ghazal as a separate genre of poetry in Pakistan and on the same hand it was an enjoyable event for the avid readers to cherish their longing for quality poetry, said Chairman of PAL Dr Yousuf Khushk.

The PAL Chairman while highlighting details of the book told APP that it included the poetic works of only those poets who paid their valuable and unconditional contributions to foster and embellish Urdu ghazal in the region, whereas, the work of new poets had also been added in this book who had earned a great name in Urdu ghazal during a short period of time.

“Every poet in this book has been discussed in three different parts. First part briefly introduces the profile and second part highlights the poetic identity of the poet, whereas, the best poetic items of the said poet are added in the third part,” he said.

He apprised that this series comprised of two volumes whose first edition was available for the readers and its second edition would be made available soon in the market.

“First edition is comprised of those poets, who lived in the territory of Pakistan before its inception, whereas, the second copy will consist of those poets who were born in Pakistan after the independence,” he added.

This book was not less than a gift for the ghazal lovers which was compiled by Khawar Ijaz, a renowned critic of Urdu ghazal after detailed research and deep analysis which would help readers to understand the history of Urdu Ghazal and its journey over the years to emerge as an epic literary genre in Pakistan, he said.