The constitution is no underwood, let alone valued 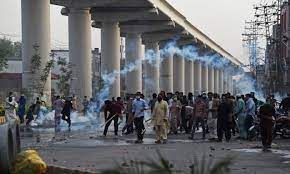 This perversion has been on a high for the last three months which has displayed a very horrific picture of the value of the constitution in our society. April 3 was the last date for the speaker of the National Assembly to call a vote on the motion of no-confidence but this did not happen; the deputy speaker gave an unconstitutional ruling, and what followed was a chain of unconstitutional acts

Now we may consider that unconstitutional, lawyers and law professors all over the country may consider that unconstitutional, even the Supreme Court may consider that unconstitutional, but a considerable section of the country still does not care. They see these acts as ‘divine’ which were necessary to thwart a ‘foreign conspiracy’ and by providing a pathetic logic they justify that when it comes to the defense of the country any action can be taken, be it an unconstitutional one. This way of thinking shows that for them the constitution is nothing but just a piece of paper that can be used in frying samosas and pakoras (not actually, it costs more than Rs 700 to buy a decent copy nowadays).
It seems like a blind ultra-nationalist wind is slowly (but surely) intoxicating every other person it finds out in the open. People forget that the very idea of having a law and constitution in the first place is to provide a system and order through which institutions and different organs of the state can operate. Those supporting these unconstitutional ideas are quick to advocate for their rights and liberty but turn a blind eye towards the words of the ‘green book’ that secure these rights and prevens them from being coerced by ‘foreign powers’ or those who are ruling them at home.

It is high time that political parties also realize that the only way forward is the path construed by the constitution. They should take the lead by withdrawing their support from any unconstitutional ideas or approaches. This will set an example for the rest to follow and will gradually enlighten the masses about the value and worth of following the constitution.

Even children are not protected from these villainous ideas. Their schools and colleges have become a hotbed for such volatile notions, as they are forced to support a political party’s narrative to prove their patriotism. Then these same kids are being exposed to disinformation campaigns and fake news, which is not only widespread on social media but also on mainstream television channels. In such a society one must not be surprised to come across blatant constitutional violations every other day.

Normally, countries that have been able to draft a constitution have usually done so after waging a war and bringing a revolution against their autocratic authorities/monarchies, The USA and France are two key examples. Their constitution-makers were envisaged as heroes, and the act of making the constitution was considered an act of glory. However, in Pakistan, the first two constitutions did not survive for long and the promulgation of the third constitution did not follow a victory or a successful revolution, but rather a setback in the 1971 war.

The people involved in drafting our constitution were either executed or have been stamped as traitors. This perception about the framers of the constitution has been floating around in our society ever since and has severely damaged the legitimacy of the constitution. A large section of the population does not view the act of constitution-making as a moment of victory or splendour, but as the preparation of a document that was drafted by ‘traitors’ to meet their political purposes.

Then, after its promulgation, there has been no whole-hearted attempt made by the political parties to connect with the people based on the constitution (except when they are not rejoicing in the pleasures of Islamabad), which has left the constitution as a plant without any roots. Even in schools and colleges, students are exposed to tainted Pakistan Studies textbooks and most of them are not aware of the existence and significance of the constitution even after their graduation. This practice should now end, and be replaced by teaching constitution in schools, starting from the preamble and the basic structure in primary schools to more advanced parts in Secondary and High Schools.

It is high time that political parties also realize that the only way forward is the path construed by the constitution. They should take the lead by withdrawing their support from any unconstitutional ideas or approaches. This will set an example for the rest to follow and will gradually enlighten the masses about the value and worth of following the constitution.

The job is not an easy one and it may take years, but if we are somehow able to achieve this, there will be no flagrant constitutional violations. If someone still finds a way to dump its provision, they will not be seen as liberators or heroes but as traitors. There will be no need for legal experts to sit in primetime shows and explain how the constitution has been murdered. The people will find their own way.

Muhammad Hayat Lak
The Writer is a student at the Lahore University of Management Sciences and serving as the Assistant Director of the Law and Politics Society. The views expressed are his own.