From Zia to Bajwa 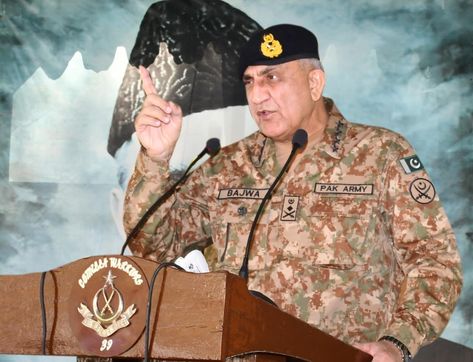 On 5 July 1977 Gen Zia-ul-Haq deposed the elected government of Zulfiqar Ali Bhutto. As required by the Constitution, elections were announced within 90 days. Fearing his safety due to prolonged street protests, ZAB was kept in confinement at the Governor’s House in Murree.

Zia visited the deposed leader before his release, whom he found to be furious and determined to fight back with vengeance. Unsure about his dwindling popularity ZAB arrived at the Lahore Airport to a mammoth welcome by the masses. Along the entire route from the old airport to Shadman Colony where he was staying as a guest of Sadiq Hussain Qureshi, there were a sea of people who wanted to meet the deposed leader. The establishment had grossly miscalculated the popularity of ‘Quaid-e-Awam’.

Zia not only reneged on his promise of holding free and fair elections but also decided to go after the popular leader and his party (PPP). Zia’s misrule stretched for over 11 years (July 1977 to August 1988) in which he damaged all civilian institutions, eliminated ZAB through the judicial process, disfigured the Constitution, created a third-rate political leadership and against national interests decided to join the USA’s proxy war in Afghanistan which has proven to be deadly for the republic.  ‘ Zia’s Dark Ages ‘ continue to haunt the nation till today.

In the 1950s it was Ayub Khan who compromised the sovereignty of the republic while in the 1070s and 1980s it was Zia-ul-Haq. Against the will of his own nation, the usurper served his foreign masters well. When he was finally gone there was a sigh of relief. Benazir Bhutto emerged victorious in the elections that followed in 1988.

On 9 April 2022 a similar event took place in the land of the pure. Imran Khan, the popularly elected Prime Minister of Pakistan was removed through a vote of no-confidence in Parliament but with the support and blessings of the establishment. It was Asif Ali Zardari’s script, the expert in such clandestine operations. In the 180s he had played a key role in saving the first government of his wife Benazir Bhutto; now he was tasked to spearhead the removal of an elected PM. Unfortunately for the establishment it proved to be another misadventure, and Imran’s popularity graph spiralled instead of biting the dust. During his lifetime, Zia never risked free and fair elections. He talked about ‘Positive Results’ . In 1988, the electoral contest took place after his demise, and such a deadlock exists today in 2022.

Zia in 1977 and Bajwa in 2022, there are similarities and differences. Zia had to deal with the popularity of an elected leader for which he had to rely unpopular and corrupt leaders like the Chaudhrys of Gujrat who never wanted elections. Air Marshal Ashgar Khan was misled by the dictator. He was made to belief that free and fair elections would follow after the fall of ZAB but they never took place, thus seriously damaging the political career of the honest and able Air Marshal. Finally he decided to merge his Tehreek-e-Istiqlal with Imran Khan’s Tehreek-e-Insaf after which he retired from politics. He had played a key role in building the Pakistan Air Force  PAF) and Pakistan International Airlines (PIA) but left a very mediocre political legacy.

It is as simple as that. Anyone who violates the Constitution should not go unpunished as it is an agreement between the rulers and the ruled which must be honoured. After the conviction of General Musharraf under Article 6, the ‘ Sword of Damocles  ‘ of Martial Law has been permenantly removed, but the power to usurp and manipulate remains, which has to be checked for democracy and rule of law to flourish.

Like Zia, Bajwa continues to rely on the corrupt-to-the-core politicians who do not desire elections as they stand exposed. In order to prolong his misrule Zia decided to serve his foreign masters by offering his services for their dirty work. The current unpopular dispensation cannot continue unless they decide to follow the previous approach adopted by Zia, the third usurper. Only dirty work of their foreign masters can keep the present regime in power otherwise their collapse in imminent.

As Chief of Army Staff (COAS) Gen Qamar Javed Bajwa is in the last year of his second term which ends in November this year. He has announced that he desires to go home at that time and will not accept any further extensions. Earlier Gen Waheed Kakar had also refused to continue after the expiry of his first term. General Zia never took off his uniform till the last day of his life.

Gen Asif Nawaz Janjaua died while in office. Gen Jahangir Karamat was removed by Nawaz Sharif. Gen Pervez Musharraf only agreed to doff his uniform after he was weakened by the Lawyers’ Movement. Gen Ashfaq Parvez Kiani had two terms in uniform, only Gen Raheel Sharif gave up the position but stepped up to another very lucrative post in Saudi Arabia. Extensions serve no purpose, they only weaken institutions and should be done away with.

Haider Mehdi, the son of the legendary Col. S. G. Mehdi and an ex-soldier himself, has written extensively about the powers enjoyed by the COAS. ZAB, the chief architect of the 1973 constitution, was convinced that Article 6 would end Military Adenturism but it has been repeatedly violated.

Justice Muhammad Munir who founded the ‘Doctrine of Necessity’ wrote an interesting book in his defence under the title of From Ayub to Zia. The higher judiciary has repeatedly failed the nation by siding with the boots against the Constitution. Pervez Musharraf got entangled with the law in his second attempt to usurp power but got away scot-free on the first violation. Then Justice Yakub Ali, the former Chief Justice and father-in-law of Justice Khalil-ur-Rehman Ramday, came up with another approach to contain such misadventures. ‘First disarm and then punish the usurper’.

It is as simple as that. Anyone who violates the Constitution should not go unpunished as it is an agreement between the rulers and the ruled which must be honoured. After the conviction of General Musharraf under Article 6, the ‘ Sword of Damocles ‘ of Martial Law has been permenantly removed, but the power to usurp and manipulate remains, which has to be checked for democracy and rule of law to flourish.

On 14 August 1973, the country achieved the status of a ‘Constitutional Republic ‘ which has been repeatedly violated by those who hold state power. The higher judiciary, despite tall claims of independence, has mostly caved in. The people of the Islamic Republic of Pakistan have suffered at the hands of their own institutions. Despite losses, lessons have not been learnt.

Zia was the first COAS after the promulaation of the 1973 Constitution when the post of chief was redesignated (C-in-C to COAS). As the first desi C-in-C General Ayub Khan faltered, Zia also crossed the line and now it’s General Bajwa holding the fort till November while the nation is demanding free and fair elections ASAP.

Despite his elimination through a questionable court verdict in April 1979, the legacy of ZAB is alive. In the year 2022, IK is the most popular leader who will live on till the republic regains its lost sovereignty compromised by the likes of Generals Ayub, Zia and Musharraf. I am sure General Bajwa will learn from history and follow the likes of Generals Janjua, Karamat and Kakar by keeping away from the legacy of the usurpers.

Facebook
Twitter
Linkedin
WhatsApp
Email
Previous articleOnly One Earth and Pakistan’s initiatives
Next articlePetrol price up by another Rs24, third time in 20 days