One PM initiated work on the device, another exploded it 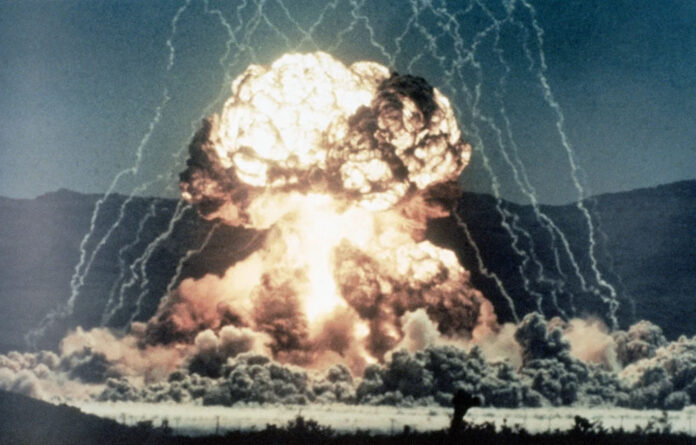 With the continued blessings of Almighty Allah, the living nation is celebrating another Youm-e-Takbir on May 28 (today) in a befitting manner signifying Pakistan’s becoming a nuclear power and thus attaining a strong defence deterrent. It was on 28 May 1998 that Pakistan had become the first nuclear power of the Islamic world and seventh in the world on the whole after the USA, Russian Federation (formerly the USSR), Britain, France, China and India.

Pakistan’s atomic programme, as already mentioned above, was initiated by PPP founding Chairman and elected Prime Minister Zulfikar Ali Bhutto in 1974 and quite successfully brought to culmination by PML-N founder President and Prime Minister Nawaz Sharif on 28 May 1998

This is indeed another anniversary of a great historic development and every Pakistan is quite obviously genuinely proud, irrespective of his/her political affiliations, regional and other petty and vested interests and considerations.

Both India and Pakistan despite being neighbouring nuclear powers are somehow not enjoying cordial relations mainly because of a long unresolved Kashmir issue which India has flagrantly for decades on end refusing to implement   the UN Security Council Resolutions and letting the Kashmiris exercise their right of self-determination.

Despite Pakistan also being a nuclear power, it is showing utmost restraint in the continued prevailing tense circumstances, fully seized  of safeguarding and ensuring  national security and fence. All these years, Pakistan has been telling the world at large  that its nuclear  assets are a minimum defence deterrent and for peaceful purposes and ensuring balance of power in the region as well as that it in safe hands as an effective control and command  system is in place.

A strong defence system coupled with its being  a nuclear power is helping the government in defeating hostile elements and continuing its onward journey on the path of progress, development and prosperity in a determined and committed manner.

It is pertinent to mention here briefly  as to who had  made Pakistan  an atomic power in response to India’s becoming  a nuclear power and continuing aggressive and threatening postures.

India had become 6th nuclear power of world on detonating  an atomic bomb on 18 May 1974 in Pokharan, Rajasthan,  and noticeably there was no reaction or condemnation of any kind  from the world at large.

In all fairness, the atomic programme of Pakistan was initiated by Prime Minister Zulfikar Ali Bhutto in 1974 through  nuclear scientist Dr Abdul Qadeer Khan.

Cutting a long story short,  India had carried out  atomic bomb detonations a second time on 11 and 13 May 1998. Prime Minister Nawaz Sharif who was at the helm of national affairs for a second stint, so as to give a positive and deterrent response to India in this regard, took all important though quite difficult  decision in consultations with all concerned  and Pakistan had carried out atom bomb tests, for which all preparations had already been complete for many years,  test firing five times on 28 May 1998 in Ras Ko  Hills of district Chagai in Balochistan. Test firing a sixth time was  carried out on 30 May 1998.

Pakistan being a responsible atomic power and every succeeding civilian government ensuring foolproof security and safety of the country’s nuclear assets through an effective control and command system, the enemies inimical to the existence of Pakistan are quite effectively being kept at bay from indulging   in any mischievous plans and aggressive postures against Pakistan.

Needless to mention here that a country makes steady progress and development only in a secure and safe atmosphere due to its strong defence system which is helping the government in continuing focusing on all spheres economically as well as socially. It is also generally said and believed that defence of any country and economic development are interrelated with each other. And, this is quite true in the case of our beloved motherland, Pakistan.

Pakistan, being a sovereign independent country and an atomic power also with capability of striking back any foreign aggression, has surely and certainly contributed a great deal towards maintenance of balance of power and ensuring peace  in the region in the face of India’s persistent hegimonic policies and  forcible illegal  occupation of the internationally recognized disputed territory of Jammu and Kashmir.

Pakistan’s atomic programme, as already mentioned above, was initiated by PPP founding Chairman and elected Prime Minister Zulfikar Ali Bhutto in 1974   and quite successfully brought to culmination by PML-N founder President and Prime Minister Nawaz Sharif on May 28,1998.

Former Prime Minister Nawaz Sharif is in London from where he has directed the party leadership and workers to celebrate Youm-e-Takbir as usually quite enthusiastically on May 28, 2022. Accordingly, PML(N) led coalition government headed by Prime Minister Shehbaz Sharif is celebrating the great national  event of Pakistan becoming  a nuclear power in a befitting and colourful manner.

The Pakistani nation  will continue celebrating Youm-e-Takbir enthusiastically every year on May 28 as long as Pakistan exists on the world map.

The writer can  be reached at [email protected]