Heading towards a collapse

The nation will suffer because the parties are stubborn 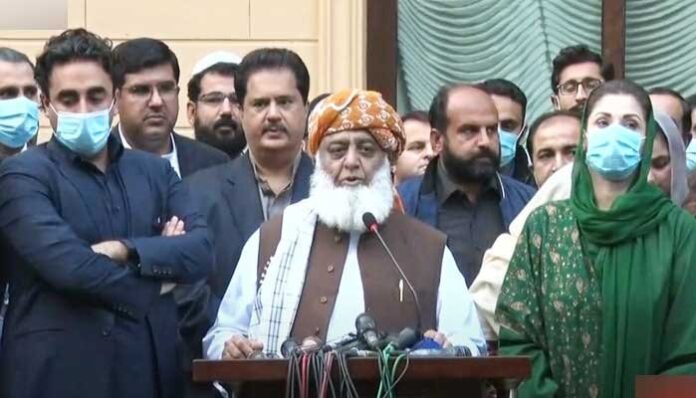 Let us leave this for a moment how correct Imran Khan is when he refers to his removal from the office as a result of a foreign conspiracy hatched against him and his government by a foreign country as a response to his “Absolutely not”, and when he says the PDM government is backed by a foreign power.

Imran Khan, whose popularity was at the lowest level of his political career, without any doubt, has suddenly got his spark and charisma back. People are buying his stance and his popularity has reached its peak.

What has been observed about the supporters of the PTI from previous years is that like supporters of other political parties they were enthusiastic, energetic and animated but lacked determination, devotion, sacrifice and obstinacy. The characteristics one can expect from the supporters of religious parties.

The reason is that they feel that they are fighting a battle for freedom under the command of their leader. It is the current fervour, craze, zeal and devotion of Imran Khan fans that can bring the PTI to power again, many analysts anticipate.

But, unfortunately, both sides are not willing to take a step back. As a result, time is running out of hand with each passing day and the whole system is sliding downwards rather hastily.

And, to keep the morale of the supporters high Imran Khan has to be in public. For this purpose, the ex-Prime Minister is on a mission to address 14 public gatherings in only 2 weeks.

The anti-government campaign will reach its peak with the call for Islamabad March after 20th May. PTI Aims to bring two million people to Islamabad, block major cities and fight for freedom.

Two million is a huge figure and it will take PTI a lot of effort to take out this many people. But if PTI manages to bring only 200,000 people to Islamabad, it will create problems for the government.

The only option acceptable to PTI is fresh elections and nothing seems to stop them right now.

Shahbaz Sharif, in an unexpected turn of events, has got the Premiership of the country. His son is the chief minister of Punjab. So, the father-son duo would never want early elections.

An initial couple of weeks of the coalition government has failed to create any major impact. The story till now is rather an old one. The PM and his cabinet are making people realise they are now rectifying the policies of the previous government and taking the country out of the mess created by the previous government. But, the Pakistani rupee has hit an all-time low and prices of the goods are increasing. So there is no change in the economic condition of the country.

However, the battle with PTI has continued. The PML(N) has also decided to go public. The recent string of rallies announced is one example. Similarly, other coalition parties are also mulling over public gatherings to show their strength. The verbal attacks and abuses from both sides are a routine matter though.

The polarization has reached a level where it will take years for things to normalize. The role of state institutions and attacks on them in public gatherings is compromising their sanctity day by day.

The chaos and uncertainty over what will happen or what will be the outcome of this political unrest has taken over every sane mind.

What happened in Sri Lanka recently serves as a lesson to Pakistan. Things can go out of hand quickly if they are not controlled in time.

One side wants early elections and the other side wants to prolong its rule. But, if fresh elections are not announced, for how long can this political crisis continue?

Imagine two million people in Islamabad with the Capital blocked, all major cities choked, Government and its machinery trying to disperse the masses. With both the government and PTI stuck with their preferences, with no one ready to take a step back, who will be at a loss? Only Pakistan and the people of Pakistan will suffer.

With no one holding back, everyone should understand that nothing is above the state. Be it politicians, political parties or institutions all exist because of the state.

Currently, we are standing at a point where any miscalculation can result in a big loss.

An independent investigation was all that was needed to avoid all this mess. It would have revealed the truth and ended speculations.

But, that is not the case. The PDM government and PTI leadership are fighting and abusing and polarization is increasing. And, no clear future is in sight. Unless both sides bow down and hold back for the state.

But, unfortunately, both sides are not willing to take a step back. As a result, time is running out of hand with each passing day and the whole system is sliding downwards rather hastily.

January 29, 2023
Fawad ‘Nelson’ Chaudhry has changed his name after arrest. He has renamed himself after Nelson Mandela. Fawad, or rather Nelson, is also struggling against...

PML-N is not afraid of election: Talal