How can the courts keep quiet?

Imran faces a plethora of cases 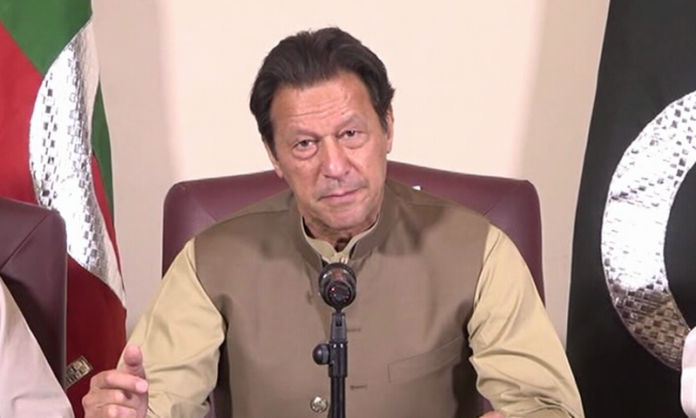 The apparent decision of the federal government to institute cases under Article 6 of the Constitution raises perhaps more dust than it settles, and forces the whole nation to confront some of the problems that exist in the drafting of the Constitution, apart from indicating the ways in the present crisis where the Constitution was violated.

The fact of the violation is perhaps the best place to begin. The whole idea of a constitution is that it cannot be violated. The most blatant example was the Deputy Speaker’s ruling that the motion of no-confidence, instead of being voted upon, was dismissed. The Constitution is clear; once such motion comes before the House, it can only be disposed of by a vote. If there is a problem with the motion, it should not have been admitted.

However Deputy Speaker Qasim Suri thought that the motion could be disposed of by being ruled out of order at that stage. He interpreted the Constitution to reach that conclusion. A full bench of the Supreme Court took suo motu notice of the matter, and reached a different interpretation of the Constitution, ruled that the Deputy Speaker’s ruling was illegal, and the rest is history.

The prosecution would rest on the premise that the Deputy Speaker was attempting to subvert, even to suspend it, the Constitution (surely there is no one willing even to argue that there was any attempt to abrogate). While disobedience of the Constitution points in that direction, prosecution would also have to show that he had the intention of preventing it from operatIng.

Similarly, Punjab Governor Umar Sarfraz Cheema is thought to have been guilty of an offence under Article 6 because of his refusal to administer the oath of office to Hamza Shehbaz. It is true that the Constitution does not contemplate a situation in which the Governor of a province could refuse to swear in a duly elected Chief Minister. But is that refusal to obey the Constitution a subversion of it?

The same applies to the President. His refusal to act promptly on the advice of the Prime Minister may be a violation of the Constitution, but in itself cannot be construed as an offence of subversion, suspension or abrogation.

The debate should perhaps look at the Constitution itself. It is not a matter of the Deputy Speaker having been right or wrong, but why the Constitution does not provide for foreign interference or conspiracies.

However, one of the issues with that was that General Musharraf was tried alone, even though the coup could not have occurred without the active participation of a large number of other officers, some of high rank, and men. However, one effect seems to have been that there has been no military coup since, but a hybrid regime was introduced, where both the major political parties were sidelined, and the path to power for the PTI was ensured.

The take-no-prisoners attitude of the PTI towards the Constitution meant that friction was caused between the three pillars of state. The judiciary, in the shape of the Supreme Court for the Deputy Speaker and the President, and the Lahore High Court for the Punjab Governor, found itself forced to tear down those walls which were supposed to exist between the Judiciary, the Legislative and the Executive. However, the courts concerned were also aware of their duty to interpret the Constitution.

If one of the other two branches misinterprets the Constitution, is the Judiciary supposed to shrug its collective shoulders and do nothing? It must be remembered that, of the three, the judiciary is the only one independent of the others. In a Parliamentary system, the Executive is given to whoever controls the Lower House of Legislature. If the Executive loses its majority in the Legislature, it is ousted.

Of course, when martial law is imposed, the head of the army (and calling him Chief of Army Staff instead of Commander-in-Chief of the Army didn’t help) gathers legislative and executive powers into his hands, by virtue of being able to do so, without any constitutional provision allowing him to do so. The ability of a COAS to have his orders obeyed is the reason he has the potential to stage coups.

However, the COAS’ ability to obtain the reins of government without having a majority in the National Assembly seemed to have been attempted to be imitated by Imran Khan, who no longer had a majority in the National Assembly. That there should be a new Assembly (as a result of fresh elections) is a demand by the PTI, but there was the episode of the Supreme Court ordering the Speaker what to do. The Legislature is free of interference, and the jurisdiction of the courts has been specifically ousted. True, that is for proceedings, to avoid members appealing the Speaker’s rulings on such matters as who was to have the floor, or in any way giving any court appellate jurisdiction over the Speaker. Unfortunately, that has now happened, and even if the courts reject as inadmissible, they are still likely to face a number of petitions asking that the Speaker’s ruling be reversed because it violates the Constitution.

However, one area in which The Supreme Court oversees the Legislature is in its ability to strike down any law it has passed, or portion thereof. Similarly, it is constantly giving instructions to federal and provincial governments to act according to the courts’ interpretation of the law, not its own. This has led it to examine actions by the Executive and decide whether they are legal or not. Judgments may contain passages where the executive has been asked to keep the courts out of disputes, especially asking politicians not to get political disputes settled by courts, but judges have not shrunk from overseeing executive actions whenever there is a doubt about their constitutionality.

Because of this, while the courts may find legislators turning to it, there would be no surge in petitions challenging executive actions. However, it perhaps cannot be over-emphasized that there was no real way the courts could have refused to do what theory did. If a constitutional official, whether by reason of sudden insanity or misplaced loyalty to a party rather than his or her oath of office, acts contrary to the Constitution (and not just potentially, but clearly and blatantly), how can the courts refuse to intervene?

The debate should perhaps look at the Constitution itself. It is not a matter of the Deputy Speaker having been right or wrong, but why the Constitution does not provide for foreign interference or conspiracies.

However, the Constitution is the least of Imran’s worries. First is the Medina incident, and there he already finds himself embroiled in litigation. Then there is the toshakhana case. Then there are the alleged misdeeds of Ms Farhat Shehzadi aka ‘Gogi’. But before any of these, he must negotiate the shoals of Article 6.