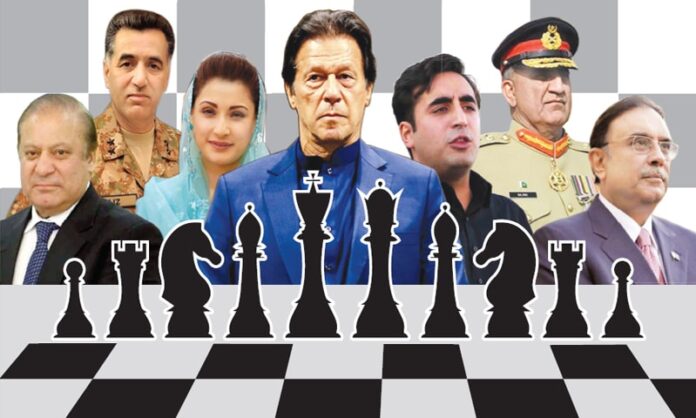 The narrative that PTI chief Imran Khan is selling with success, that his ouster as PM was because of a conspiracy by the USA, is doubly dangerous for the establishment because it challenges its role as the knight in shining armor, which has allowed to portray itself, indeed think of itself, as the country’s defence against not just external enemies, like India, but internal, like politicians, who are by definition dirty and corrupt.

Imran is the third political leader to have achieved power, but to have been removed from office. The first was Zulfiqar Ali Bhutto. His arrival was messy, as Pakistan was riven in two, and his departure was messy, in the 1977 coup. He had been cultivated by Ayub Khan whose Foreign Minister he became. Nawaz Sharif was cultivated by Zia ul Haq, in whose lifetime he served as Punjab Finance Minister and Chief Minister. He later became Prime Minister, but ended up sacked by the President Ghulam Ishaq Khan, an establishment figure if there ever was one.

The myth is that the military is involved in politics. Most people are not. However, there are three intrusions. The first is the fact that everyone has civilian family members (though military families have developed, which have intermarried, and where only the wives are civilians). Then senior officers interact with civilian officials. Finally, the COAS is held responsible by the Army to play a political role. Most of his advisers are fellow officers, and they keep themselves up to date. Most crucially, some officers, at various ranks, and belonging to all three services, go into the ISI, and find themselves having to play a political role.

Imran has got to explain to himself what went wrong, Mian Shehbaz Sharif has got to address the problems of the country, and the military has got to find an explanation for why those it chooses turn against it. There is the PPP narrative, the PML(N) narrative, and now the PTI narrative, all of which postulate that the establishment (the military and the judiciary) is under the thumb of the USA, and change regimes to suit US interests. Anyone defying them is destroyed; Zulfiqar Ali Bhutto and Imran Khan being the prime examples. Nawaz Sharif, who actually exploded the nuclear weapon, has to be included.

The problem for the military leadership is that this narrative seems to have made its way into the military. Some of the pro-Imran posts have tended to mutiny. The clash between a serving officer and a PML (N) MPA’s staff has brought in the COAS. Earlier, the formation commanders conference had to be held to condemn the attempts to divide the military. Though it was an institutional decision that had the military turn neutral, the habit of supporting the PTI could not be reversed, and the sentiment that the PTI should be supported (‘have its nappies changed’, in Ch Pervez Elahi’s pungent phrase) remained.

The new government will worsen that divide if it tries to hold its predecessor accountable, but also if it doesn’t. Imran shows no sign of dialing back the rhetoric in the interest of the country.

There is an ethos among armed forces around the world that politicians are scoundrels. However, most armed forces do not take over, even if they can. They go on obeying the orders passed down by those scoundrels, provided that they have been duly elected, and are passing legal orders. However, the Pakistan Army has learnt that something can be done about the scoundrels. In the last decade or so, and culminating in the 2018 election, military men learned that Imran was not a scoundrel. That has led to the present situation, where senior retired officers whose purported messages of condemnation of the military leadership have gone viral, have had to scramble to deny they had said anything of the sort.

One of the great boons of a constitution, any constitution, is that it provides for the peaceful transfer of power. If that breaks down, then the constitution loses its utility. The question of conspiracy by a foreign power comes afterwards. The conspiracy, if carried out by constitutional means, reflects the constitution’s lack of robustness. One is reminded of Spanish conquistadores capturing the Aztec Empire of Mexico, and the Inca Empire of South America because they captured the respective monarchs, Montezuma and Atualpa.

It should be noted that the establishment seems to be sitting pretty. One set of same-pagers has been replaced by another set. It should be clear that the new government consists of parties which want to be on the same page. That government should be a hopeful sign for Imran, a sign that it is possible to get back on the same page after once having fallen off it.

However, this is something of an embarrassment of riches for the establishment. It is not going to be easy to keep all elements happy, and it seems the establishment has a harder task than Shehbaz Sharif, who has got a coalition to manage, which does not consist of one large party and a number of allies, but two large parties and the allies. That these parties will oppose each other in the general election adds to the complexity of his task. That task includes doing what Imran could not do: repairing the economy while protecting certain budgets.

One of the more closely watched aspects of the foreign conspiracy theory is that of benefit. Apart from the absence of any motive apart from the visit to Ukraine, the Shehbaz government has given the USA no benefit, such as the bases Imran prides himself on refusing. On the other hand, while China has not benefited yet, Shehbaz has made a very public commitment to the CPEC projects, which indicates that the Khan government had been at fault.

If anything, this commitment to CPEC is probably more anti-US than going to Moscow on the day it invaded Ukraine. Pakistan is trying to avoid plumping for either side in the developing Sino-US confrontation, especially since India is so clearly on the US side.

Another query that has been raised is of the possibility that US authorities might demand Imran’s extradition in connection with the case of Arif Naqvi, the head of the former Abraaj Group, extradited from the UK in connection with the financial crimes he is accused of.  An extradition request will not come as a shock to PTI supporters, but merely as further proof that the USA conspired against their hero.

The first casualty of war, it has been famously said, is the truth. By that standard, Pakistan is at war within itself. One result of Imran’s ouster has been that the country has been divided, perhaps even more than his rule divided them. This has extended to people tigerishly defending egregious and even unconstitutional behaviour. The new government will worsen that divide if it tries to hold its predecessor accountable, but also if it doesn’t. Imran shows no sign of dialing back the rhetoric in the interest of the country.