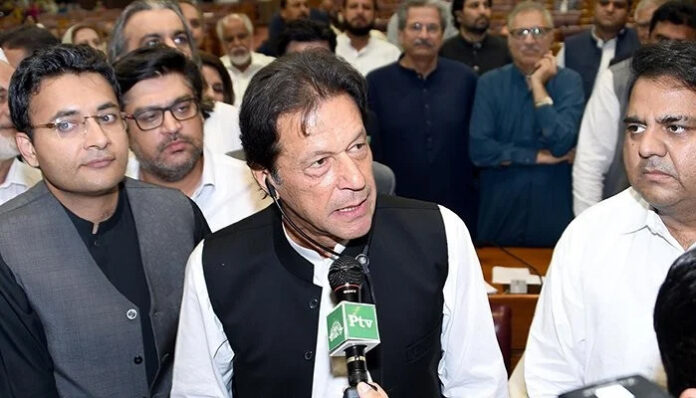 Cricket is a gentleman’s game where players are rated on their performances and sportsmanship. A cricketer gets cheered by thousands of spectators when he bowls out the stumps or pulls the bat to a wide angle and hits the ball out of the boundary. It’s all about performance and grace that lasts long in cricket. There are some basic rules and etiquettes in cricket regardless of the passion and aggression involved in it. If a batsman gets out he walks away towards the pavilion gracefully without any hue and cry.

An umpire plays a vital role in the match, and his decisions are to be accepted by everyone because of his neutrality. Recently there has been excessive usage of cricket analogies in Pakistan’s politics like neutral umpire, wicket, pitch, kaptaan, and so on.

This culture started when a former cricketer, Imran Khan, entered politics and often used the above mentioned cricket analogies. Imran always portrayed himself as a mentor to his juniors and contemporaries, but the reality has been quite different. The Kaptaan’s first victim in cricket was his own mentor (and first cousin) Majid Khan, whom he axed from his team the day he became captain just like he axed Jehangir Tareen from his party the day he became Prime Minister.

Seems like it will be impossible for Imran Eleven to cross the 172 score while the Opposition Eleven is sure enough to put up 200-plus on the scoreboard. Perhaps, looking at the weak body language of kaptaan and smart play by the opposition. It has become evident that the game is over for kaptaan and the only way left for him is to accept his defeat and move on without creating any further embarrassment for himself

In cricket his biggest support was Javed Miandad who used to take the pressure off each time the team was in crisis and was a match winner but Imran Khan made sure that Miandad didn’t complete his triple century and declared the inning when Miandad was well set at 280 runs on the scoreboard in 1983 at Hyderabad,. Miandad who could’ve easily scored a triple century (300 runs) had to walk back to the pavilion because he was playing under an insecure captain who couldn’t digest the record of his own team player.

Even in 1980 Imran conspired a revolt against young captain Miandad which resulted in turmoil. He even made sure that Miandad was dropped for the 1992 World Cup tournament but later had to include him. Miandad gave a stellar performance in the semifinal and final which ultimately resulted in a victory for Team Green in the World Cup. Actually it was a team effort but Imran tried to capture all the credit in his victory speech which depicts his self-centeredness and arrogance from his cricket days.

Even after Kaptaan’s retirement his cronies treated Miandad, a legend, very badly and made sure he did not sustain the captaincy for long.

Imran brought personal likes and dislikes in sports and is doing the same in politics today; his criteria for merit has always been a pressurized and scared team where he could easily dictate  and manipulate things in his favour. Here in politics he never let any one from his party (PTI) to reach to his level because deep down he has never been a democrat. Be it Tareen, Shah Mehmood, Asad Umar, Pervez Khattak, all the possible alternatives of kaptaan  were sidelined but kaptaan himself. At one place Imran was hellbent to make a mediocre player Mansoor Akhtar a Don Bradman and on other hand he destroyed the charismatic Qasim Umer’s career. Just like since past four years he has been rigid to keep the dull Bozdar as CM Punjab and portray him as Waseem Akram Plus, which was however an insult for the legendary fast bowler Akram, and on the hand ruined the career of Tareen. But later it became obvious that kaptaan wanted a weak CM who could obey his orders without even blinking an eye.

Sarfaraz Nawaz the pioneer of reverse swing  who bagged seven wickets for a run against Australia on its home ground of Melbourne. He.was a remarkable bowler and asset of Pakistan cricket team but even he was not spared. Imran learnt reverse swing from Sarfaraz but later made him an example of his envy just like he did with many in his own political party, showing the ruthless nature of the despotic kaptaan from his cricket days.

Currently, the match between Imran Eleven and Opposition Eleven has entered into the final over; with neutral umpires, few wickets in hand and spectators being disappointed at kaptaan’s performance. The experts predict that he will be defeated with a huge margin as his own players have lost confidence in him due to his weak captaincy and are willing to play from the opposite side.

Kaptaan is facing these consequences today because he entered the pitch without any plan; his arrogance and overconfidence landed him in hot water. This time the Opposition Eleven is in form and looks confident. The nonstop yorkers and bouncers are becoming difficult for kaptaan to face, he is missing the shots. Seems like it will be impossible for Imran Eleven to cross the 172 score while the Opposition Eleven is sure enough to put up 200-plus on the scoreboard. Perhaps, looking at the weak body language of kaptaan and smart play by the opposition. It has become evident that the game is over for kaptaan and the only way left for him is to accept his defeat and move on without creating any further embarrassment for himself.

The writer is a columnist and member PPP, and tweets @MustafaBaloch_