The country approaches a seminal anniversary 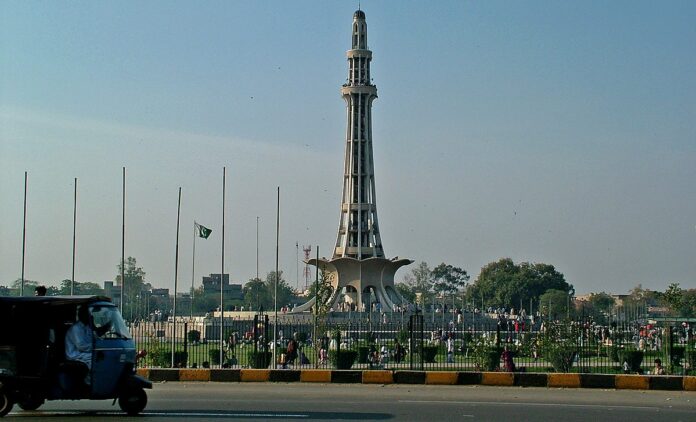 Minar-i-Pakistan, is standing aloft in the Iqbal Park, formerly Minto Park, across the road from the historic and majestic Badshahi Masjid and the Fort in the city of Lahore, symbolizing   the spirit and struggle launched by the Muslims under inspiring and principled leadership of Quaid-i-Azam Muhammad Ali Jinnah for the creation of a separate homeland.

The concept of a separate homeland for the Muslims, presented by the great thinker and poet Allama Mohammad Iqbal in the 1930s, was reduced in black and white at the historical session of the All India Muslim League presided over by the Quaid-i-Azam at the then Minto Park on 22-24 March 1940, and the dream so visualized was translated into reality within the short span of just seven years.

Minar-i-Pakistan has been erected to commemorate as well as pay tributes to the Muslims; men, women and their children; who struggled and sacrificed their lives for its creation at the same place where the Resolution was presented and adopted way back in 1940, on March 23. To mark the great historical event and subsequently its implementation in the form of an independent and free Pakistan, March 23 has since been declared as Pakistan Day and is celebrated by the people every year quite befittingly and enthusiastically  through meetings , seminars and rallies  topped by a  quite impressive and important parade at Islamabad  wherein  all three armed forces of Pakistan, the Army, Air Force and Navy  demonstrate their  strength and determination to safeguard and secure the nation’s freedom , security and solidarity at all costs.

A visit to the Minar-i-Pakistan  any time and day throughout the year particularly  in March,  obviously  rekindles the spirit of sacrifice and  struggle,  and revives  the determination for continuing to work hard  and still harder for realizing the cherished objectives  for which the Resolution was adopted and a free, sovereign and independent  state of Pakistan  was carved out on the world map  out of nowhere for existence for centuries together with the continued  blessings of the Almighty.

Only a visit to the Minar-i-Pakistan   clears certain things and ambiguities. Generally, the Resolution adopted on 23 March 1940 is taken into consideration in the context of Pakistan Day celebrations every year on this historically important date. The clarifications   made in the original Resolution for removing the certain misgivings and misconceptions through the Delhi Resolution some six years later are somehow little known and hardly read with the 23 March 1940 original resolution.

To duly appreciate and understand the true spirit and objective of the original 23 March resolution and the amending 9 April 1946 Delhi Resolution   clarifications should be read together. Both the texts of March 23 Resolution and the operative part of April 9 Resolution are inscribed on the Minar-i-Pakistan quite prominently which no visitor can ever miss to notice, read and understand and also to make some pledges under the tall Minar-i-Pakistan as a determined and committed Pakistani.

It is imperative that the Pakistan Resolution, also known as the Lahore Resolution, and of the operative part containing some clarifications of the Delhi Resolution are reproduced here for the benefits and information of everyone and in particular for the younger generations who mostly need to know the background of the creation of Pakistan before being swayed away by some other worldly attractions and interests.

Pakistan Day is celebrated quite enthusiastically every year on March 23. To mark the great occasion, a large number of the people from all segments of the society particularly the youth visit the Minar-i-Pakistan and revive the spirit of Pakistan Day pledging to continue their efforts for building a strong, united, progressive and prosperous Pakistan by working selflessly and untiringly keeping in mind that this motherland belongs to all of us irrespective of political and other affiliations and considerations whatsoever.

Indeed March 23 has assumed a unique significance and importance in the annals of the history as a red letter day, it was on this day way back in 1940 that the Muslims of the sub-continent had formally resolved to struggle and achieve a separate homeland of their own Pakistan where they could live freely and independently, perform their religious duties and obligations and also be economically their own master. The Lahore Resolution, as it is known, was surely a semblance of the aspirations of the Muslims of the sub-continent.

As stated above already, the Pakistan Resolution of March 23, 1940 was further clarified by a resolution unanimously passed by the Muslim League Convention   held under the presidentship of the Quaid-i-Azam at Delhi on April 9,1946.

Among other things, the said Resolution also specified that:

“The zones comprising Bengal and Assam in the North-East and Punjab, North-West province, Sind and Balochistan in the North-West of India, namely Pakistan Zones, where the Muslims are in a dominant majority, be constituted into a sovereign independent State and that on unequivocal undertaking be given to implement the establishment of Pakistan without delay”.

If both the resolutions in the context of their operative parts are read together, many things would become clear in the minds of the people in respect of creation of an independent, sovereign State of Pakistan.

The resolution so adopted unanimously was moved by Chief Minister of the undivided Bengal A.K. Fazlul Haq, and was seconded by Ch Khaliquzzaman from the United Provinces. Zafar Ali Khan from Punjab, Sardar Aurangzeb from North Western Frontier Province (NWFP) and Sir Abdullah Haroon from Sindh, Qazi M.Essa from Balochistan and other leaders announced their support.

Construction of Minar-i-Pakistan itself makes an interesting reading. But the story would be narrated some other time. It was started as the Pakistan Day Memorial, Its foundation stone was laid on 23 March 1960 by the   then West Pakistan Governor Akhtar Hussain while actual construction got underway sometime in 1964. The tower construction was completed on 22 March 1968 but it was never formally inaugurated by anyone.

The credit for construction of Minar-i-Pakistan, designed by architect and engineer Nasreddin Murat-Khan hailing from Daughestan,  goes to  contractor Mian Abdul Khaliq and then  Commissioner Lahore and well-known literary figure Mukhtar Masood  who had got its file recovered from the heaps dumped in the storeroom of the office of one of the Assistant Commissioners. Both Mian Abdul Khaliq and Mukhtar Masood have expired over the years.

It is also pertinent to mention here that no material used in the construction of Minar-e-Pakistan was imported from anywhere. All material was procured and collected by the contractor from different parts of the country itself. As such the Minar-e- Pakistan can easily be called a living symbol of national integration and solidarity also.

The Minar was erected under the guidance of the Pakistan Day Memorial Committee which remained intact till it was taken over by the Lahore Development Authority in May 1982.

Pakistan Day is celebrated quite enthusiastically every year on March 23. To mark the great occasion, a large number of the people from all segments of the society particularly the youth visit the Minar-i-Pakistan and revive the spirit of Pakistan Day pledging to continue their efforts for building a strong, united, progressive and prosperous Pakistan by working selflessly and untiringly keeping in mind that this motherland belongs to all of us irrespective of political and other affiliations and considerations whatsoever.