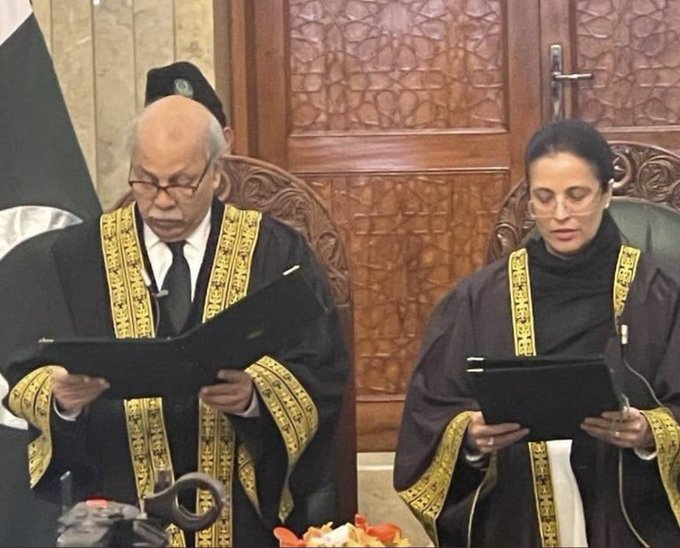 Justice Ayesha Malik was sworn in as Pakistan’s first female Supreme Court judge on Monday, which was a landmark occasion in a country where activists say the law is often wielded against women.

“It is history in the making for Pakistan’s judiciary.”

It is pertinent to note that Justice Malik attended a ceremony in Islamabad where she now sits on the bench alongside 16 male colleagues at the apex court.

Justice Malik was educated at Harvard University and served as a high court judge in Lahore for the past two decades.

She has been credited with rolling back patriarchal legal mores in Punjab.

Last year she outlawed a deeply invasive and medically discredited examination used to determine a woman’s level of sexual experience.

Women in Pakistan often struggle to gain justice in rape and sexual assault cases, and the test was deployed as a means of discrediting victims by casting aspersion on their character.

Justice Malik’s elevation to the apex court of Pakistan may clear the way for more women to enter the historically conservative and male-dominated judiciary.

“She has broken all barriers in the judicial system and it will allow other women in the system to move forward,” said lawyer and women’s rights activist Khadija Siddiqi.

“I hope this will lead to more women-centric decisions by the judiciary in the future.”

Prime Minister Imran Khan congratulated Justice Malik and wished her all the best.

Lawmakers across the political spectrum as well as journalists rejoiced, sharing pictures and videos of the oath-taking ceremony and terming it “historic” and “inspirational”.

Information Minister Fawad Chaudhry, while sharing a shot from the ceremony, said the picture was powerful and symbolised women’s empowerment in the country. “I hope she will be an asset to our judicial hierarchy … Congratulations #JusticeAyeshaMalik, a landmark elevation,” he tweeted.

Science and Technology Minister Shibli Faraz too termed it an inspirational moment.

Similar sentiments were shared by Parliamentary Secretary for Law Maleeka Bokhari who exhorted all girls watching, “BELIEVE in yourself – Follow your DREAMS- REPEAT after me- NOTHING is IMPOSSIBLE!”

PPP Vice President Sherry Rehman congratulated the newly appointed judge, sharing a picture of the ceremony with the caption: “This is a picture full of promise and hope for the wonderful, talented, bright, courageous young women of Pakistan! Follow your dreams, be the change.”

“Justice Ayesha Malik takes oath as the first ever woman judge of Pakistan’s Supreme Court. Also a symbol of how women’s struggles over the past four decades have pushed back patriarchal structures and gender stereotypes. Long way to go but small victories matter,” wrote journalist Raza Rumi.

Journalist Amber Rahim Shamsi too welcomed the news, saying it was a good start to Monday.

By Saad Imtiaz Disabilities, by definition, are abstract. Some are noticeable, others are less in this way, yet both are unequivocally legitimate. Do you recall whenever...
Read more
Uncategorized

Letter: Request to open a new school in the area

Dear sir, It is submitted to the government, through your esteemed newspaper, that the area in which I live, is far away from the main...
Read more
Uncategorized

It's not a cliche to say that Cemo Basen is on top of his game with his self-titled debut album. He released seven singles...
Read more
Uncategorized

Imagine a young woman who has a passion for making short films. She wants to use her films to bring awareness to social issues...
Read more
- Advertisment -