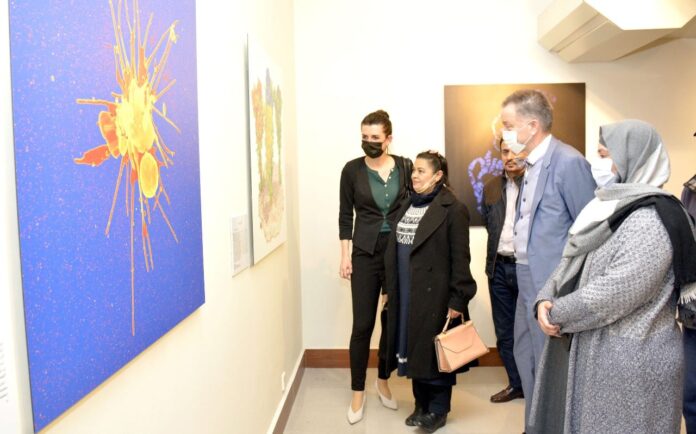 ISLAMABAD: An exhibition featuring spectacular photographs revealing the forms, patterns and structures of science went on display recently at the Pakistan National Council of the Arts (PNCA).

The German Embassy in collaboration with the Pakistan National Council of the Arts (PNCA) organized the exhibition, which will conclude on January 23.

The 22 large-format photographs featured at the show titled Images of Science have been captured on camera using both conventional and modern techniques by several scientists including Dr Asifa Akhtar, a native of Karachi, and the director at the Max Planck Institute for Immunobiology and Epigentics.

heart measures only half a millimetre and consists of just one atrium and one ventricle.

A detailed explanation of context and study accompanied each of the photographs, giving visitors insight into what they were seeing whether it was plasma and magnetic movements or atoms. With Covid-19 standard operating procedures (SOPs) in place, the exhibition is open to visitors till Jan 23.

Providing a glimpse into the universe, the Portrait of a Black Hole is the result of a worldwide collaboration to photograph a black hole, where scientists combined eight high-resolution radio telescopes to form the virtual event horizon telescope. Signals from the individual antennas were used to calculate the image of a particularly supermassive black hole in the centre of M-87, a giant elliptical galaxy in the Virgo cluster.

Keeping the pandemic in mind, three images related to biology and medicine also stood out.

The Spikes of the Crown shows characteristic protein structures that the coronavirus has become known for. The image shows that the stalk of the spike structure is surprisingly flexible. Caught in the Net shows the Shigella bacteria being caught in a net cast by neutrophils or the white blood corpuscles that are central to our immune system. The Immune System at Work shows a white blood corpuscle in the process of disarming tuberculosis bacteria.

Photographs, depicting iridescent feathers threatened by insects to a mosaic of Neptune on a shell from the Fonte Doria in Genoa were juxtaposed with studies of powdery mildew forming a filamentous network or mycelium on the leaves of mouse-ear cress and an image of a normally developed heart of a 48-hour-old zebra fish embryo, dyed using fluorescent proteins. The much-magnified

Speaking on the occasion, German Ambassador Bernhard Schlagheck said: “As you know we have celebrated 70 years of diplomatic relations between Germany and Pakistan last year and this exhibition used to be at the front of the Lahore neck of our festivities”.

The Ambassador said it was astonishing how well received and successful this exhibition was in Lahore.

“We thought it was a good idea to bring it to Islamabad in order to give people in the city the opportunity to see it as well. The 22 images display natural phenomena made visible through techniques by German researchers,” he concluded.