The inhuman incident of Sialkot 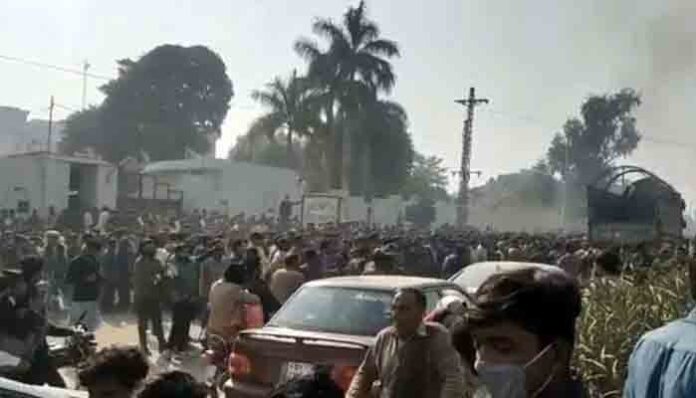 There are moments in the histories of nations when they stop, look back at the past and reflect. These moments have the capacity to define nations. The Sialkot incident is one such incident in the history of Pakistan.

I consider myself the biggest lover of the Holy Prophet (PBUH) and I can proudly say that I cannot think of hurting or harming anyone in His name because of his teachings, character, and love for humanity.

A prophet who is the messenger of peace would never allow anyone to kill anyone in His name.

The Sialkot mob lynching is as brutal, as inhumane as it gets.

I belong to the religion Islam which teaches “Whosoever kills a person, it shall be as if he has killed all mankind” Al-Quran [5:32].

But, I fear I will never be able to explain and convince the victim’s family or other people belonging to the same community that I am not the same who killed your beloved one and I belong to a religion that teaches tolerance, peace and humanity.

But, a mob or small section of fanatics can and should not define me, my religion or the majority of people living in Pakistan who think the same.

The love for the Holy Prophet PBUH cannot give rise to fanaticism, hate or barbarity; it teaches love, compassion, kindness and forgiveness.

The Sialkot mob lynching has not only brought shame to people living in Pakistan but to Pakistanis living abroad as well. A group of fanatics has tarnished Pakistan’s image and disgraced the religion.

But now rather than repenting of what had happened, Pakistan must impose severe punishment on those involved in this violent act and not let a small fraction of fanatics define the whole nation.

What happened in Sialkot was against the teachings of Islam, the Quran and the Holy Character of the Prophet (PBUH).

Pakistan has a government, a Judicial system, LEAs and laws to govern people. No one is above the law or allowed to take the law into one’s hand. But when an event like Sialkot happens it challenges the writ of the state.  Because of this, all other people feel insecure and vulnerable. So the state needs to keep people’s faith in the system and maintain the writ of the state by bringing perpetrators of these horrific incidents to justice.

Different cultures exist in Pakistan and all cultures encourage the treatment of a guest in the best possible way. The deceased Sri Lankan national was our guest and the way he was treated has put us to shame.

Those who misguide people in the name of blasphemy should also tell the merciful, forgiving humanitarian, forbearing and magnanimous aspect of the Holy Prophet (PBUH) life.

The document reads as: ” This is a message from Muhammad ibn Abdullah, as a covenant to those who adopt Christianity, near and far, we are with them. Verily I, the servants, the helpers, and my followers defend them because Christians are my citizens; and by Allah! I hold out against anything that displeases them…No one is to destroy a house of their religion, to damage it, or to carry anything from it to the Muslims’ houses. Should anyone take any of these, he would spoil God’s covenant and disobey his prophet…No one of the nation is to disobey the covenant till the Last Day (end of the world)”.

Then how can we expect a true lover of the Holy Prophet PBUH to harm or injure anyone of any other religion?

The loss and damage it has done cannot be reverted but surely this has to be the point from where no more violence is perpetrated in the name of blasphemy and fanatical tendencies have to be controlled.

The love and respect of the Holy Prophet PBUH are above all. According to a Hadith, “None of you will have faith till he loves me more than his father, his children and all mankind”.

But, killing someone in the sacred name of the Holy Prophet (PBUH) whose mercifulness, forgiveness and benevolence is universal is not acceptable. As a Muslim, I have zero tolerance in respect of the prestige of my Holy Prophet (PBUH). But if someone disrespects the Holy Prophet (PBUH), we should deal with him/her according to the rules and regulations of Islam. We have a constitution, judicial system, and laws. Let the state decide its fate and punish him according to law. Nobody has the right to decide by himself.

The shameful incident of Sialkot is the murder of our religious, constitutional, judicial, social and cultural values. It is the murder of human values. This ugly incident has isolated our country from the international community. It has defamed the most peaceful, kind, merciful, and beneficial religion, Islam. How can we claim that we are civilised and are the followers of the most civilised, peaceful and merciful religion and prophet (PBUH)?

We should realise it has not happened suddenly. It is the failure of our whole system. We are all responsible for it. Unfortunately as a society, we have not educated and trained our young generation according to the real teachings of Islam. From the early 80s onwards, in the name of religion, we have cultivated a culture of intolerance in our society. Now we can observe that intolerance in all fields of life.

Now we are living in an ignorant society. The Society neither has a temperament of dialogue nor capability of tolerance.

It is time to rethink and reconsider our attitudes, conducts and behaviours. Otherwise, we will be at the receiving end in future.

Lastly, in a mob of extremists, there were only two lovers of the Holy Prophet (PBUH) who tried to save the victim and they are a symbol of hope and life in our society.