The west can’t avoid the humanitarian crisis in Afghanistan

Just as Africa was starved, so will Afghanistan be 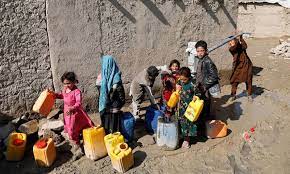 As winter approaches, Afghans are increasingly worried about food. Prices of essential food items are skyrocketing in Afghan cities. Most of the time the food does not match even if you pay. Ordinary people do not have money. They are trying to collect food by selling whatever they can. Many had the idea that the war in Afghanistan was over. The US military had gone home. The Taliban had recaptured Afghanistan. Everything will continue as before.

It is true that the full authority of the Taliban has been established in Afghanistan. Although initially resisted under the leadership of the son of the late Panjshir leader Ahmed Shah Masood, the Taliban now have absolute control over the whole of Afghanistan. But some issues are not in the hands of the Taliban. One of them is to ensure food security for the people. Ensuring food security for all in Afghanistan is not an easy task as the war-torn infrastructure collapses.

However, the situation in Taliban-controlled Afghanistan may not be the same as in Africa. The Taliban will receive some food aid from allied countries. And if the Uyghurs are not provoked, China will become a shield. Otherwise, this crisis will be prolonged. The strategy of creating a food crisis will come back again.

The United Nations has recently warned that millions of Afghans could face a food crisis if emergency food aid is not provided to Afghans. The UN is not directly talking about famine. However, many are worried about such a situation.

At least 22 million people in Afghanistan are facing a food crisis. 3.2 million children are suffering from malnutrition. The country is facing a terrible humanitarian catastrophe. But the Afghan economy is completely dependent on foreign aid. Forty percent of Afghanistan’s GDP comes from foreign aid. According to the World Bank, 10 percent of a country’s GDP comes from foreign aid, which is considered a ‘donor-dependent country’.

If social and food politics also fails, the war will end and a new dimension will be added to change the balance of world politics. It cannot be said that the balance will change completely on the basis of the Afghan war. It has been said for a long time that the centre of gravity of world politics is moving towards a new axis. The final outcome of the Afghan war will further clarify the situation, whether a new axis is emerging as a change of balance or not. However, the West can’t avoid its responsibility to address the humanitarian crisis in Afghanistan.

It is a very old strategy to suppress the opponents by creating a food crisis. The USA has withdrawn troops from the country but has used sanctions as a last resort. Afghanistan’s geographical location is not such as to lead a catastrophic food crisis. Apart from the war, there has been no calamity in the region that will cause it to start crying out for food.
The flow of foreign aid has stalled since the Taliban seized power. In addition, the World Bank and the IMF have banned the Afghan government’s assets held abroad. Added to this is the economic blockade of the USA. As a result, the Taliban government is unable to use the funds deposited abroad. According to the BBC, the salaries of many government officials and employees are stuck. Can’t withdraw money from a bank. Many people are selling various essential products for food in the market. In September, only 5 percent of Afghans had access to basic necessities. At a donors’ meeting in Geneva in September, $1 billion in emergency food aid was pledged. As of October, one-third of the aid had not reached the World Food Program. This is the latest food security situation in Afghanistan. Because of the sanctions, governments and international financial institutions have suspended transactions with the Afghan central bank.

This has led to a crisis in the Afghan currency and dollar. Afghan banks are unable to pay customers cash. They can’t even pay the import price. Even if money is transferred through online banking, it is not possible to give cash. Afghanistan’s foreign exchange reserves have been blocked and imports blocked. It is not possible to pay for food imports in dollars as the Taliban government has no control over the funds held abroad. Due to this, the food crisis in the market is intensifying due to the decline in food imports from the international market. Rather, smuggling has increased. As a result, Afghans have to buy food at higher prices.
The artificial food crisis began in Africa in the 1960s and 1970s. Food security in sub-Saharan Africa and South Africa, in particular, was at an all-time low. They had land, they had agriculture, but they did not have production. Although there was a food surplus in the world at that time. Africans were not fed because of the complex and insidious tactics of geopolitics and world politics. Africa could not get out of the food crisis and conflict. Religious extremism is now spreading in Africa after the end of ethnic conflicts and conflicts over resources. The food crisis still exists among the people of Africa, although at different times and for different reasons. At the moment, 21 million people in Eastern Africa’s South Sudan, Somalia, Ethiopia and Kenya are in need of emergency food aid. There was no need for foreign aggression in African countries. They are still reeling from the food crisis caused by man-made and natural disasters.

At the moment, it seems that the West is applying the same tactics to Afghanistan. If the food crisis continues, instability in Afghanistan will increase. That is why there are regular terrorist attacks in Afghanistan. If a food crisis is added to this, the conflict between different groups will grow, and groups and factions will increase. If somehow more instability can be created in Afghanistan, then this time the country will be occupied in a different way. In the name of humanitarian aid, the westerners can come and settle down again in a civilian way.

As it is now in Africa. In fact, Africa seems to be governed by the local people. But there is no improvement in their standard of living. Poverty could not be completely eradicated from Africa without the investment of billions of dollars. Fights, conflicts have not decreased. But most NGOs work in Africa with humanitarian assistance. UN forces are deployed in various countries to maintain peace. But peace d6es not come.
Peace in Afghanistan may not come soon. But if the Taliban, with the help of allies, could deal effectively with the situation, the Afghan war would be over. At the end of the military phase, the Afghan war has now entered the civilian phase. The military aggression has failed in Afghanistan. Now, if social and food politics also fails, the war will end and a new dimension will be added to change the balance of world politics. It cannot be said that the balance will change completely on the basis of the Afghan war. It has been said for a long time that the centre of gravity of world politics is moving towards a new axis. The final outcome of the Afghan war will further clarify the situation, whether a new axis is emerging as a change of balance or not. However, the West can’t avoid its responsibility to address the humanitarian crisis in Afghanistan.