Dealing with the TLP 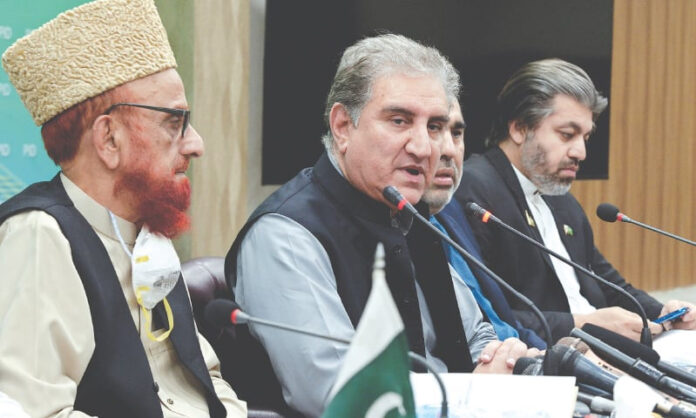 “They [TLP] come out, and block the roads. There is a limit to the state’s patience. It is your right to hold an opinion – you can have any opinion, you can be against an idea or in favour of it, but saying, ‘If you do not agree with my opinion I would charge against you with a gun in hand,’ that is not possible. The state would cease to exist this way, if we start distributing the right to violence among private groups. Therefore, in today’s meeting of the federal cabinet, a clear decision has been arrived at that under any circumstance such activity would not be tolerated. We would absolutely not tolerate anybody challenging the writ of the state.”

Thus, spoke a charged Fawad Chaudhry, blasting the actions of the-then banned outfit, Tehreek-i-Labbaik Pakistan (TLP), who have repeatedly blocked roads in provincial capital, Lahore, and federal capital, Islamabad over the past few years. Six days later, the government released 800 detained workers of the party, and a further five later, the outfit was no longer proscribed, having been removed from the list of the First Schedule of the Anti-Terrorism Act.

Chaudhry, in his stand against extremism and terrorism, often finds himself stranded by his higher-ups. The government’s decision to backtrack on its seemingly stringent stance on the Tehreek-i-Labbaik must’ve have been a déjà vu moment for the Federal Minister for Information and Broadcasting who was also left high and dry, once upon a time, by the Pakistani government during the Atif Mian saga.

“Should there be a ban imposed in Pakistan on the inclusion of the minorities in any role? Should we throw our minorities out? What kind of people are these who say this. There’s this person, about whom the entire world is saying that he would receive the Nobel Prize (sic.) in the next 5 years,” Chaudhry said.

History repeated itself, when the government trampled all over Chaudhry’s firm stance against extremism and gave in to all but one demand of the ever-protesting Tehreek-i-Labbaik Pakistan, unbanning the party early in the month and releasing the party’s detained chief last week.

The PTI’s official account had also tweeted the same line regarding the opposition arising against the selection of Princeton Professor (and Ahmediyya) Atif Mian, to the Economic Advisory Council set up by Prime Minister Imran Khan.

But Mian was “asked to step down from the Advisory Council” – on account of his faith and the resistance he was hence subjected to – with committee members Imran Rasul and Harvard Professor of International Finance and Development, Asim Ijaz Khwaja also resigning after him, in protest.

“Resigned from EAC. Painful, deeply sad decision. Grateful for chance to aid analytical reasoning but not when such values compromised. Personally as a Muslim I can’t justify this,” said Khwaja after handing in his resignation.

Atif Mian, it can be further noted, was the first person of Pakistani origin to find a place on the IMF’s list of ‘25 Brightest Young Economists’ in 2014.

History repeated itself, when the government trampled all over Chaudhry’s firm stance against extremism and gave in to all but one demand of the ever-protesting Tehreek-i-Labbaik Pakistan, unbanning the party early in the month and releasing the party’s detained chief last week.

It doesn’t end there. On Saturday, November 20, Additional Secretary General and President of Punjab province for ruling party Pakistan Tehrik-e-Insaf, Senator Ejaz Ahmed Chaudhry went to the “lion’s den” – the Rehmat-ul-lil-Alameen Mosque, TLP’s HQ – to meet Saad Rizvi, carrying a bouquet of flowers to congratulate him on his release from jail.

On the occasion, Chaudhry also visited the mausoleum of Saad’s late father and founder of the Tehreek-i-Labbaik ya Rasool Allah, Khadim Hussain Rizvi, and offered fateha there.

The Senator terms the meeting a ‘goodwill gesture’, as he delivered on a promise he made a fortnight ago.

“In accordance with my promise, I have come to meet the leader of the Pakistani political party, Tehreek-i-Labbaik, Hafiz Saad Rizvi Sahab, to congratulate him on his release and to present him with a bouquet,” Ejaz Ahmed Chaudhry said.

“It is a goodwill gesture: this is the PTI’s government, it is our responsibility to stay in touch with leadership that has a past different from others. It is the state’s responsibility to maintain a pleasant relationship with the masses of the country, so that instead of misunderstandings, consensus, peace and serenity can be achieved,” he added.

“Doors never close in politics,” the Senator continued, seeming ready to welcome a formerly banned outfit with militant tendencies into the folds of Pakistani politics.

A visibly distraught Fawad Chaudhry, on the other hand, lamented a lack of tolerance among the Pakistani masses and held responsible the government’s lack of commitment towards fighting extremism and maintaining its writ, for the current environment of civil unrest.

Natasha Shahid
The writer is a freelance columnist