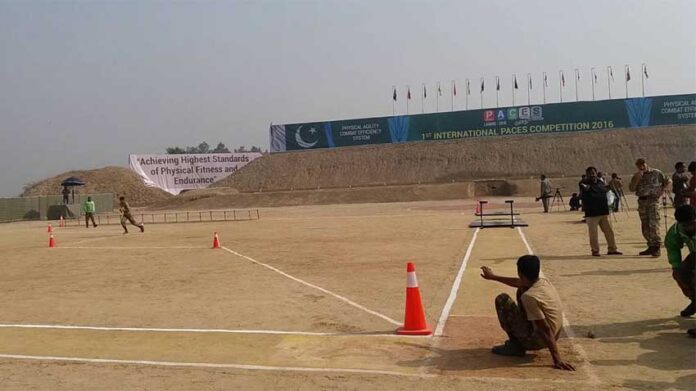 The third International Physical Agility and Combat Efficiency System (PACES) competition will be held in Lahore under the supervision of Pakistan Army from November 1 to 7.

Contingents from six countries comprising 107 military personnel including Iraq, Jordan, Palestine, Sri Lanka, Uzbekistan and United Arab Emirates (UAE) will take part in the mega event whereas Myanmar, Indonesia and Egypt will be participating as observers.

Nine teams from Pakistan Army comprising 121 players will also participate in the event.

Four international teams have already arrived in Lahore including Jordan, Palestine, Sri Lanka and UAE while remaining two teams from Uzbekistan and Iraq are likely to reach by October 3.

Earlier 1st and 2nd International PACES competitions were organised in 2016 and 2018 in Lahore.

LAHORE: While the counting of votes continues across 254 polling stations in the NA-133 constituency, considered a stronghold of the PML-N, the PML-N looks...
Read more
HEADLINES

A woman who was allegedly raped by three men in Lahore has withdrawn her case on Tuesday, stating the first information report (FIR) registered...
Read more
HEADLINES