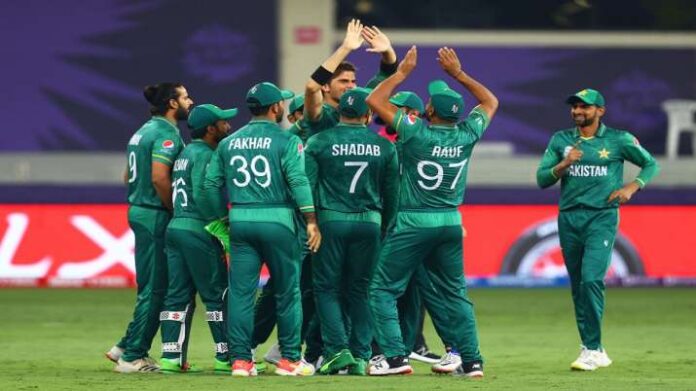 This is the second time that Pakistan have won back-to-back T20 World Cup matches. With the stadium in Sharjah erupting into celebration by Pakistani fans, Pakistan defeated New Zealand by five wickets in a nail- biting thriller clash. The credit goes to Shoaib Malik and Asif Ali who won it for Pakistan with a superb sixth-wicket partnership.

Earlier, Pakistan had produced another disciplined bowling display to limit New Zealand to 134-8. Boosted after their brilliant performance in the 10-wicket win over arch-rivals India on Sunday, Pakistan were this time led by fast bowler Haris Rauf who finished with 4-22.

Devon Conway and Daryl Mitchell were joint top-scorers with 27 each while skipper Kane Williamson made a laborious 26-ball 25.

Pakistan applied the pressure right from the start as left-arm paceman Shaheen Shah Afridi, whose three wickets against India earned him player of the match, bowled a maiden first over.

New Zealand reached 36 without loss when Rauf bowled Martin Guptill off his pads for 17. He also accounted for Conway and Glenn Phillips (13) in one over as New Zealand failed to lift the tempo at any stage.

Rauf also dismissed Mitchell Santner (six) with the last ball of the final over.

Shaheen finished with 1-21 while spinners Mohammad Hafeez and Imad Wasim also took a wicket each.

Babar, while speaking during the post-match presentation, said every victory boosts the team’s momentum, and Pakistan would take this confidence forward.
“This was a team effort — the way the bowlers bowled, spinners and Shaheen [bowled well], while Haris was outstanding,” the skipper said.
The skipper especially mentioned the team’s fielding, saying that due to excellent fielding, Pakistan was able to restrict New Zealand to a low total. Babar concluded by lauding Malik and Asif for their last over heroics.

It merits mention that Pakistan kept the same team that won against India.

DOHA: A company that sells exclusive FIFA packages to the well-heeled is predicting record sales for the World Cup in Qatar, but its owner...
Read more