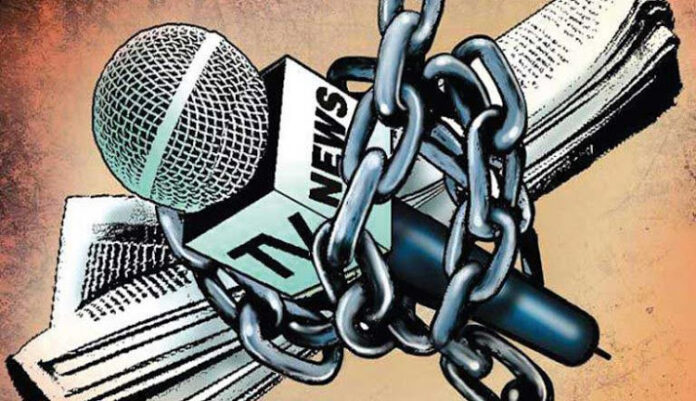 According to a press release, the meeting was held between the Federal Information Minister Fawad Chaudhry, Minister of State Farrukh Habib and representatives of the Pakistan Broadcasters Association, All Pakistan Newspapers Society, Council of Pakistan Newspaper Editors, Pakistan Federal Union of Journalists and Association of Electronic Media Editors and News Directors.

Issues relating to media regulation and proposed PMDA were discussed with the information minister. The Joint Action Committee expressed its reservations on the proposed PMDA, reported Dawn.

Senate committee briefed on the concept behind proposed media authority; minister asked to share draft law with all stakeholders

Meanwhile, the Senate Standing Committee on Information and Broadcasting met with Senator Faisal Javed Khan in the chair. The meeting was attended by ministers Fawad Chaudhry and Farrukh Habib and newspaper editors, media owners and representatives of journalists’ organisations.

The information minister briefed the meeting on the concept behind the setting up of the PMDA.

Senator Faisal Javed of the Pakistan Tehreek-i-Insaf (PTI) assured the committee that Prime Minister Imran Khan and his government would not impose any restrictions on freedom of the press.

However, the standing committee members sought details about the concept behind the PMDA from the Ministry of Information and Broadcasting.

The committee chairman said all the parties needed to work together for development of media and promotion of freedom of expression, adding that there is no draft law of the PMDA for consideration before the committee.

“We will review the draft law only after it is presented before the committee and then we will give our recommendations,” Senator Javed said.

Later, a meeting of the subcommittee of the National Assembly’s Standing Committee on Information and Broadcasting was also held. Pakistan Muslim League-Nawaz spokesperson Marriyum Aurangzeb is the convener of the subcommittee while other members are Kanwal Shauzab of the PTI and Dr Nafisa Shah of the Pakistan Peoples Party.

The meeting considered the draft law of the controversial PMDA and stressed that the information minister should share the draft with all stakeholders.

The meeting was attended by the representatives of APNS, CPNE, PBA, Association of Electronic Media Editors and News Directors, PFUJ and Parliamentary Reporters Association.