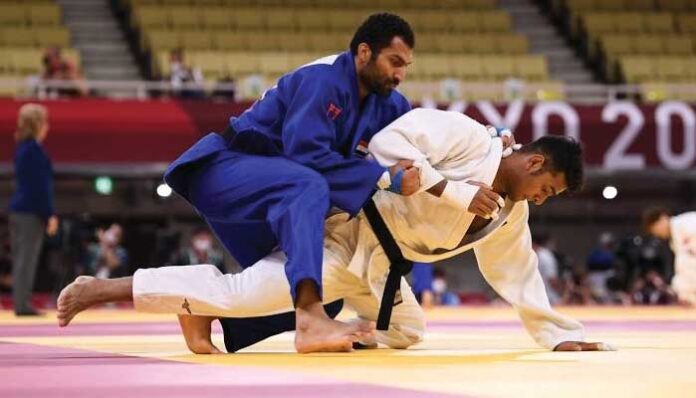 TOKYO: American double world champion pole vaulter Sam Kendricks and rival German Chiaraviglio of Argentina were ruled out of the Olympics on Thursday after testing positive for Covid-19, sending a chill through the Games as infections spiked again in the host city.

US officials confirmed that Kendricks was ruled out of the Games due to a positive test, prompting members of the Australian athletics team to briefly isolate in their rooms.

Swedish world record holder Armand Duplantis told reporters he had not been in contact with his American rival.

“I have been super lucky just not to have come into contact with him,” he said. “All the pole vaulters are pretty spooked out right now.”

Argentina’s Chiaraviglio confirmed on social media that he was out of the Games as well, and was isolating in a hotel.

The government was set to declare a state of emergency in four prefectures outside of Tokyo and extend current ones in Tokyo and Okinawa until the end of August, broadcaster NHK said.

Still, organisers have reported 193 Covid-19 cases related to the Games, a miniscule number given the tens of thousands of people involved in the event.

“It’s a bubble, and the bubble holds very well.”

Japan’s Aaron Wolf and Shori Hamada grabbed gold medals in judo finals, bringing the host nation’s haul to 15, and boosting them past China, at 14, and the United States with 13.

Japan’s place in the top spot is likely to be momentary, as China have steadily racked up gold.

China gained their first swimming gold in Tokyo with Zhang Yufei winning the women’s 200 metres butterfly. She returned to the pool shortly afterwards to help her team beat the fancied Americans and Australians to win the 4×200 freestyle relay, setting a world record along the way.

The swimming capped a morning of thrilling athleticism in the pool on the sixth day of the Games, which have been rocked by Simone Biles pulling out of gymnastic events and the early tennis exit of Naomi Osaka – moments that put the focus on athletes’ mental health – and dogged by the worsening infection figures in Tokyo itself.

Like the Chinese women, there was double gold for US swimmers, with Caeleb Dressel winning the 100 freestyle and Bobby Finke the 800 freestyle.

“I wasn’t worried about anything at all,” Dressel said after pipping defending champion Kyle Chalmers of Australia by six hundredths of a second. “It means a lot, I knew the weight was on my shoulders.”

Members of the Australian athletics team briefly isolated as a precaution after Kendricks’ infection was announced. They were later cleared to return to their regular routines.

Games procedures state that athletes who are contact-traced and have not yet competed are isolated from the rest of their squad. They then have to be tested six hours prior to their competition and return a negative result in order to compete.

Japan’s top medical adviser urged the government to send a stronger message about the growing risks from the pandemic, including to the medical system.

“The biggest crisis is that society does not share a sense of risk,” top medical adviser Shigeru Omi told a parliamentary panel. “I want the government to send a stronger, clearer message.”

The hospitalisations and infection spike add to worries about the Games, which are taking place under unprecedented conditions including a ban on spectators in most venues.

Only 26.5 percent of residents of Japan are fully vaccinated, and the rollout has hit supply snags recently. More than 60 percent of Tokyo hospital beds available for serious Covid-19 cases were already filled as of Tuesday, city data showed.

Many Japanese are worried that the influx of athletes and officials for the Games will add to the surge, while experts have warned that holding the high profile sports event sends a confusing message about the need to stay home.

In tennis, Belinda Bencic booked a place in the Olympic final with a hard-won 7-6(2) 4-6 6-3 victory over Kazakhstan’s Elena Rybakina.

Standing in front of her in Saturday’s title match will be Czech Marketa Vondrousova, who sent out Ukrainian Elina Svitolina 6-3 6-1 in an one-sided contest.

On the men’s side, 20-times major champion Novak Djokovic eased into the last four with a commanding performance over Japan’s Kei Nishikori but world number two Daniil Medvedev bowed out with a 6-2 7-6(5) loss to Spain’s Pablo Carreno Busta.

Ramadan beat Shah in the match and qualified for the next round. The Pakistani judoka’s Olympics journey ended after he lost the fight.

This was the second time that Shah was featuring in the Olympics. He had made a poor debut in 2016 in the Rio Games when he was undone by Ukraine’s Artem Bloshenko in the second round.