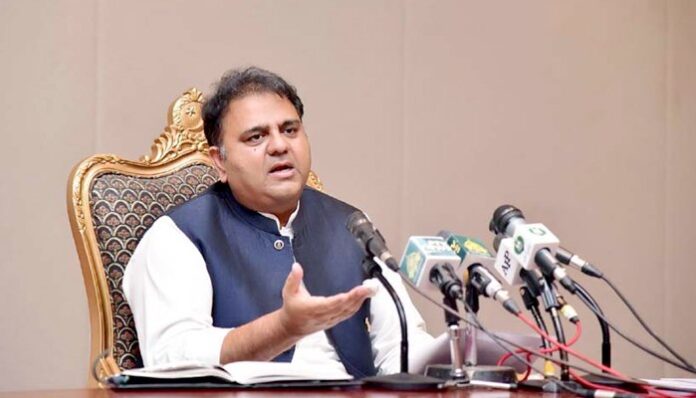 The federal cabinet has approved National Cyber Security Policy 2021 for data protection and prevention of cybercrimes, the minister said, after it was revealed that India had used NSO Group’s spyware to target Prime Minister Imran Khan’s number.
Federal Minister for Information and Broadcasting Fawad Chaudhry, while addressing a post-cabinet press briefing in Islamabad, said the policy has been introduced keeping in view the enhanced significance of the cyber regime.
He said Prime Minister Imran has asked that a “threats assessment committee” be formed to decide whether or not security be provided to government ministers and other important figures.
The information minister said “more money is spent on security for the judiciary than on government representatives”.
Chaudhry said a detailed report on protocol provided to people was presented to the cabinet, which revealed that Rs700 million in total are spent on the security detail of the president, prime minister, cabinet members, ministers, governors, chief ministers, and other high-ranking government officials.
The minister said Rs2,529 million are spent on security detail in Punjab, while Rs998 million are spent in Khyber Pakhtunkhwa.
For security arrangements for the judiciary, Rs1,400 million are spent in the three provinces excluding Balochistan.
Speaking on the July 25 Azad Jammu and Kashmir elections, he said that the prime minister belonged to PML-N, while the party had also appointed the election commissioner. “How can [they claim] rigging took place?”
“The PML-N leaders were addressing a press conference while sitting in the AJK prime minister’s office; they should accept their humiliating defeat,” the information minister said.
PM Imran Khan has directed to launch an immediate investigation into the death of two PTI workers during the July 25 elections and ordered authorities to apprehend culprits at the earliest, he said.
The cabinet also prayed for the forgiveness of the four soldiers who were martyred while performing their duties during the elections — after a vehicle of the military’s Quick Reaction Force (QRF) fell into a ravine in Laswa near Neelum Valley — the minister said.
The information minister said the federal cabinet members congratulated PM Imran Khan over PTI’s victory in the Kashmir elections.
The prime minister appreciated the efforts of federal ministers Ali Amin Gandapur and Murad Saeed as well as Chairman Kashmir Committee Shehryar Khan Afridi for running a successful election campaign in AJK.
The federal government has cleared the arrears of all the private television channels, he said, lamenting that despite receiving the payment, some media outlets were not giving salaries to their employees.
The federal cabinet also approved, for the first time in Pakistan, digital advertisement. “In a first, the Press Information Department will be shifted to digital and it will become paperless.”
The information minister said big cities have been tasked to vaccinate 40% of their eligible population in August, however, the inoculation ratio is still low.
In a bid to inoculate maximum people, vaccination has been made mandatory in government corporations, he said.
“If the voluntary coronavirus inoculations do not increase, then the option to block mobile phone SIMS of such people is available,” the information minister added.
Fawad added that the cabinet has approved Pakistanis to keep dual nationality with Czech Republic and a new policy for foreign investment in the country.
The federal minister said a new policy for foreign investment is aimed at providing security to international investors and reducing international litigation against Pakistan’s bilateral agreements.