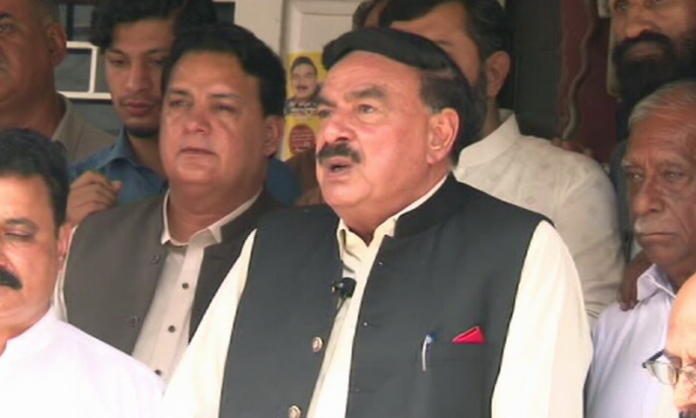 Interior Minister Sheikh Rasheed Ahmed has asserted that the so-called kidnapping of the daughter of the Afghanistan envoy was never meant to harm the daughter, but was merely a colluded attempt by Afghanistan and India to discredit and destabilise Pakistan.

Rasheed during a presser in Rawalpindi firmly denied that the taxi drivers had picked up another man during the course of Silsila’s rides, maintaining that no evidence of her abduction was found during the investigation.

“No man sat in any taxi and according to our investigation, this is not an abduction case,” he said as he repeated his earlier stance. “However, Afghans, [who are] our brothers, and Indians are trying to twist the facts.”

He added that conspiracies were also being hatched to cause misunderstandings between Pakistan and China, and create a law and order situation, referring to the Dasu bus incident.

“Certain international powers don’t want Pakistan and China’s friendship [to flourish], and hence, they perpetrated actions such as the Dasu [bus tragedy],” the interior minister claimed.

“Look at their timing. [Johar Town blast] was perpetrated just a day before the FATF [meeting], the Dasu incident took place right before the [Joint Coordination Committee] meeting [of the China Pakistan Economic Corridor] and the incident involving the Afghan envoy’s daughter took place just days before the Afghan peace conference.”

Terming these incidents a part of “hybrid warfare” against Pakistan, Rasheed said that “efforts are being made to give an [false] impression to the rest of the world that the security situation in Pakistan is not good.”

The minister further said that Prime Minister Imran Khan has instructed the inspector generals and security agencies to closely monitor the security situation in the country.

He added that despite the findings of the investigation and Silisila’s claim being starkly different, a first information report of the case had been registered and the state would fight the case on her behalf even though she has left the country.

“We have completed our investigation, but [since] we respect her [Silisla’s stance], we have registered an FIR,” Rasheed said, adding that he hoped she would soon become a part of the investigation.

Replying to a question, the minister said the footage pertaining to the case had been sent to the Foreign Office and now it was their responsibility to inform Afghan diplomats about the situation, adding that the fourth taxi driver involved in the investigation had also been traced.

He maintained that none of the taxi drivers involved in the investigation had a past criminal record that indicated their involvement in the abduction.

“This is all an effort to malign the image of Pakistan,” Rashid said, adding that as per the prime minister’s directives, the probe of the case was completed within 48 hours and the findings were sent to the FO and the PM House.

Replying to a question, he said the government planned to make the diplomatic enclave in Islamabad a special security zone after the Eid holidays.

To another question about the situation in Afghanistan, he said it was the neighbouring country’s internal matter and Pakistan would accept whatever the Afghans decide.

“The policy of the Pakistani government is clear. We will not interfere in Afghanistan. We will not let anyone use our land against Afghanistan and expect the same in return.”

He also assured that Pakistani forces and civil institutions were prepared to deal with the fallout of growing violence in Afghanistan.

Earlier on Sunday, the interior minister told a news conference that the abduction case of the Afghan ambassador’s daughter would be solved within 72 hours.

The interior minister said that footage of her trip from Rawalpindi to Daman-e-Koh was missing and the matter was under investigation.

He said that the “riddle” would be solved by the evening and all aspects of the case would be unearthed, reflecting some gaps in the statement of the victim.

Later on the same day, the interior minister told the media that the kidnapping allegations were suspicious as the investigation has revealed all the facts.

“There is a clear difference between the evidence of the investigation and the statement of the Afghan ambassador’s daughter. In the CCTV footage, the girl was walking in the market of Islamabad, Rawalpindi and later Daman-e-Koh,” he said.

He also said that the investigation had revealed that the Afghan ambassador’s daughter had lied and no incident of kidnapping had taken place.

“The Afghan ambassador’s daughter said her phone was snatched. But the phone was recovered from her,” he said.

The minister said that the envoy’s daughter had changed four taxis and no kidnapping allegation was proved.

A medical examination report, shared on social media and later confirmed by the Pakistan Institute of Medical Sciences where Alikhil was treated, said that she was admitted with swelling and rope marks on the wrists and ankles.

The report said that she was held for more than five hours and also noted that she had some swelling in the brain’s rear occipital region.

Social media activists took to the social media site, Twitter, to register their protest over the Afghan government’s decision to recall its diplomatic staff from Islamabad.

“Why should not #Afghan Embassy be handed over 2 Taliban who controls 80 percent of Afghanistan. Kabul regime has no longer functional internal sovereignty. Send Afghan Ambassador back. Recognise de-facto Taliban govt as de-jure Afghan govt,” tweeted Jan Achakzai, a noted columnist and political commentator.

WASHINGTON: National Security Advisers of Pakistan and the United States have agreed to "sustain the momentum in Pak-US cooperation" at their follow-up meeting in...
Read more
HEADLINES

The Karakorum Highway between Chilas and Gilgit was again blocked for all types of traffic. The road was hit by landslides at Raikot to Lal...
Read more
HEADLINES

July 30, 2021
WASHINTON: The first flight carrying Afghans who worked as interpreters for American troops and diplomats has arrived in the United States, President Joe Biden...