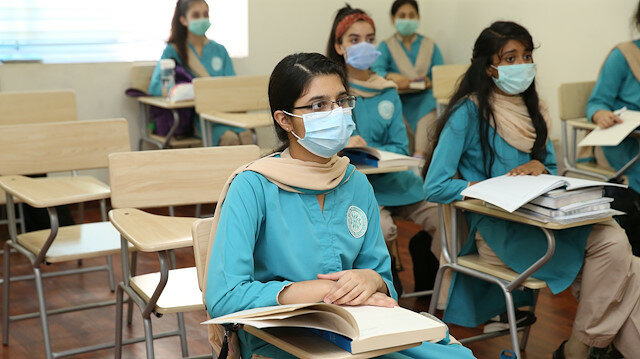 ISLAMABAD: A large number of students from across the country reached outside the Higher Education Commission head office to press for their demands for cancelling the physical exams and asked Education Minister Shafqat Mehmood to resign from his office.

A number of students were detained by the police; however, they announced they would continue their sit-in till the approval of their demands.

Senior Superintendent of Police (Operations) Dr Mustafa Tanveer told a local news station that the students had started gathering outside the Higher Education Commission (HEC) office between 10:30 am and 11 am.

However, as the number of protesters increased, they blocked Ninth Avenue, he said. “We were told to use force to clear the road for traffic,” he added.

The police then detained around a dozen students and used force to disperse the protesters and clear the road for traffic, the official said. The students were later released.

The students chanted slogans against Education Minister Shafqat Mehmood and the government for conducting physical and demanded cancellation of the examinations.

The protesting students said that the government taught them via online classes so they were not prepared enough for the exams. The protesters demanded Shafqat Mehmood’s resignation over the conduction of examinations.

A similar protest also took place in Rahim Yar Khan where students demand online examinations or cancellation of the exam instead of physical exams.

The state of examinations this year has been rather tenuous. Last month, the government allowed all students, who wish to seek admission in medical and dental colleges, to take the MDCAT examination even if they have not yet taken their intermediate or A-level exams.

The decision was taken during a joint high-level meeting held here Thursday under the co-chair of Minister for Federal Education and Professional Training Shafqat Mahmood and Special Assistant to Prime Minister on Health Dr Faisal Sultan.

The meeting aimed to ensure the admission of intermediate (Pre-medical) and A2 Cambridge students to public and private medical universities of Pakistan.

Disruption was caused in the current academic year and exams due to Covid-19.

The meeting discussed various options to save the academic year of A2 and FSc pre-medical students and ensure their timely admission in the public and private medical universities across the country.

The Pakistan Medical Council informed the minister that as per the PMC Undergraduate Education (Admissions, Curriculum and Conduct) Regulations 2021, all students who wish to seek admission in medical and dental colleges can take the MDCAT examination even if they have not yet taken their FSc pre-medical or A-level exams.

The MDCAT exam will be conducted from August 30 to September 30. All students, who will be taking their A-Level exams in October, can take the MDCAT exam in September and apply for admissions to medical colleges before their exams are held.

The admissions are to be finalised in medical and dental colleges by January 15, 2022, as per the PMC regulations.

The meeting agreed to accommodate the students, taking their A-level exams in October and expecting results in January 2022. Each medical and dental college and university will be directed not to finalise the admissions of students, who will be taking their A-levels in October, as the admissions of those students will be finalised after the declaration of results of A-level exams in January 2022.

For this purpose, the PMC will permit colleges to finalise admissions on these special category seats by February 10, 2022.

The PMC vice president also requested the federal minister for education and SAPM on health to consider using only elective subjects’ results this year for merit creation in public colleges as the FSc exams are being held for elective subjects only.

The PMC is already considering a policy on these lines for private colleges.

The minister and SAPM reaffirmed that the incumbent government is absolutely focused to address the education emergencies due to Covid-19, and said no stone would be left unturned to provide the students fair opportunities for their career path.

It was also agreed that the ministry of federal education will closely coordinate with provincial governments for the smooth implementation of this agreed policy.

On June 7, the schedule for exams of grades 1-8 was been announced to take place from July 18-30, according to Punjab Education Minister Murad Raas.

Report cards will be issued by July 10, as per the notification.

The minister took to Twitter to share the schedule for the School-Based Assessments as educational institutions in most parts of the country started reopening Monday. All schools in the country have reopened except for primary classes in Sindh, as Covid-19 cases decline after a deadly third wave.

“Please follow SOPs issued by the government,” read the notification.

Schools, colleges and universities have started holding in-person classes with strict SOPs in place to keep the pandemic in check.

The National Command and Operation Centre has allowed authorities to resume physical education in districts where the positivity ratio is less than 5 percent from May 24 in the first phase, while those with a higher prevalence of the virus were scheduled to open from June 7.

The Sindh government, however, had decided to extend lockdown restrictions due to the higher positivity rate in the province and kept schools closed for another two weeks.

In January, the HEC took note of the concerns raised by students that their examinations should be conducted online.

The apprehensions of students were reviewed carefully in consultation with the VCs of all the provinces and regions, keeping in view the difficulties brought about by the pandemic as well as the opening of universities from February 1.

The official mentioned that the three-hour meeting had ended without a definitive conclusion as the VCs present were split on the decision to hold online examinations while it was noted that some universities had already taken students’ final exams online.