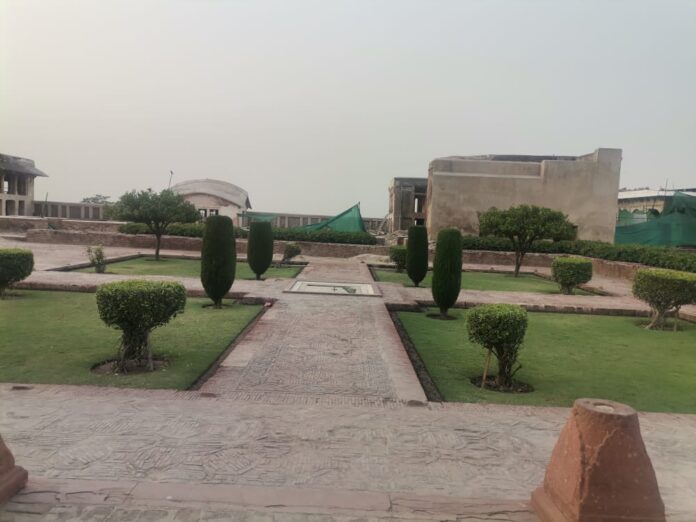 The government of Punjab had allocated Rs27 million for both the projects.

Both the places were established behind the Jahangiri Quadrangle and used during the reign of Mughal emperor Akbar. The Paien Bagh was a garden for the females of the fort.

An official on duty informed that the conservation project includes consolidation and repairing of the old structures and pointing and lime plastering of the walls and roofs. “The flooring and other repair work of the Paien Bagh is also under process. We are working as per the international standards for conserving different monuments in the Lahore Fort,” the official explained.

A heritage lover, Ahmed Mohsin, while roaming around in the fort, expressed his gratitude over the ongoing conservation work in the fort. “I am glad that old neglected areas of the Lahore Fort are being conserved by the WCLA. We did not even know about these areas, but with the placements of history boards and information, we are now able to know more about these places,” he added.

Another tourist, Rehana Dar said, “The work is going on in the Lahore Fort, but sadly we cannot see those places because the WCLA has cordoned off those areas. I hope we will soon be able to visit these monuments in the fort as soon as they are conserved.”

An architecture photographer, Mohammad Shoaib, expressed his excitement over the conservation of the Paien Bagh and Shahi Hammam of the Lahore fort. “I have many photographs of the Lahore Fort, which were taken around twelve years ago when I had started photography. Now when I match the present pictures with the old ones, I see a vast difference. The fort has really been beautified and I appreciate the WCLA for this. The work done for improvement of gardens has also given the fort a new and fresh look,” Shoaib said.

WCLA Director Conservation Najam Usaquib informed that an amount of Rs27 million has been allocated by the government of Punjab for the conservation of both the historic sites. “The WCLA had started the conservation of both the sites in March this year. The Paien Bagh project will be completed by August this year while the Shahi Hammam project will be completed in March, 2022. The work is complicated because it has been neglected since long. Once conserved, these monuments will be illuminated and made a part of the night tour of Lahore fort,” he added.

WCLA Director General Kamran Lashari said that it is a high time to give a new life to many neglected sites as after conservation, these places will give a new charm to the beauty of the fort.

“Within the given resources, the WCLA is trying its best when it comes to the conservation and promotion of the historic sites and heritage. It is our mandate to make the fort more and more glorious for the tourists and heritage lovers. The Lahore Fort is a world heritage site and we are following all international standards and practices while conserving and restoring it,” Lashari said.

The protests in Kazakhstan are completely unjustified, and show what a namby-pamby bunch the Kazakhs are. Just imagine, they’re protesting over the rise in...
Read more
LAHORE

A woman who was allegedly raped by three men in Lahore has withdrawn her case on Tuesday, stating the first information report (FIR) registered...
Read more
- Advertisment -