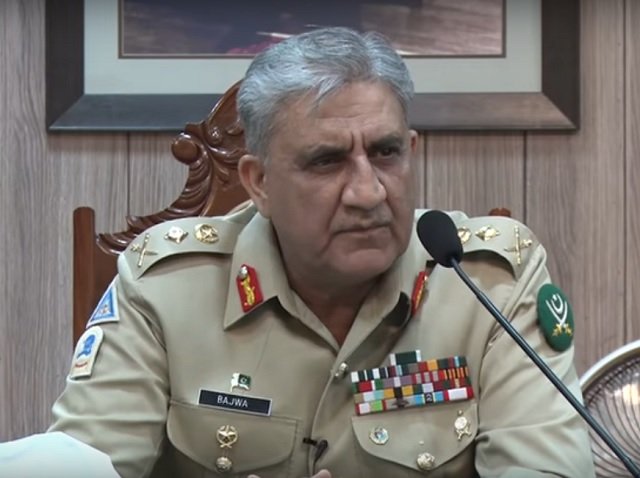 RAWALPINDI: Chief of Army Staff General Qamar Javed Bajwa has appreciated the role of the business community in the economic uplift of Pakistan and reaffirmed the army’s complete support to it.

According to a statement issued by the Inter-Services Public Relations on Wednesday, the members of Federation of Pakistan Chambers of Commerce and Industry called on the army chief. During the meeting, FPCCI’s role in the development of commercial and industrial hubs in Pakistan as well as the evolving regional economic environment were discussed, it added.

The army chief lauded the role of the businesspersons in the economic wellbeing of Pakistan and affirmed Pakistan Army’s complete support, read the official communiqué.

The ISPR further said that the delegation acknowledged Pakistan Army’s role and sacrifices in providing a secure enabling environment for economic prosperity in Pakistan.

During the meeting, the statement read, matters of mutual interest, progress on the China-Pakistan Economic Corridor and regional security situation including the latest developments in the Afghan peace process were discussed.

The COAS thanked the dignitary for China’s contribution towards the fight against Covid-19 and the provision of vaccines to Pakistan, the official statement said.

General Bajwa also felicitated the dignitary for holding a grand ceremony in Beijing on the occasion of the 70th anniversary of Pak-China diplomatic relations.

Last month, the army chief met with US Charge d’ Affairs Angela Aggeler and hoped for “greater cooperation” between Pakistan and the US in all domains. The meeting was a part of ongoing efforts by the US to seek a political end to the Afghan conflict.

The army chief said that Pakistan has sincerely supported the peace process and a prosperous, stable and peaceful Afghanistan was in the best interest of the region in general and Pakistan in particular.

The US dignitary acknowledged and appreciated Pakistan’s continuous efforts and support for peace and stability in the region and pledged to further enhance bilateral relations between both countries.