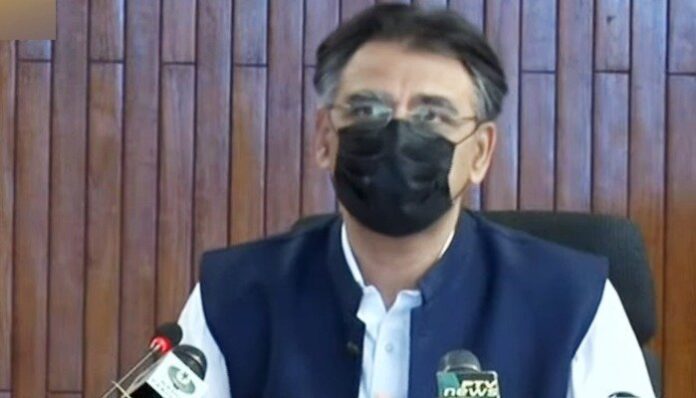 ISLAMABAD: Federal Minister for Planning, Development and Special Initiative Asad Umar has announced that allocation of Rs2,201 billion has been approved for the development programme for the next fiscal year.

Asad Umar, while conducting the media briefing on Tuesday regarding the allocations for the Public Sector Development Programme, said that the volume of PSDP allocation was increased up to over 36 percent for the fiscal year 2021-22.

The federal minister said that five percent budget allocation will be spent on science and technology and information technology (IT). The projects worth Rs240 billion are approved that would be completed with the collaboration of the government and private sector. The projects include Sialkot-Kharian and Sukkur-Hyderabad Motorways while Karachi Circular Railway (KCR) project will also be completed through public-private partnership, said Umar.

He said that Rs85 billion has been allocated in the new budget for three big dams to irrigate over 300,000 acres of land. The federal government will spend Rs100 billion in the next fiscal year to improve the power distribution system. He said that the Centre has doubled the funds for higher education in the previous two years. In the fiscal year 2021-22, Rs14 billion will be allocated to plant 10 billion trees across the country.

Asad Umar further said that Rs54 billion have been allocated for the uplift of the newly-merged districts of former FATA, while Rs87 billion are allocated for the projects of the China-Pakistan Economic Corridor (CPEC).

Dismissing reservations of Sindh Chief Minister Murad Ali Shah, Asad Umar said the Centre is spending “billions of rupees” on several projects in the province. “Centre works for the welfare of Sindh’s people and not for its government,” he said.

Umar while responding to CM Murad’s objections said any province including Sindh cannot dictate the Centre about the federal development budget.

The minister said the federal government was even taking care of garbage, building streets and drains in Sindh. “It’s not our job and it’s the duty of the provincial government,” he remarked.

Umar said the federal government was also working on water projects worth billions of rupees in Sindh to resolve the chronic issue.

“The Sindh government has not developed a single inch of motorway in the province. All motorways are being developed by the federal government through public private partnership,” he added.

The Sindh chief minister last week expressed his reservations over the upcoming budget, saying that ever since the PTI-led government had come to power, it had been “biased” towards the province.